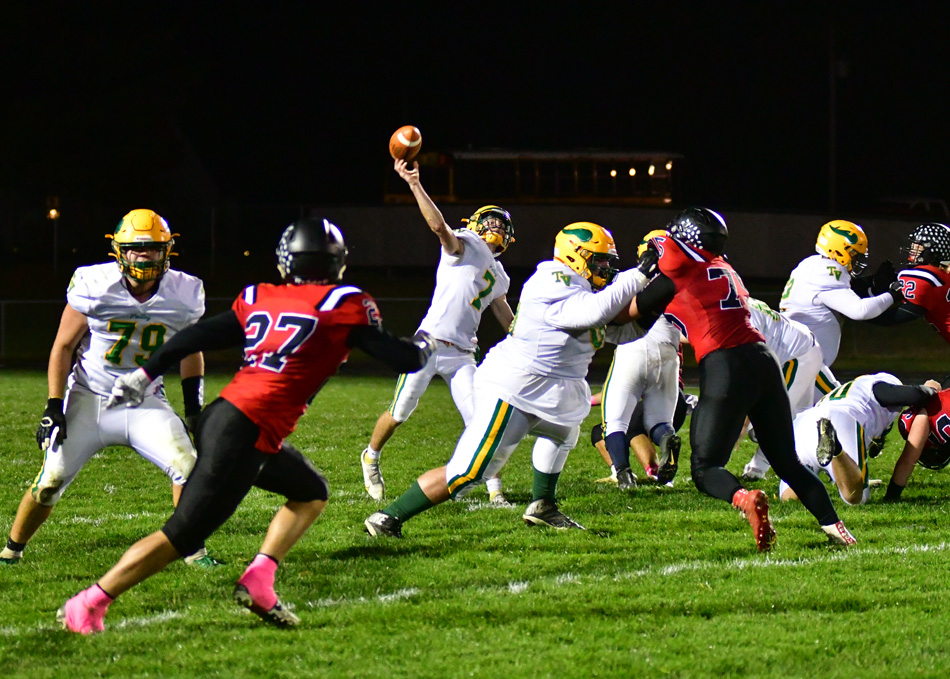 Branson McBrier and the Tippecanoe Valley offense are scoring over 45 points per game this season, but have scored just 35 total points in the past three seasons against Southwood, including just eight in 2020’s loss. InkFreeNews file photo by Mike Deak

AKRON – The Tippecanoe Valley Vikings have worked all year to put themselves in a position to win a Three Rivers Conference title. This Friday, the moment will be finally here. The matchup won’t be a typical game for this high-powered Valley squad though. This week, the hated Southwood Knights come to Death Valley, the same Southwood team that hasn’t lost to Valley since 2012.

In fact, after a controversial one-point overtime win in 2018, things have seemed to progressively get worse for Valley’s fortunes in the series. In 2019, a late score gave the Knights a 21-7 win and in 2020 the game was never really close. That matchup saw Southwood cruise to a 32-8 victory. Valley, which clinched a share of the TRC title last week in its win at Wabash, is looking for the outright title in what amounts to a fourth straight year against the Knights (4-4, 4-3 TRC) with the TRC on the line.

“This is a different year, and we have the potential to win the conference outright,” said Tippecanoe Valley head coach Steve Moriarty. “So we are trying to stay focused on the task at hand. [We must make] sure we mentally prepare for any formation that might throw at us.”

Moriarty and the Vikings have every reason to feel good heading into Friday’s matchup. Through the first eight games of the 2021 season, Valley has decimated opponents with an explosive offense and suffocating defense. The Vikings offense is averaging 45.5 points per game this season thanks in part to the plethora of weapons.

Seniors Braden Shepherd, Branson McBrier, Jamasyn Virgil and Rex Kirchenstien give Valley an experienced offensive core that can get the job done both through the air or on the ground. McBrier, the headmaster of the Vikings offense, has played lights out all season. Through the first eight games, he has just one interception while throwing for 11 touchdowns and nearly 1,000 yards. That group is even more dangerous when they pull the ball down and decide to run. The Vikings have a multi-headed stable of backs that have terrorized defenses all season. Both Shepherd and Virgil have rushed for over 500 yards and have 12 and seven touchdowns respectfully. That could spell trouble for a Southwood team that has been gashed by the run on multiple occasions this year.

The Southwood offense is similar to that of Valley in that it comes with a steady balance of rushing and passing. Junior Morgan Lloyd is the bell cow for the Knights, rushing for 691 yards and 15 touchdowns. Also serving as the team’s quarterback, Lloyd has passed for 850 yards and seven touchdowns. The Vikings will undoubtedly be focused on shutting down the junior playmaker.

Defensively, though, the Vikings have been stout. The team is allowing just 5.4 points per game in its seven TRC victories, three of those wins shutouts, the first time Valley has pitched three shutouts in a season since 2012. Should Valley lose Friday night, it would still claim the outright TRC title if Peru loses at Manchester.

Of course, it would be easy for the team to overlook the Knights and turn their attention towards a sectional matchup against Garrett. Fortunately, that doesn’t appear to be a problem for Moriarty’s mature group.

“The players know that they have a lot to lose if they do not come ready to play, so winning the Conference outright has kept them focused this week,” said Moriarty.

Kickoff for the game at Smith-Bibler Memorial Field will be 7 p.m.