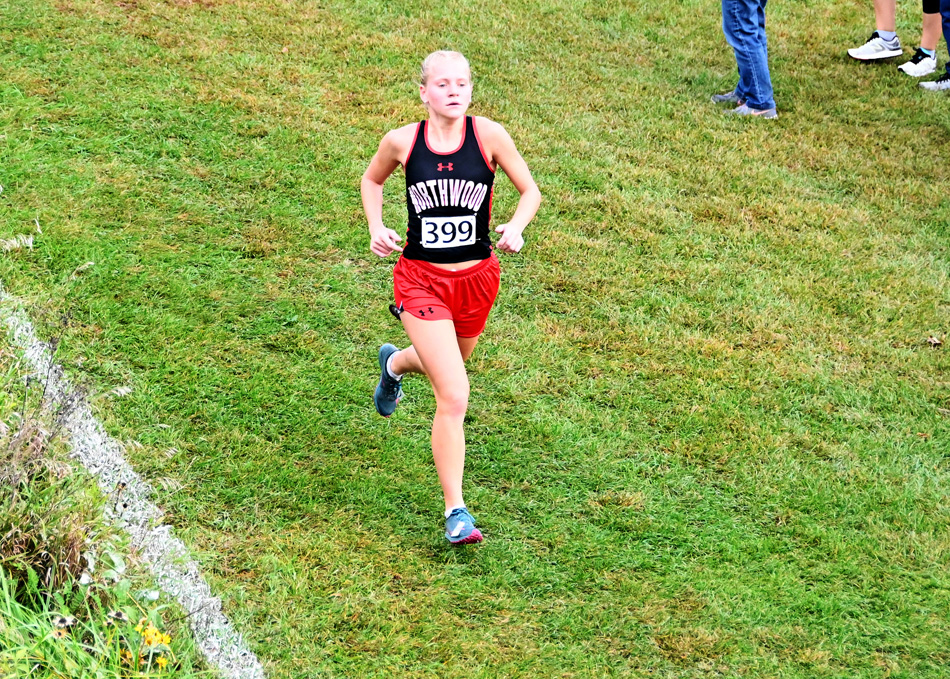 NorthWood’s Kaitlin Burden looks to repeat the success she had at the Elkhart Cross Country Sectional, where she finished second overall. InkFreeNews file photo by Mike Deak

ELKHART – It’s the same ol’ cast of characters coming together this weekend at the Elkhart Cross Country Regional, and the objective remains the same, “survive and advance”.

The Northern Indiana Conference/Northern Lakes Conference representation is super strong once again at Ox Bow for this Saturday, as all 10 of the eligible teams competing in each race are represented by teams from just the two conferences. Penn, Northridge and Goshen highlight the boys race and Penn, Ridge and Elkhart should make for a great team showdown on the girls side.

Superstar runners Mariano Retzloff of Penn, one of the top runners in the state, comes in as sectional champion, but his time of 16:34 at Erskine pales in comparison to what transpired at Ox Bow, where Northridge’s Jack Moore and Goshen’s Drew Hogan were in a dead heat at 15:32, Moore getting the nod by a toenail. Goshen’s Cole Johnston came home at 15:53, and a total of six runners at the Elkhart sectional topped Retzloff’s time, but figure to assimilate with the South Bend runners as they push one another through the course.

Between Ridge, Goshen and Penn, the three have won eight of the last nine regional titles. Memorial, which joined Central to become Elkhart Megatron, had the only other regional title in 2018. Goshen is the defending regional champion, and won the sectional a week ago at Ox Bow, Penn winning handily at Erskine.

Same with the girls, as Northridge has the dynamic duo of Tame Baylis and Haylee Hile at the top of its order, and Penn brings the power trio of Julie Smith, Julia Economou and Ellie Stabnik. The two teams have been the alphas at the regional, claiming the past nine titles between them, Penn in 2020 and Ridge in 2019.

Quietly, NorthWood is floating under the radar in both ledgers. The Panthers were third in both the Elkhart sectional races, the girls enjoying a runner-up finish from Kaitlin Burden to boost its merits and Brady Hunsberger a top 10 for the boys.

NorthWood’s prospects will hinge upon whether its 4-5 runners can stay with its 2-3 runners. The Lady Panthers had a significant gap between Emilie Allen and MacKenzie Brewer and then to its four/five of Savannah Slone and Sydney Prenkert, and even Emma Davidhizer, who fell a little off the pace she had been during the season.

The Panthers, which has seen Jordan Burden take a step forward as a solid racer, has brought along Owen Allen as a three-headed attack at the top, but Wood needs the likes of Cole Davies, Daniel Medina and Grady Stevenson to pick up the pace with the likes of South Bend Adams and Mishawaka joining the team dash.

Wawasee will send five out to test its fortunes. The Lady Warriors have Jasmine Hernandez, Lily Tyler and Trinity LaJoice all in the field, as are Warriors Cade Beer and Harry Doss. Wawasee’s two teams were knocked out of the team competition last weekend, the girls by a few points to rival Goshen.