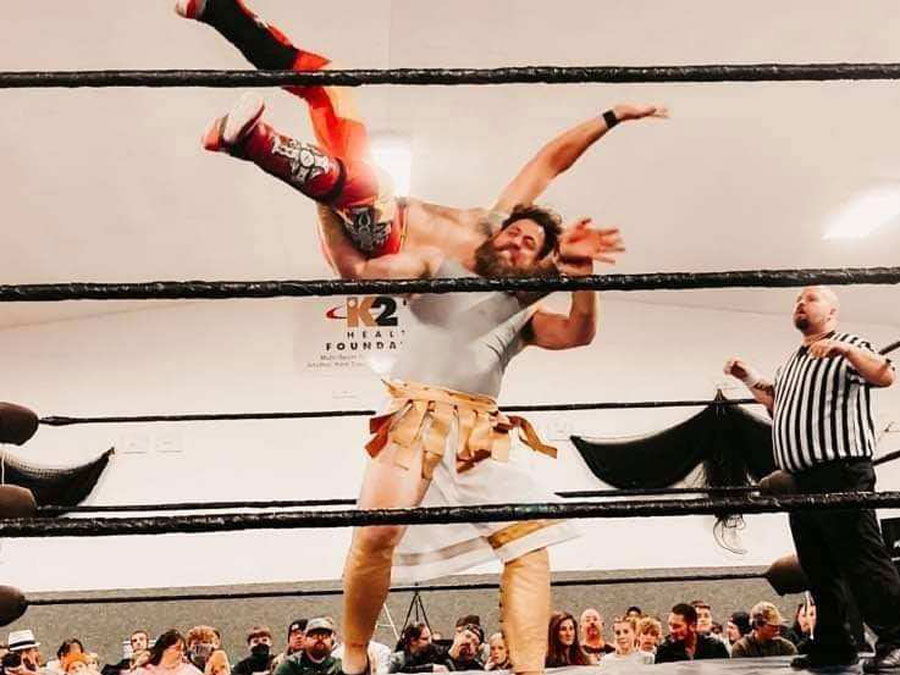 KOSCIUSKO COUNTY — Growing up in Silver Lake, Dugan Julian and his brother loved watching pro wrestling. In fifth grade they moved to Indianapolis and met kids in their apartment complex who were just as into it as they were.

Untrained and unsafe, they decided to try to replicate it, and as they grew in the sport they learned how to become safe with it.

At the age of 10 or 11, they would have 12 kids holding roughly 10 matches with no adult supervision, using their own or real characters, costumes, title belts, and brackets to tell the stories. They got so good during these “backyard shenanigans,” in between apartment buildings, they would have adults they didn’t even know coming out to watch them.

That was when Julian knew he wanted to become a pro wrestler. After high school, he joined the Marine Corps. Even after moving away from home he watched wrestling religiously and hosted a wrestle mania watch party with the guys in his unit every year. 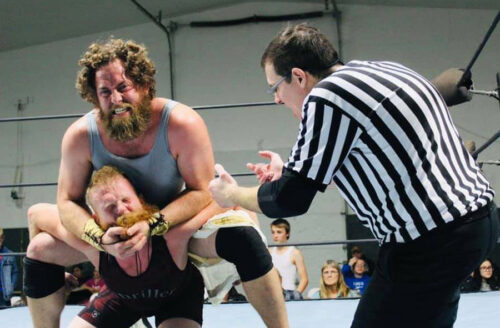 His first year back he saw a flier for Funkdafied Wrestling Federation and his all-time favorite cruiserweight wrestler was on the roster. He took two of his daughters to the show and after talking with his childhood hero, he was hooked. He had no idea there was pro wrestling in town and decided to look into it finding two of his high school friends were in FWF.

After two years he finally reached out to them, and a month later he joined being told he would train for about two to three months before he even stepped into the ring. Instead, he was put into a massive royal on day one, on day two he won and got drowned out by boos, which he loved. This is where he got his title as Simon Socrates.

To Julian wrestling is live storytelling, and unlike a play or stage acting there is so much improvisation. There’s no redo, no editing out, it just is what it is. Not only that but you have to adjust to your crowd and your partner. Everyone is fully immersed from the time the first fan walks in the door until the last one walks out. The phrase “the show must go on” is truly put into play here.

Not only does wrestling allow Julian to have fun but he also has met so many interesting people. “Who would’ve ever thought that some of the people that I’m closest to in the world right now I would meet in sparkly underpants while fake fighting. We’re like stunt men who took improv classes.”

In wrestling nothing matters besides the story they want to tell in the ring, there’s no political ideology, there’s no religious bigotry, everything is gone. “The locker room is like a giant Switzerland,” Julian said. Once in the ring, it’s only the characters existing not the people themselves.

Outside of wrestling, Julian works for a nonprofit that provides invasive species management. He has four kids, is involved with his church and so many other things that keep him busy. His wife is not into wrestling but is along for the ride with it. “She’s very much a background supporter.”

Although Julian did not start his dream of becoming a pro wrestler until he was 32 he did everything needed and dedicated himself to a craft to make it to where he is. “Lifetime dreams don’t have to be dreams, it’s never too late, there is no too late. If you didn’t hit it when you thought you did it doesn’t mean you can’t hit it, it just means you might have to work harder, but the hard work is almost always worth it.”