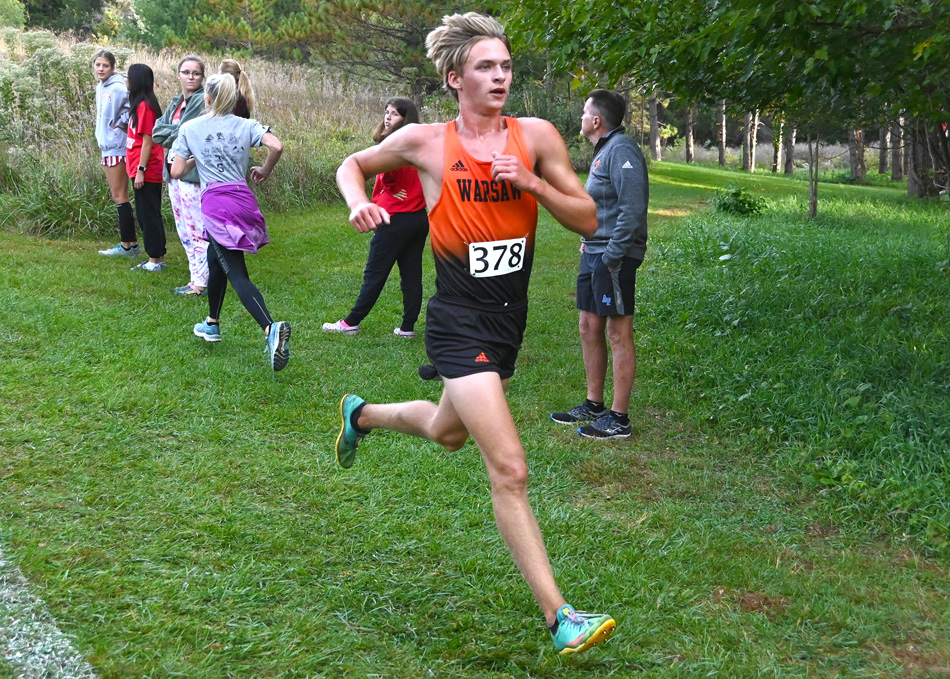 Warsaw’s Garrett Hall was among the selections for All-NLC for the 2021 cross country season. InkFreeNews file photo by Mike Deak

It was a split decision after two months of running for the girls. Northridge won the regular season with a pair of one-point win over Warsaw, but the Lady Tigers won the conference meet to split the hardware. Co-coaches of the Year Ryan McClane of Northridge and Jason Fleming of Warsaw had their runners fill the lists. Northridge’s Tame Baylis, Haylee Hile, Emma Long and Clare Ritchie were All-NLC, as were Warsaw’s Joey Rastrelli, Wini Barnett, Regan Brouwer and Mikayla Mimnaugh. Ava Knight and Elizabeth Vander Bie of Warsaw were also named Honorable Mention.

Co-coaches of the Year was the theme in the boys ledger as well, with Goshen’s Mike Wynn and Warsaw’s Jim Mills sharing the honor. Goshen ran away with the title, literally, led by the quartet of Cole Johnston, Drew Hogan, Tommy Claxton and Luis Loera leading the All-NLC list. Garrett Hall of Warsaw also made the First Team.

Northridge had the trio of David Gingerich, Jaxon Miller and Jack Moore, Mishawaka the duo of Ryan Hoopingarner and Liam Bauschke, along with Concord’s Anthony Roberts and NorthWood’s Brady Hunsberger.

The TRC makes it academic with its picks, taking the top 12 from the championship meet and calling it good.

The Zebras also won the boys title, and had Peyton Hiatt, Dylan Steininger, Samuel Rohr and Wesley Steininger on the list. Maconaquah had the race champion in Isaiah Wittenberg, and was joined by teammates Kaden Miller and Daylen Schrock. Wabash’s Kaden Vogel, Peru’s Aiden Stewart, and the Manchester trio of Raven King, Cade Jones and Lane Stetzel were also on the list.