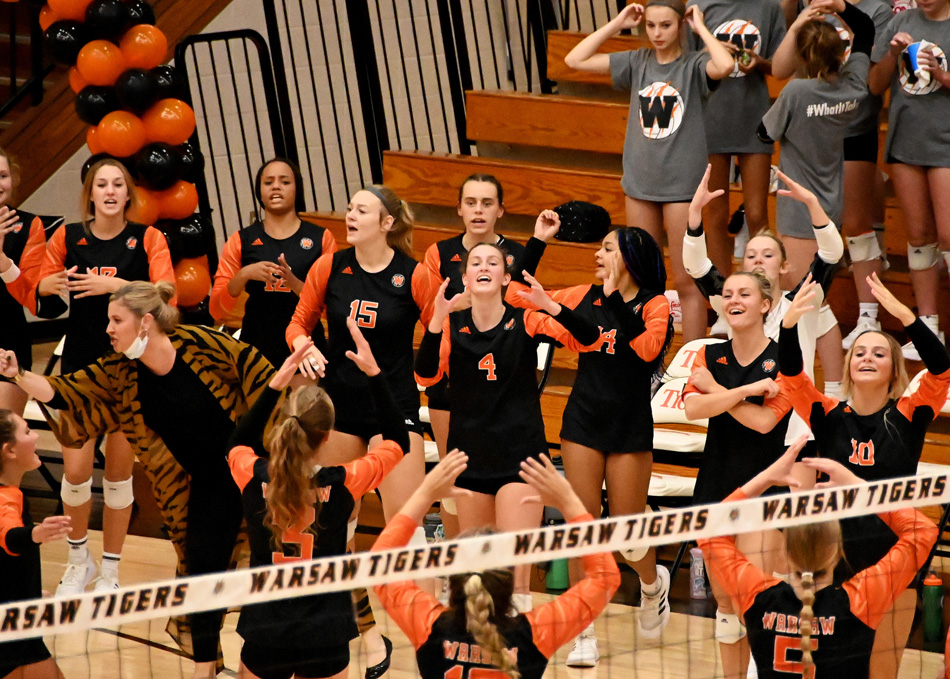 Warsaw hopes to be celebrating on Oct. 16 as part of the Concord Volleyball Sectional. InkFreeNews file photo by Mike Deak

INDIANAPOLIS – A very good regular season for several area teams will see them all start 0-0 ahead of the IHSAA volleyball state tournament.

The golden anniversary of the tournament, which started in 1971, has tournaments begin on Oct. 12 with sectional championships all marked for Oct. 16.

A good bit of intrigue surrounds the Class 3-A tournament at Lakeland, where No. 5 NorthWood (25-2) will have to win three games to repeat as sectional champion. The Panthers will start with host Lakeland (7-14) in the second game Thursday, with Wawasee (20-9) waiting for the winner on Saturday. On the north side of the Lakeland bracket is West Noble (4-18) and Tippecanoe Valley (19-10) in Thursday’s first game, the winner getting Jimtown (12-13) in the semi-finals.

The Class 3-A regional at Norwell on Oct. 23 could feature some big guns with the likes of No. 2 Dwenger, No. 3 Wapahani and No. 4 Bellmont all potential feeds to the regional, as could state powers Fort Wayne Concordia, Muncie Burris, Heritage, Northwestern and Angola among others all vying for tournament advancement. The Lakeland winner will get the winner from Peru.

The No. 1 team in all the land will be on display at the Concord sectional when Penn (30-0) opens the tourney with Goshen (8-19) in the first game Thursday. The host Minutemen (19-8) have quietly pieced together a nice season, and will get the Penn-Goshen winner. On the other half of the draw is Warsaw (17-13), which will look to topple Elkhart (18-10) in a rematch the Lions won at the Mishawaka Invite in August. Both of the opening games will take place on Thursday, Oct. 14. Waiting for the Warsaw-Elkhart winner will be Northridge (15-14).

The winner at Concord will play the Plymouth sectional winner in the morning at the Class 4-A LaPorte regional.

A couple 1-A sectional of note include the Triton bracket, where the host Trojans (19-10) open with LaCrosse (1-19) to start its quest to defend its sectional crown. At Southwood, Lakeland Christian (1-6) will have the toughest assignment in the class in taking on defending state champion Pioneer (19-9).