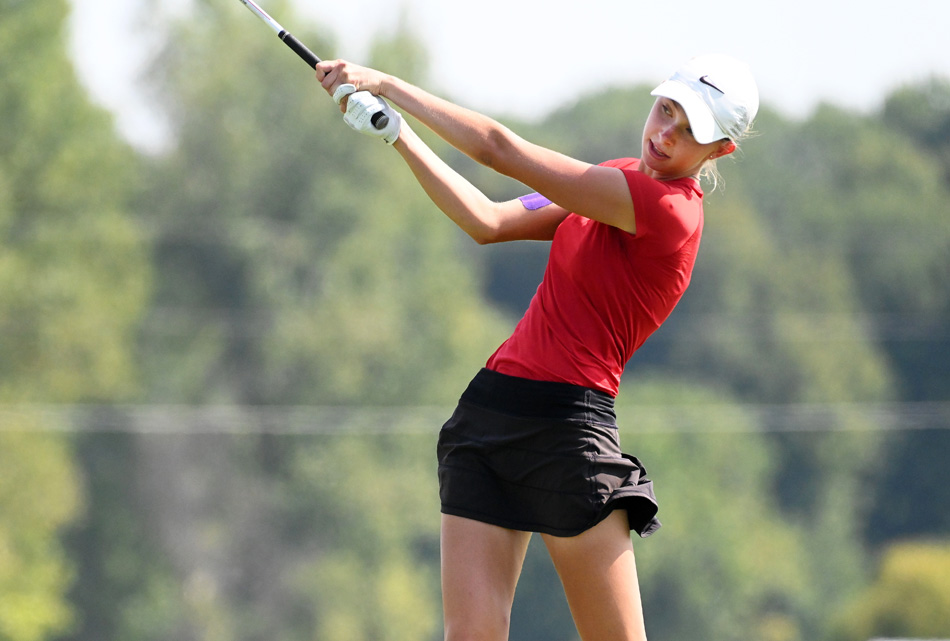 NorthWood’s Cybil Stillson sits tied for 13th on the leaderboard after day one at the IHSAA Girls Golf State Finals. InkFreeNews file photo by Mike Deak

CARMEL – Cybil Stillson didn’t set the world on fire on Friday like she did a week ago, but is still in the hunt for an individual state championship after the first of two days at the IHSAA Girls Golf State Finals.

Stillson, after shooting a state record 62 a week ago at Noble Hawk in the regional, didn’t record anything lower than par in her round of 77. Stillson, who had five bogeys, sits tied for 13th in the standings. Macy Beeson of Lapel and Chloe Johnson of Evansville North are both sitting atop the board at two under with rounds of 70.

“Cybil was just a little off with her irons today and didn’t get a lot of really good birdie looks,” said NorthWood head coach Adam Yoder. “That’s golf, sometimes, but for individual status, the bright side is that this only half over, and she has ample opportunity to climb the leaderboard.”

Breanna Goss came in at 85, Riley Kitson at 95, Kira Schrock at 116 and Bella Sechrist at 118 for the Panthers, which are sitting at 373 and 11th overall in the team standings, but 20 shots back of Floyd Central’s 353 for 10th. Not one NorthWood golfer shot anything lower than par on any of their rounds on Friday at Prairie View Golf Club.

Evansville North is the clubhouse leader at 302, a comfortable 15 shots ahead of Homestead in second. Culver Academy is fourth at 322. Penn is at 382 and 13th.

“What a fantastic day to play golf at the IHSAA State Finals,” Yoder said. “We’re very pleased with our 11th place standing at the halfway point, and feel very confident going into tomorrow.”