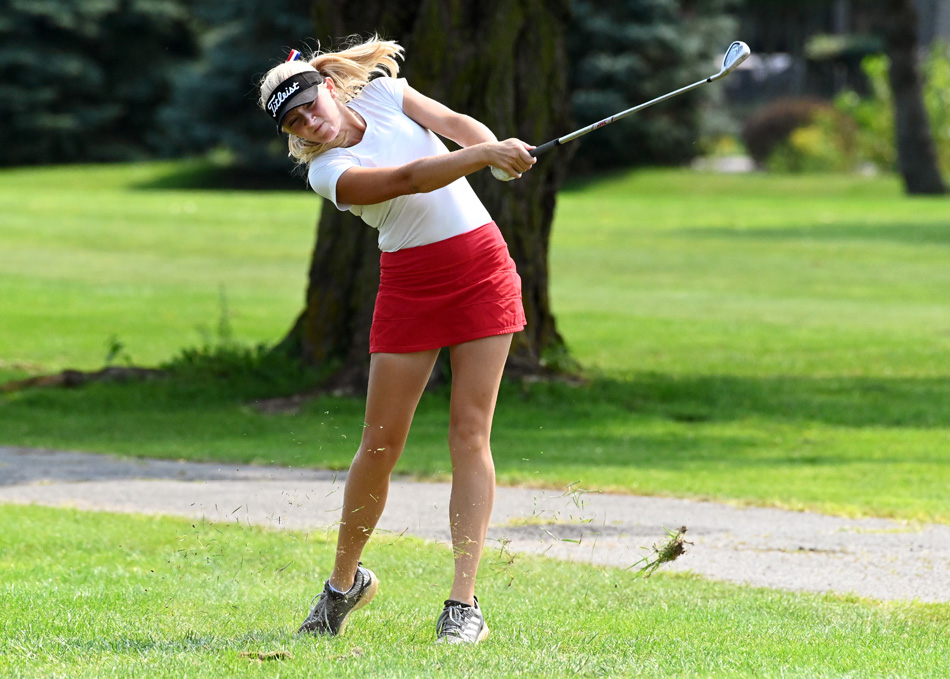 Nothing could be more true this weekend for the NorthWood girls golf team as it embarks on its fourth straight IHSAA Girls Golf State Finals. The realism of coach Adam Yoder knowing his club doesn’t have the full metal jacket of a roster to get into a scoring battle with the likes of Evansville North, Westfield, Homestead and Carmel. But the coach knows he has a few weapons to throw out, some of those psychological.

It’s not going to take rocket science to break down the weekend of golf at Prairie View Golf Club, host of the two-day finals that begin Friday morning. NorthWood’s team isn’t equipped to compete for the team title barring an other-worldly performance, Yoder the first to note that. But he does have two of the top individuals in the state in Cybil Stillson and Breanna Goss, both coming off All-State seasons as juniors and both playing like All-Staters this fall as seniors heading into their fourth straight state finals rounds.

Stillson is the ace to which a whole bunch of eyes will be following at Prairie View. Already a household name around northern Indiana, Stillson made noise around the state when her 62 at the East Noble Regional last weekend set the all-time scoring record for any round at any level of IHSAA high school girls golf. It was quite a show, and she was a few inches short on three shots of reaching the 50s. And Stillson claimed she had no idea it was going on.

“I definitely feel like I play better when I have higher expectations on me,” Stillson said. “I feel like if someone has an expectation for me, I should be able to meet it. I feel like I have higher expectations for myself and I should meet them. All of that should help me with my game. Coach Yoder did a good job of helping me to stay focused. We had a pretty long break heading to the back nine (at the regional) and my sister (Summer) and I just talked about the Ryder Cup the entire break, which helped me take away from the match. But once I was back on the tee, I was able to refocus and start back up again.”

Goss has quietly been on par with Stillson for much of the season. While Cybil was the tournament medalist at the Northern Lakes Conference, sectional and regional tournaments, Goss was just down the list on the NLC leaderboard, but right behind at the sectional and offering a solid two score at East Noble to help NorthWood to a runner-up team finish.

Riley Kitson quietly has shaved nine strokes off her 18-hole average from last year to this year to become a formidable three, and the combo of Kira Schrock and Bella Sechrist have full seasons of high-level golf under their belts.

“I look at it this way: we were 25 shots from first and 25 shots from fourth, so the truth about us is always in middle,” Yoder said. “I tend look at who we beat, rather than who beat us. Are we Homestead, Carmel, Westfield, Castle, Evansville North, HSE? No. But that’s OK, few are. We’ve proven to be one of the top 10-15 programs in the state each and every year for a decade now. I don’t see that ending any time soon, fortunately, either. When one realizes that IHSAA girls golf is a one-class system and we’ve been in the top five of that regional for nine straight years…for us to even be asked about that (the state’s elite group and how we stack up) each and every year is an amazing accomplishment in itself.”

Looking at the macro view of the tournament, No. 18 NorthWood will be paired with No. 2 Westfield and No. 7 Hamilton Southeastern. First tee for the fives will start at 8:48 a.m. on the first hole. One of the marquee groupings for day one are team championship contenders in No. 1 Evansville North, No. 3 Carmel and No. 6 Homestead. That group will feature some of the state’s elite in Faith Johnson and Chloe Johnson of Evansville North, Michaela Headlee and Ava Hedrick of Carmel, and Madison Dabagia and Simone Sink of Homestead.

Other area golfers competing in the state finals include teams from Penn and Culver Academy, and individuals Annastasia Hutchings of Plymouth, Karisa Dyer of Northridge and Selah Unwin of Mishawaka Marian.