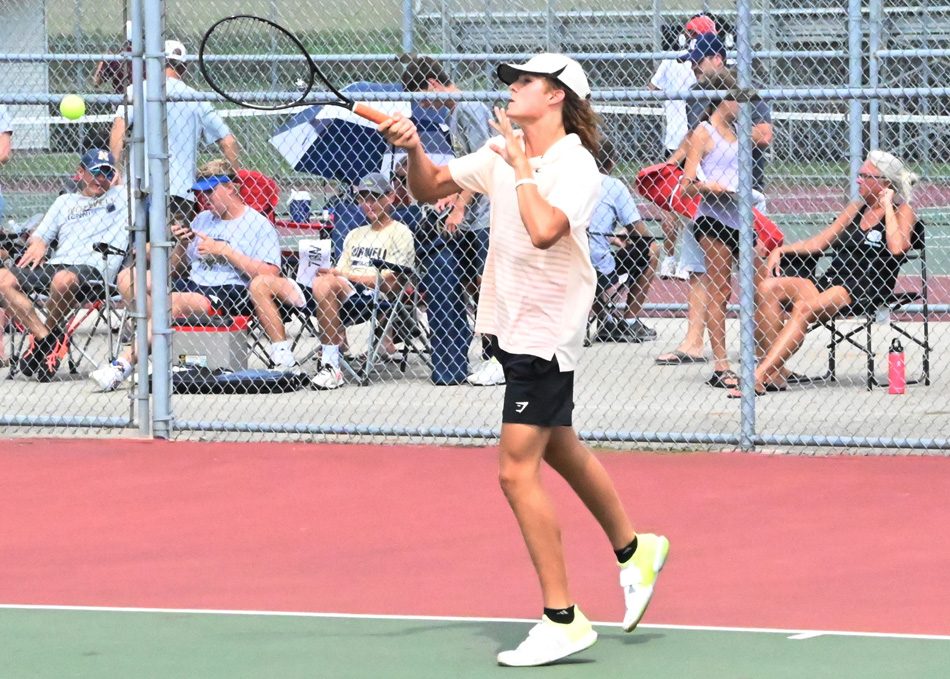 NorthWood’s Charles Anderson ended his career with a doubles win Wednesday despite a 3-2 loss to Fairfield. InkFreeNews file photo by Nick Goralczyk

The Panthers came up just short of advancing at its own sectional. The key court was No. 3 singles, where Fairfield’s Seth Yoder held off Karson Kirby 6-3, 7-6 (7-4) for the swing point. Brady Chupp and Chaz Yoder kept their season alive at No. 1 doubles, shutting out Brandon Kauffman and Noah Hochstetler via shutout to advance to the individual tournament. NorthWood’s Isaac Roberts and Charles Anderson also won for the Panthers, four and three, over Luke Holsopple and Michael Moore.

Garrett Stoltzfus and Cooper LeCount had singles wins for the Falcons, beating Nic Anderson and Wes Steiner in straight sets.

Goshen won all five courts in straight sets to advance to the final Thursday against the Falcons.

City rolled to a shutout win over the Vikings in the only game of the Warsaw tourney played at Columbia City.

The Chargers advance to face the host Knights on Thursday.

The Raiders and Lions advance to meet in the sectional championship Thursday in Dunlap.

The Academy is looking to win its 18th straight sectional title on its home soil Thursday when it will battle the Zebras.