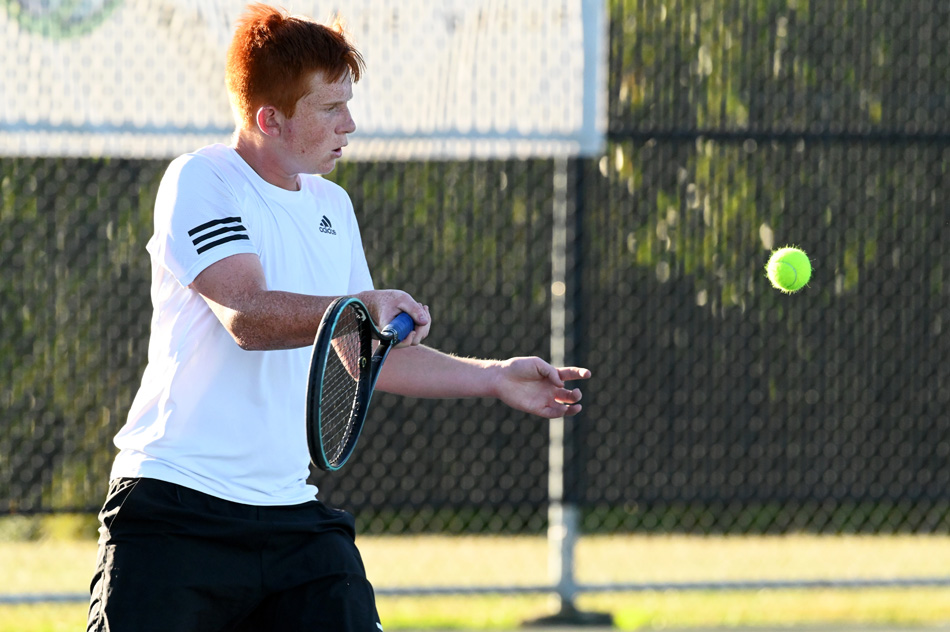 Keller Bailey and Warsaw will take on Wawasee in its first match of the Warsaw Boys Tennis Sectional. InkFreeNews file photo by Mike Deak

INDIANAPOLIS – The kings of the court will take on all comers this week as the IHSAA Boys Tennis State Tournament gets underway in just over a day.

Warsaw will host its traditional five-team sectional, but matches will be played at Columbia City. In the first matchup on Wednesday, Columbia City and Tippecanoe Valley will square off, the winner coming back Thursday to play Whitko. Warsaw got the bye, but so did Wawasee and the two will renew pleasantries on Thursday, the Warriors owning a 3-2 win over the Tigers during Northern Lakes Conference play two weeks ago.

A Warsaw championship win would afford the team to its 34th sectional title overall, theoretically tying it with No. 1-ranked Carmel, though the Greyhounds are favored to cruise to its 35th title. The Tigers are tied for 10th overall in most sectional titles won, matched by Center Grove and West Lafayette. Munster is the clubhouse leader with 47 total sectional titles, and 40 in a row.

Culver Academy is the host for the regional to which Warsaw flows, which would see the Peru champion. Bremen and Culver Academy sectional champions would meet in the other regional semi-final. Those matches start Oct. 5 and conclude on Oct. 6.

At NorthWood, the Panthers are part of a four-team grid that starts Wednesday and finishes Thursday. Semi-finals have NorthWood and Fairfield opposite Goshen and Bethany Christian. The RedHawks just finished off a perfect 7-0 run through the NLC, including a 5-0 win over NorthWood during the regular season.

The NorthWood champion will take on the DeKalb winner as part of the Concord Regional, the winners from Concord and East Noble meeting opposite.