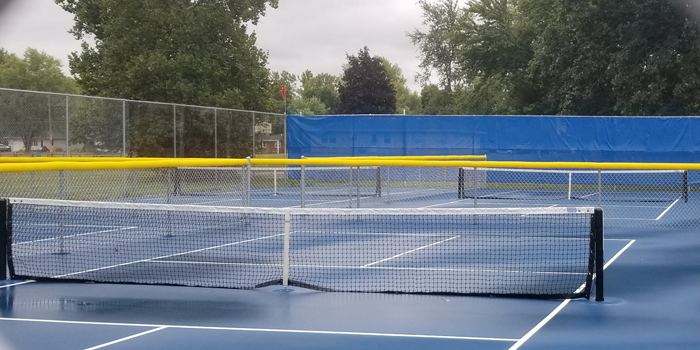 The courts at Kelly Park in Warsaw were quiet on a rainy Wednesday afternoon, Sept. 21. InkFreeNews photo by Dan Spalding

WARSAW — Local pickleball enthusiasts will likely be excited by an announcement made at the Warsaw Parks and Recreation Board meeting Tuesday, Sept. 21.

The parks department is being awarded a $53,000 grant that will be used for refurbishing the courts at Bixler Park to accommodate four pickleball courts and two tennis courts.

Warsaw Parks Superintendent Larry Plummer applied for the grant through the K21 Foundation. He received a letter Tuesday notifying him of the award.

For those not familiar with pickleball, the sport is described as a mix between tennis, racquetball and ping pong. Pickleball players use special paddles and a whiffle ball. Games are held on tennis courts with specific pickleball lines, and the nets and court sizes are smaller than those used for tennis.

When complete, it would become the second city park with permanent pickleball courts.

Plummer said the next step is to go before the Board of Works on Oct. 1 to accept the grant. On Oct. 7 Plummer will meet with representatives from K21.

Kayla Metzger, widow of Mike Metzger, attended Tuesday’s meeting to thank the board for allowing a plaque to be placed at Kelly Park in honor of her late husband.

Mike Metzger passed away in January and was known locally for his role in bringing the sport of pickleball to Warsaw. A memorial plaque dedication ceremony was held at Kelly Park in June.

The plaque, along with two trees planted by Metzger’s family, are at the entrance to Kelly Park’s pickleball courts.

Kayla Metzger also asked the parks board if the local pickleball club could stripe the basketball court at Kelly Park.

“We had 58 players last Thursday night. We did have our picnic, but there’s just not room. We’re outgrowing every place that we play at so we were wondering if we could stripe possibly the courts,” she said.

Kayla Metzger told board members she has a striper and that the pickleball club would do the striping work.

Park Board President Steve Haines said he thought the subject had been discussed before.

In August 2020, Butch Schapson, Warsaw, representing Pickleball Phanatics, asked the board to allow temporary pickleball tape lines to be placed on the tennis courts at Kelly Park.

Haines said he recalled there were concerns with that as far as damage to the courts and confusion for people playing tennis.

Kayla Metzger said she was aware that was the concern regarding the tennis courts.

“Honestly I’ve seen two people play tennis since I’ve been back in April,” she said. “Not that I want to take away the tennis courts whatsoever. We were just wondering.”

Kayla Metzger also informed board members that an anonymous donor would like to put sidewalks down on the west side of the pickleball courts at Kelly Park once the stormwater project work has been completed in that area.

“I told this person that I knew probably within next year you’re going to have to be digging up something and the offer still stands, whenever it would work. We could tie it in with the other sidewalks so that no one has to step in the dirt and carry that onto the courts,” she said.

She then asked if there would be pickleball courts in Winona Lake in the next year or two.

Plummer said it was his understanding that Winona Lake pursued a grant but was not awarded the grant; however, he believes they intend to have pickleball courts there in the next year or two.

“What’ll happen is, if we do Bixler Park, once it’s open – we’ll split, is what will happen, which is sad, but there’s just no place that we can have …  we need about six to eight courts,” Kayla Metzger said.

Plummer explained that the goal of the parks department is to offer facilities at different locations so that everyone has a chance to experience the parks offerings as opposed to something like an athletic complex where there are multiple courts in one location that can serve hundreds of people. He added that this is K21 Foundation’s vision as well.

“In talking to Rich (K21 president and CEO Rich Haddad), they’d like to see the courts spread out so everybody has a chance to experience something at the park and not have to go to a certain place to do that,” Plummer said. “That’s why we do neighborhood parks, so that everybody has an opportunity to play at a park and enjoy the parks so that’s kind of the mission of the park department.”

Plummer also told board members he was contacted recently by Marsha Schmitz, a member of the Warner family in Warsaw.

The Warners had reunions at Beyer Park for many years, Plummer said, and were interested in doing something for the park.

The cost was around $2,670 and the benches have been ordered.