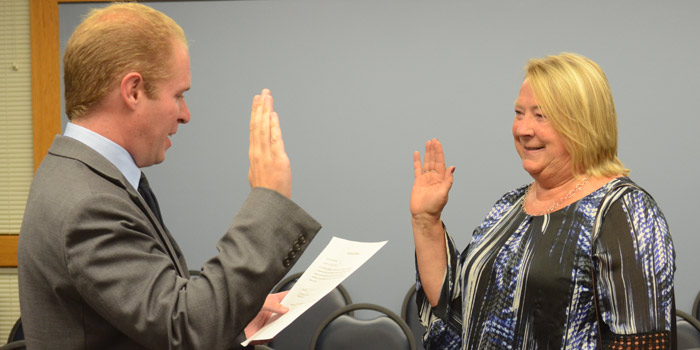 SYRACUSE — Cindy Kaiser, who spent 39 years in the education sector, will now be a part of town government. Kaiser was elected during a Republican town caucus Monday evening, Sept. 20, by three Syracuse town precinct committeemen and one town vice precinct committeeman. She will serve the remaining term of Tom Hoover on the Syracuse Town Council.

Hoover submitted his resignation as councilman for Ward 3 of the town effective Sept. 30. Hoover resigned from the council since he moved into a new home outside the town limits.

Even though Kaiser was officially sworn in following the caucus, she will officially take office on Oct. 1. 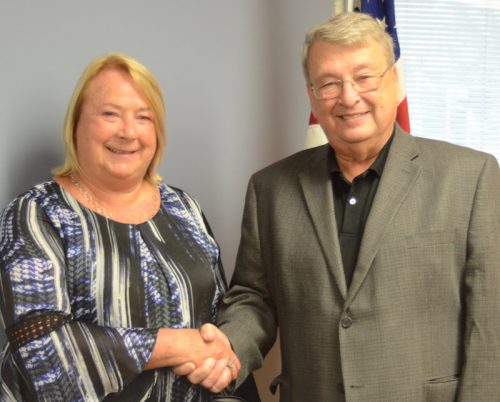 Cindy Kaiser is officially congratulated on her election to the Syracuse Town Council by Kosciusko Republican Chairman Mike Ragan.

Kaiser, who resides on Medusa Street, briefly spoke to James Layne, Virginia Cazier and Karen Grady, precinct committeemen, and Cindy Taylor, precinct vice chairman who filled in by proxy for Kim Cates. Kaiser noted she had a lot of different opportunities and challenges as an administrator that “obviously have given me a lot of skills that I think I can bring to the board to help make decisions for the town of Syracuse.”

She noted she has communicated with a variety of individuals in a variety of situations. She has worked on school budgets and managed extra curricular accounts. She was also involved in making decisions during building projects and renovations. Kaiser also has experience in writing grants.

She stated Milford School had and hopefully still has a very family oriented atmosphere with a friendly environment. “That doesn’t happen overnight. It takes a lot of work. It takes a lot of insight, a lot of tough decisions, tough conversations,” said Kaiser, including hiring the right people for the right places, working together as a team and figuring out the strengths of different people and putting people in the right places. “I want to take those types of situations and bring them here to the town of Syracuse and make Syracuse one of the best towns around. I would like to be a part of that.”

Kaiser and her husband Brent have resided in Syracuse since 1985. Their children, who were raised in Syracuse and left the area for college, have returned to the area to raise their own families. Kaiser is also a member of the Syracuse Lake Association board of directors.

Even though Kaiser was the only candidate, the caucus process was still followed.

Larry Martindale, council member, was the sole council member present, and was the first to congratulate Kaiser. He speculated that she will also be serving on the Turkey Creek Fire Territory Board with him.

Kaiser, the lone woman on the council, will be present at Tuesday evening’s meeting.