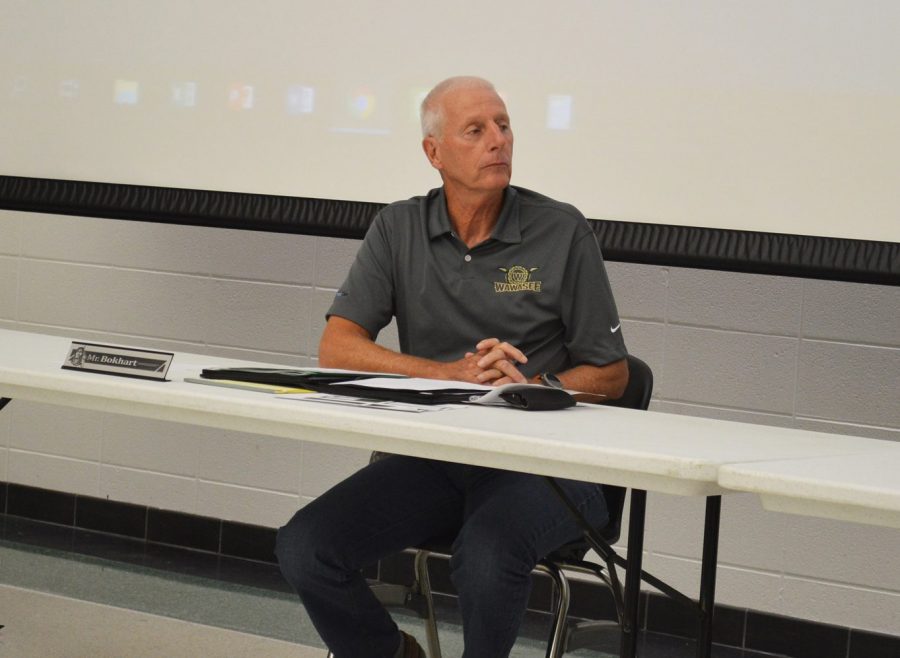 Wawasee School Board President Don Bokhart listens to a report during Tuesday’s meeting.

SYRACUSE — Mask wearing has been a contentious issue especially recently with some local school boards, including Warsaw, grappling with it. Although the Wawasee School Board did not take any vote to change current policies, several community members shared their opinions with the board during the regular monthly meeting of the school board Tuesday evening, Sept. 14, in the Wawasee High School cafeteria.

Board meetings are typically held in the Warrior Room of the high school, but this month’s meeting was moved to the cafeteria in anticipation of several community members attending.

Superintendent Dr. Steve Troyer’s COVID-19 report was moved to near the top of the agenda prior to the patron comments so the most current information could be presented prior to any public comments. Troyer emphasized “our team, we care deeply about students,” and he noted “we are not politicians and we are not medical experts, whether that be in medicine or health care.”

He said the primary objective is to keep students safe and in school because it is believed in-person learning is the better option.

Troyer noted Gov. Eric Holcomb’s mask mandate for schools expired in July and authority was then given to local school boards to make decisions about mask wearing. The most recent executive order issued by Holcomb still allows for local decisions to be made, but any decisions made must be more restrictive and not less restrictive.

“We are required to follow local public health orders,” Troyer said. He noted close contacts with a COVID infected person require tracing. But if every student is masked, quarantining is not required if no symptoms are present and fully vaccinated individuals do not have to quarantine.

The Kosciusko County Health Department has not issued a mask mandate for schools, though the county health officer has recommended mask wearing in schools because the recent COVID burden is placing a strain on local health care.

Troyer added “we will not get into whether you should or should not get vaccinated.” He also stressed parents should not send a sick child to school because it compounds the quarantine problem, and quarantining is required and “we don’t have any other option.”

Several patrons spoke about mask wearing and all of them were not in support of masks. Becky Tusing said “where is the science?” and there have been no peer group studies showing the effectiveness of mask wearing. “It really depends on who you are listening to” and she noted quarantining for healthy people had never been implemented in the United States before COVID.

“It (mask wearing) is a decision that needs to be made by parents,” she said, “and we are here to let you know where we stand as parents and the majority of us don’t want our children to be masked.” Mask wearing can hurt a child’s identity and actually cause health issues such as breathing in carbon monoxide and their own germs.

Randy Woodcock said he is data driven and noted there have been more deaths caused by the flu among children “so why didn’t we mask for the flu?” Another parent said her child has hearing loss and can’t read the lips of his teacher when the teacher is wearing a mask.

Others said the data needs to be thoroughly researched and for people to not just believe what the United States government says. One parent talked about her daughter, a high school student, crying herself to sleep at night because she could not make friends and mask wearing caused an acne problem to get worse.

In other business, the board heard from Dave Baumgartner, a 1971 Wawasee High School graduate, who asked the board to consider renaming Warrior Field, the high school football field, Harry J. Michael Field in honor of Harry Michael, a Medal of Honor recipient during World War II who grew up on a farm near Milford. Michael was one of only 42 Medal of Honor recipients from Indiana.

Michael graduated from Milford High School in 1940 and went on to Purdue University. He was killed during the war while hunting for German snipers just one day after turning 23 years old.

Michael’s nephew, Richard Rhodes, also spoke and shared many facts and details about his uncle’s life including Michael helping his unit break through the formidable Siegfried Line of the Germans.

No action was taken by the board Tuesday but the request will be considered.

Also during Tuesday’s meeting the school board heard a report from Troyer and his assistant, Dr. Shelly Wilfong, about professional learning communities. Wawasee began implementing PLCs a couple of years ago before COVID and brought in a guest speaker to help start the process, but implementation was considerably slowed due to the pandemic.

Troyer said PLCs will be a shift in the way teaching is done because of teachers working together and the focus being on learning, not teaching. “It doesn’t really matter if you were taught something if you didn’t learn it,” he said.

PLCs “are a framework that guides the work we as educators do,” he said. PLCs also place an emphasis on assessing student learning to see how effective the teaching has been and then focusing on what needs to be done when the results are not satisfactory. Teaching state standards is also streamlined because only the essential ones are taught.

Wednesday morning Smart Starts have been used to talk about PLCs and a professional learning day for teachers is scheduled for Sept. 29 where PLCs will be talked about even more.

• Cindy Brady, student services coordinator for Syracuse Elementary School, is one of 12 cadets for the Kosciusko Leadership Academy of 2021-22.

• Several overnight or out-of-state trips were approved by the board.