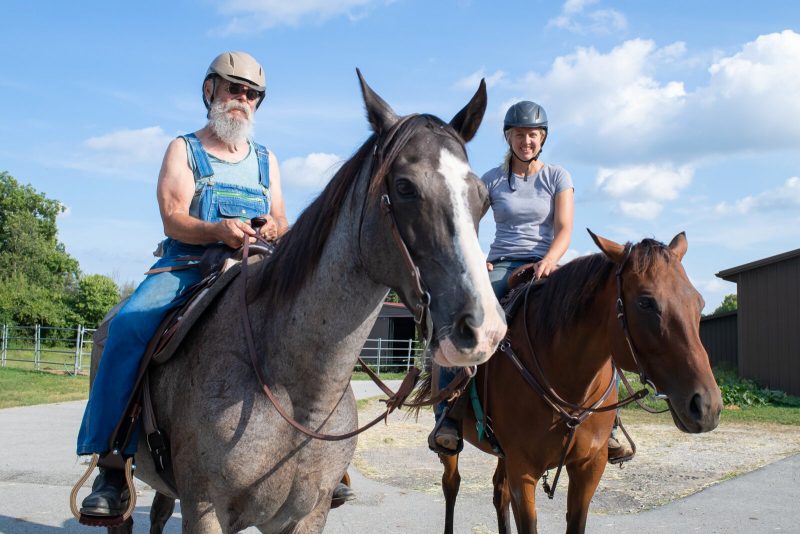 FORT WAYNE – There’s something magical about horses, especially for military veterans battling PTSD or other disabilities.

“Horses are prey animals,” says Allison Wheaton, executive director of Summit Equestrian Center. “So when they view the world, they have a totally different perspective than we do, as predators. Their safety and their health is reliant on the fact that they have safe relationships in their herd, and that they’re aware of all the different potential dangers, who’s in charge, and the leadership echelon of things.”

These are life skills that combat veterans can relate to—and learn from. Wheaton is hoping to spread this message Oct. 9, during an event called Trail to Zero, a 20-mile horse ride from the East side of Fort Wayne to the Veterans Memorial Shrine and Museum at 2122 O’Day Rd.

Trail to Zero is a national program started in 2017 by Meggan Hill-McQuenney, COO of BraveHearts Equine Therapy in Poplar Grove, IL. The events comprise of military combat veterans riding horses through 20 miles of trails in major American cities, from New York City to Washington D.C., to Houston, TX.

“BraveHearts rides will bring the overwhelming statistic of 20 veterans committing suicide per day to the forefront of Americans’ minds while also helping to educate veterans and Americans about equine-assisted services and the benefits that it has as an alternative approach to healing,” the website says.

“In Allen County, we have a very significant horse population,” Beck says. “This is about quality of place and economic impact, and it drives up property values.”

As Beck was researching a horse trails project, he encountered BraveHearts and its Trail to Zero while perusing an equine magazine.

“The mission, I immediately fell in love with,” Beck says. “This group’s whole mission is to bring awareness to people about the fact that 20 veterans a day are committing suicide and also to raise money to fund these equine therapeutic riding programs across the country.”

Trail to Zero events usually take place in big cities, and when Beck first contacted Hill-McQueeney, she declined, citing lack of critical mass in Fort Wayne. But after the Veterans Memorial Shrine and Museum unveiled its replica of the Vietnam Wall, Beck tried again. This time, Hill-McQueeney agreed, and the process began to make it happen.

“By the end of the first meeting, we had determined that we had a lot of common interests and were like-minded in our mission and really enjoyed working with the handful of veterans and horsemen who were from the Fort Wayne area,” says Hill-McQueeney. “We really thought it would be a perfect fit. The last year has been extremely positive and proactive. It’s been an honor to work with all of the people who serve on our committee.”

With the help of the Allen County Geographic Information Systems (GIS) Department, Beck was able to design a 20-mile trail for the riders. He also worked out other logistics, like security, escorts for the procession, and permits.

The trail will start at Emmanuel Lutheran Church on Wayne Trace and Emmanuel roads. From there, riders will take Tillman Road and go across Calhoun Street to Indiana Tech’s Warrior Park, which will be the group’s first bio-break stop. Then they’ll head up Calhoun Street to Parkview Field and have lunch at Silver Parking Lot. Mission BBQ has agreed to provide the lunches, and booths from various community organizations will be set up.

“We have more than 20,000 veterans in Allen County alone,” Beck says. “And the hope is to have everyone come out somewhere along the 20-mile trail and observe what’s going on.”

After meandering downtown after lunch for a bit, the riders head back out toward Main Street, go to Lindenwood Nature Preserve, and up to the University of St. Francis. Finally, they’ll take Spring Street to Bass Road and end at the Veterans Shrine.

Beck and Wheaton hope this historic ride will be the first of many annual events of this type in Fort Wayne. Wheaton would like to see local equestrian culture continue to expand, particularly as residents seek mental health care during the ongoing COVID-19 pandemic. Growing up, she often found peace and solace by going to her neighbor’s horse barn, riding horses and cleaning stalls.

“That kind of became my refuge, growing up,” she says. “I was able to have a safe place to go and safe relationships to kind of figure out the communication stuff and all the body language stuff on my own. And it just, it gave me some really wonderful friendships growing up and a really good sense of self.”