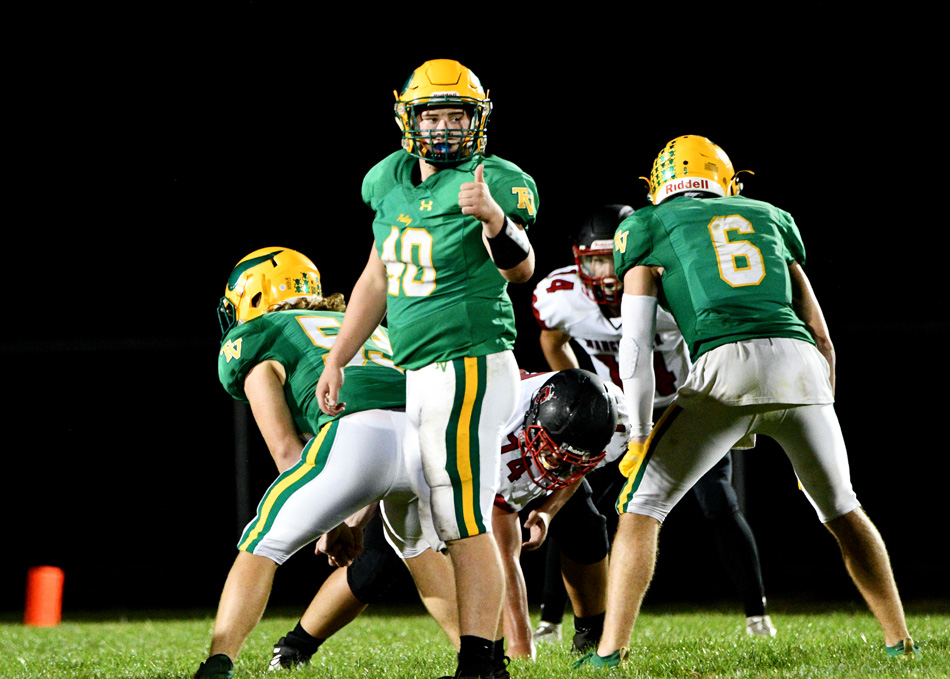 AKRON – The Tippecanoe Valley Vikings squared off with the Manchester Squires on Friday night and came away victorious with a 36-0 win.

Coming into the matchup, the Vikings had not been challenged through the first three weeks of the season. Tippecanoe Valley had trounced each previous opponent with the closest finish coming in a 44-13 victory over Northfield.

Manchester took possession of the ball to begin the game and methodically began to march down the field. The Squires ground six minutes off of the clock before finding themselves facing a fourth and 11. Rather than kicking a field goal, Manchester elected to go for it deep in Tippecanoe Valley territory. The Vikings got pressure on the quarterback, forcing a rushed and inaccurate throw.

The Vikings would quickly find themselves facing a fourth-down conversion of their own. Staring at a fourth and one, Tippecanoe Valley quarterback Branson McBrier surged through the line of scrimmage for a gain of seven and the first Viking first down of the night. A late hit penalty a few moments later put the Vikings on the Manchester 37-yard line. Dropping back, McBrier took advantage of excellent protection to find Rex Kirchenstien for a touchdown. A failed two-point conversion would keep the score at 6-0 in favor of the Vikings.

The two opponents would trade empty possessions before Manchester began to drive down the field once more. As the Squires began to look more comfortable, sophomore Wade Jones stepped in front of a Manchester pass and was off to the races for a 56-yard pick-six. The play marked the fourth interception in as many games this year for Jones.

Another failed two-point conversion and the Vikings held a 12-0 lead.

After another failed drive for Manchester the ended in a turnover, Tippecanoe Valley wasted no time in extending the lead. McBrier would find Braden Shepherd on a screen play and Shepherd galloped 63 yards for a score. The first successful two-point conversion of the night would move the margin to 20-0.

Manchester would have their best drive of the first half on their final meaningful possession before halftime. The Squires marched down to the Viking 10-yard line to set up a first and goal. They would not go much further. On third and goal, the Vikings recovered a Manchester fumble to keep the Squires off the board and demoralize the Manchester offense.

The Vikings stayed aggressive, driving down the field in an effort to score. With under a minute to go in the half, McBrier hit Jones in stride for a touchdown pass. The excitement was short-lived however as a holding penalty would erase the score and back up Tippecanoe Valley. The drive would stall and after a 40-yard punt from Jones, Manchester would run out the clock to reach halftime.

Coming out of halftime, Tippecanoe Valley got the first crack at putting a drive together. A thirty-yard kick return from Shepherd looked promising but the drive ultimately ended in a punt. Not much would change, however, as Manchester continued to be stifled.

The Vikings would add two more scores, both coming from the legs of senior Jamasyn Virgil. With the added two-point conversions, Tippecanoe Valley would take a 36-0 lead with just under 11 minutes remaining in the game. This triggered to clock to beginning running continuously while depth players began making their way onto the field for the Vikings sporadically.

To the credit of the Squires, Manchester never gave up throughout the game. The visiting team made an all-out push to get some points on the board right down to the final whistle.

McBrier finished his night 7-9 for 180 yards and the two touchdowns, 73 of those going to Shepherd and 61 to Kirchenstien. Virgil was one of seven Vikings to reach double figures in rushing yards, leading the team with 30 yards on the ground.

Looking ahead, Tippecanoe Valley (4-0, 3-0 TRC) will travel down the road next Friday night to take on a bitter rival in the Rochester Zebras. Rochester will enter play riding a three-game winning streak, including a 44-19 beatdown of Wabash Friday night.