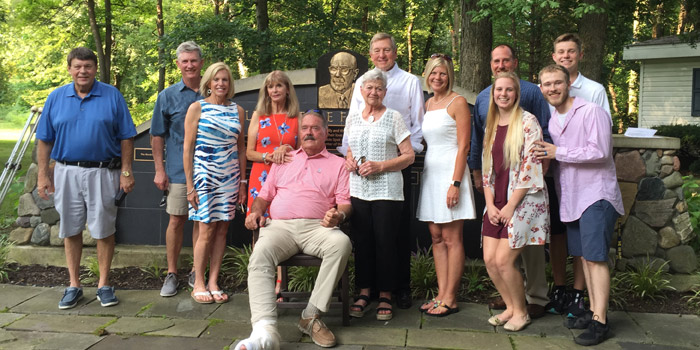 The founders are recognized with this honor for significant contributions of $100,000 or more made during the course of their lifetimes. They receive a medallion and a plaque with their name is added to the Eli Lilly Lifetime Founders Society wall located at the WACF Levinson-LaBrosse Lakes and Wetland Education Center, Syracuse.

New founders were recognized during a celebratory dinner Aug. 27.

The Tillmans were longtime residents of Lake Wawasee with a remarkable passion for sailing. They were both award-winning sailors with a love of water that led them to give back through their time and talents. They directly supported the WACF Memory Garden among many other watershed endeavors.

Dick Tillman was born in Elkhart and graduated from the U.S. Naval Academy transferring to the U.S. Air Force. Linda Tillman was born in Mishawaka. They were stationed at numerous locations in the United States and Europe while raising three daughters Laurie, Libbie and Susan.

They both attained national recognition for their sailing success and activity. Both received numerous championship awards in sailing.

Busse has been an ardent supporter of WACF for many years. A longtime resident of the south shore of Lake Wawasee, Busse has distinguished himself in business and philanthropy. His abilities and innovation were on full display as he developed a game-changing approach to manufacturing steel. Through his leadership Nucor Steel established an entirely new process for steel production. Busse and two associates started Steel Dynamics, one of the largest producers of steel in the world.

He helped establish the Northeast Indiana Conservation Banquet to support the Indiana Natural Resources Foundation which has raised hundreds of thousands of dollars for INRF.

The Bairds have been exceptional volunteers for WACF for many years. Donn Baird has been treasurer of WACF since 2008 and joined the board in 2009 serving nine years, rotating off the board in 2019, only to return in 2019 is currently serving his fourth three-year term as treasurer on the board of directors and Linda Baird has been quick to step up and support WACF efforts with her talents. They recently received the WACF Cattail Award.

Linda Baird’s grandfather built a home at Lake Wawasee and she has been coming to the lake her entire life, as well as the Baird children and grandchildren.

Former Indiana University football star Bill Couch and his wife Babs have lived at Lake Wawasee since 1978. Bill Couch is an Air Force veteran and graduate of Indiana University and Indiana Medical School. He joined Orthopedics Northeast and was a partner doing hip and knee replacements before his retirement. He served on the WACF board from 2014-2017 and was helpful in land management.

Ambassador Randall L. Tobias, who grew up in Remington, graduated from Indiana University and was an artillery officer in the U.S. Army. He was appointed chairman and CEO of AT&T Communication and AT&T International from 1991-1993. In 1993, he joined Eli Lilly and Company as chairman, president and CEO. He was named chairman emeritus upon his retirement in 1999.

In 2003, President George W. Bush nominated him to serve as the first United States Global AIDS Coordinator, during which he was responsible for launching the highly successful President’s Emergency Plan for AIDS Relief and for directing all U.S. government international HIV/AIDS assistance across the globe. In 2004, Ambassador Tobias endowed the Randall L. Tobias Center for Leadership Excellence at Indiana University to promote the study and practice of leadership and extend the impact of talented leaders throughout the world through the Tobias Fellows Program.

Tobias has been recognized for his leadership in business, education, philanthropy and government service. His distinguished career and commitment to others has left a positive legacy around the world. As a Lake Wawasee resident, Tobias has also come alongside WACF to support initiatives that will preserve the lakes far into the future.

“Welcome to our new founders,” shared Heather Harwood, executive director. “As an Eli Lilly Lifetime Founders Society member, you are now a key part of our organization’s distinguished story. Your leadership drives our mission of protecting and preserving our watershed for generations to come and we are grateful for your remarkable support.”