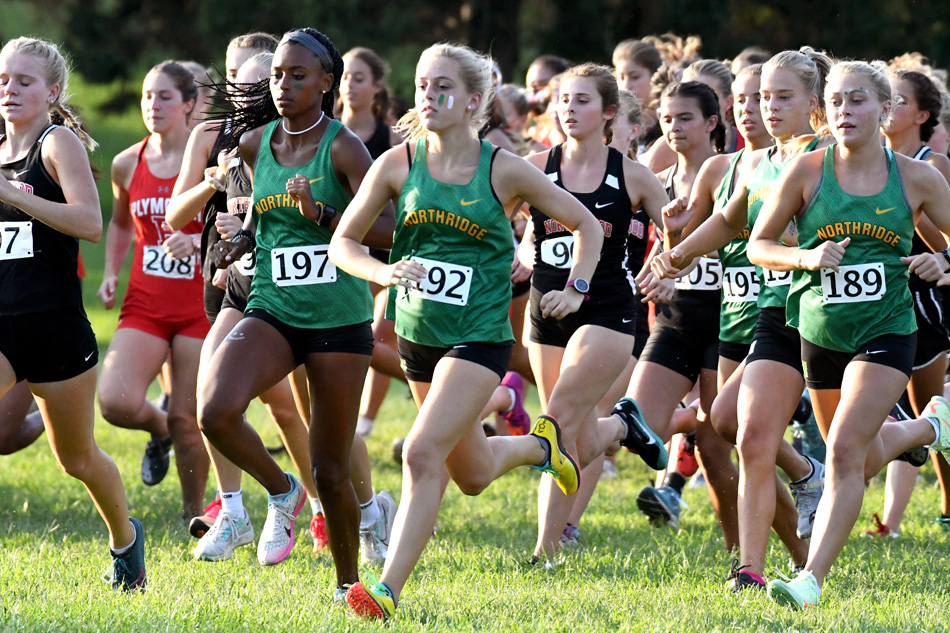 The girls take off to start Day 1 of the NLC cross country round robin Tuesday at Ox Bow Park. InkFreeNews photos by Mike Deak

GOSHEN – More than a few coaches and fans felt the 2021 cross country season could be a fun one in the Northern Lakes Conference. Day one of the round robin didn’t disappoint.

Goshen’s boys team and Northridge’s girls team both came out of Tuesday’s Day 1 of the season round robin with 7-0 marks, but were severely pushed to get there.

Goshen, bringing back a bulk of its star-studded roster from last fall’s state team, would edge Northridge 28-29 at the top and best both Warsaw 21-38 and NorthWood 20-38, respectively, to take the full tally in the two-day regular season conference mega duals. It was Northridge that many felt if someone would catch Goshen, it would be the Raiders. That was certainly the case.

Drew Hogan was the top overall runner, leading Goshen with a 15:59 but needed every step as Northridge’s Jack Moore was only four seconds back. Cole Johnston and Tommy Claxton were third and fifth overall for the RedHawks, beating Ridge’s Jaxon Miller and Trevin Schlabach to the line. 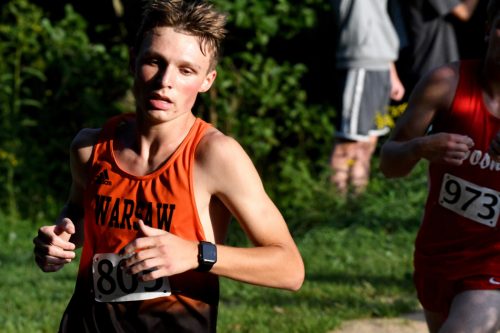 Warsaw’s Tyler Swartz makes the turn at the 1K mark of the Ox Bow course.

Warsaw had Garrett Hall, Luke Nier and Harrison Phipps lead the squad with a pack run, Hall the first of the three in at 17:21 and 12th overall. Ryun Hoffert and Tyler Swartz gave Warsaw its top five.

NorthWood was lurking, putting three of its five in the top 18, led by Brady Hunsberger and Jordan Burden coming across together at 17:23 for 14th and 15th overall. Owen Allen, Grady Stevenson and Cole Davies were all point scorers for the Panthers.

Mishawaka, Concord, Plymouth and Wawasee made up the back four teams.

Wawasee had Camden Powell fight through some illness to run an 18:07 to lead the team. Cade Beer, Summit Shaw, Senate Shaw and Harry Doss all scored points for the Warriors.

The girls standings have been and likely will continue to be a two-team race once again, with Ridge getting the edge in round one with a 25-31 advantage on Warsaw. NorthWood was 23 points back of Warsaw and 27 behind Northridge to represent third place and a 5-2 mark after bettering the remainder of the conference.

Mishawaka, Goshen, Wawasee, Concord and Plymouth made up the rest of the standings after Day 1.

Battling each other to the finish were Ridge’s Tame Baylis and Haylee Hile, Baylis getting a quarter step on Hile at the finish line in a determined charged down the chute at 19:44. Warsaw’s Joey Rastrelli ran unopposed in third at 19:57 while NorthWood’s Kaitlin Burden started the next wave of runners at 20:15 for fourth place.

Clare Ritchie and Emma Long were sixth and seventh to aid the Raiders while Wini Barnett was fifth, Ava Knight eighth and Mikayla Mimnaugh ninth for the Tigers.

NorthWood had Sydney Prenkert in 20th, followed by Emilie Allen and Bridgette Stutsman.

Wawasee, sitting sixth, had Trinity LaJoice run a personal best at 22:49 to lead the team. Jasmine Hernandez, Mariah Hurst and Lily Tyler were next in line for the Warriors, all coming home in succession within a second of each other.

Day 2 of the NLC cross country season is Sept. 14 at Warsaw, which will determine the regular season champs. Those standings then hold for the postseason meet back at Ox Bow on Oct. 2.