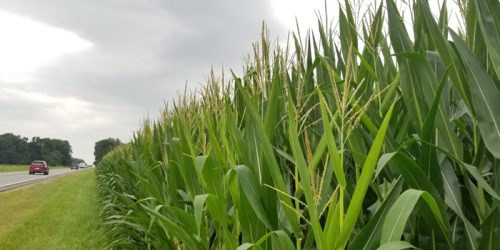 A crop of corn is seen north of Leesburg along SR 15 in early August. InkFreeNews photo by Dan Spalding.

WEST LAFAYETTE – A new report from the U.S. Department of Agriculture shows Indiana farmers are on pace to harvest record corn and soybean yields this fall.

The USDA’s National Agricultural Statistics Service is forecasting Hoosier farmers will harvest on average 194 bushels of corn per acre, an increase of 3.7 bushels over last year. If realized, Indiana will produce just over 1 billion bushels of corn, the fifth-highest of any state.

For comparison, USDA is expecting Illinois farmers to see an average corn yield of 214 bushels per acre, producing 2.3 billion bushels of corn.

Nationally, USDA is projecting 174.6 bushels per acre, resulting in 14.8 billion bushels of corn.

In terms of soybeans, Indiana could be the third-highest soybean growing state this year. USDA is projecting a statewide record yield of 60 bushels an acre with production of 341 million bushels statewide. Illinois is expected to top the list with 681 million bushels based on a statewide average yield of 64 bushels per acre. But Indiana farmers are still a long way off from harvest.

“In terms of the soybeans, this season has been anything but normal. We’ve had wet and drought conditions, affecting the root systems and causing disease. The next 35 days are critical for yield development,” said Purdue Associate Professor of Agronomy Shaun Casteel in a news release.

Nationally, the ag department is forecasting 4.3 billion bushels of soybeans, up 5% from 2020.

The crop production estimates are based on crop conditions as of August 1. According to USDA’s weekly crop progress report, 74% of corn and 70% of soybeans in Indiana are considered good to excellent.

USDA is also forecasting a record yield for Indiana’s winter wheat crop, which measures about 300,000 acres. The agency puts the statewide average yield at 82 bushels an acre, generating 24.6 million bushels of wheat.

Indiana is one of five states expecting record crops in both corn and soybeans. The other states are Illinois, Ohio, Pennsylvania and New York.