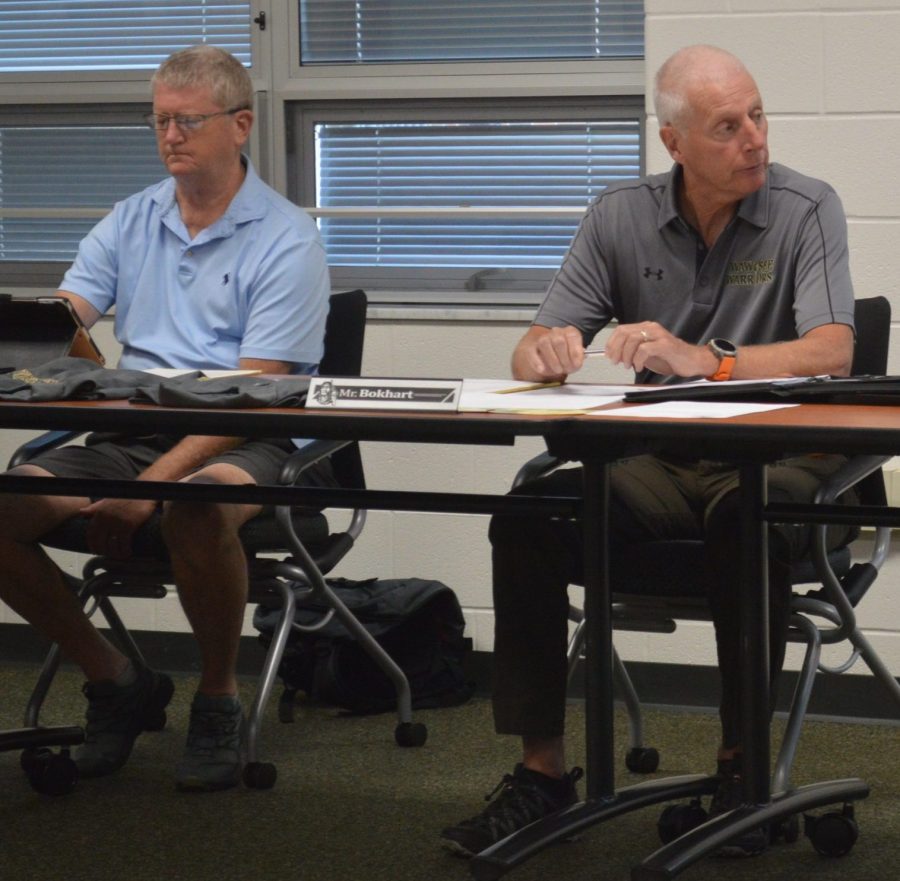 Mike Wilson, left, and Don Bokhart of the Wawasee School Board.

SYRACUSE — ILEARN, the state assessment replacing ISTEP+ for all but high school students, was administered for only the second time this past school year.

During the regular monthly meeting of the Wawasee School Board Tuesday evening, Aug. 10, in Syracuse, the board heard a brief report about Wawasee’s ILEARN results from Dr. Shelly Wilfong, assistant superintendent.

She cautioned results from 2021 should not be compared to 2019 results because a new baseline was used for 2021. Wawasee was above the state average in English and language arts, as well as math, for grades three and four district-wide, but was below the state average in other grades.

Wilfong, as she did in July when giving a report about other testing data, emphasized the COVID pandemic has caused significant learning losses for students who are learning English and don’t have as much internet access, but some other students are actually doing better on testing.

Comparing testing data is more difficult with ILEARN she noted because depending on which portion of the testing, students are not all given the same questions. But she noted the focus moving forward will be on digging deeper into the data to find out what it is really saying and using a more tailored student learning approach and “one size does not fit all.”

In other business, Don Bokhart, school board president, announced longtime board member Mary Lou Dixon will be retiring from the board effective by the end of October. A retired teacher, she has served on the board longer than any current member at 19 years.

She holds the Turkey Creek Township seat on the board and her replacement will be required to live in Turkey Creek Township. Dr. Steve Troyer, superintendent, said more details and how to file as a candidate to replace Dixon will be posted on the school corporation’s website, www.wawasee.k12.in.us, by Sept. 1.

Dixon only briefly commented on why she is retiring, saying she has physical limitations — “I don’t walk very well anymore.”

Also during Tuesday’s meeting, Troyer gave a brief breakdown on how ESSER III, part of the American Rescue Plan, budget funds are being used. He said the third phase is “more targeted toward instruction” and at least 20% percent of funds must be used to address learning loss.

Funds can be spent until September 2024 for this phase and have been used for technology and infrastructure updates, new electronic devices for teachers, an online content provider, salaries and benefits for several positions including virtual learning coordinators and several others, extended summer school and covering staff absences for COVID quarantines.

During his report to the board, Troyer noted there has been an uptick in COVID cases recently due to the variants becoming more prevalent. But he noted the CDC and state department of health are still only recommending masks be worn by students while in school.

“We feel very strongly these decisions should be left up to families while we can still decide what to do,” and there are no government mandates, he said. However, the U.S. Department of Transportation is mandating masks be worn on all forms of public transportation, so students will be required to wear masks while on school buses.

He said bus drivers have been notifying families of this requirement.

Troyer said in his 17 years of public education, “I have never seen a more hotly contested topic than this (wearing of masks and more recently the COVID vaccines).”

• The annual Warrior Open golf outing July 8 that raised funds for the Wawasee Athletic Department had 43 teams participate, significantly more than the 29 or so teams the past five or six years.

• The board approved dedicating a public right of way of about one-half acre to the Town of Syracuse along CR 1300N at the intersection with Syracuse-Webster Road. The town will be expanding the road as part of the Polywood project.

• An updated school corporation vision statement was approved by the board: “Our students are confident, well-rounded citizens who positively impact their communities.”

• The board approved establishing a Wawasee Early Learning Center at Polywood in Syracuse, which will begin the Tuesday after Labor Day.