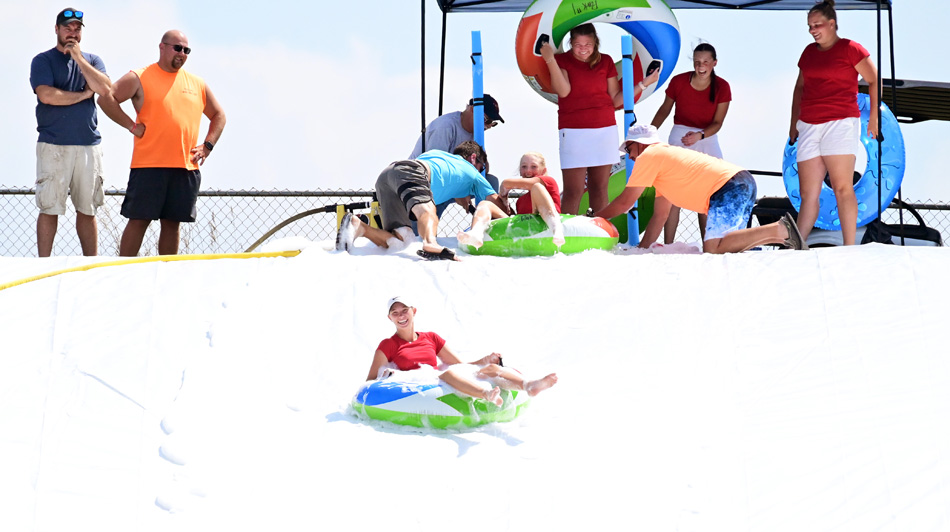 NAPPANEE – There is no question the NorthWood girls golf team is having fun early into the 2021 season.

Covered in soap and smiles Thursday afternoon, the Panthers celebrated a team title making good on a deal it was given earlier in the day.

NorthWood golf was offered a deal by its new athletic director, Roman Smith, that if it won the team title at its own NorthWood Girls Golf Invite, it could take the plunge down the water slide constructed on the hill to the south of the McCormick Creek Golf Course. The hosts took care of that, shooting a 332 to lead the field, bettering its chief competitor, Penn, by four strokes. Attached to the deal was NorthWood had to have the medalist as well, and Cybil Stillson said ‘Hold my Gatorade’ by shooting a 71 to claim that honor and finish off the deal. 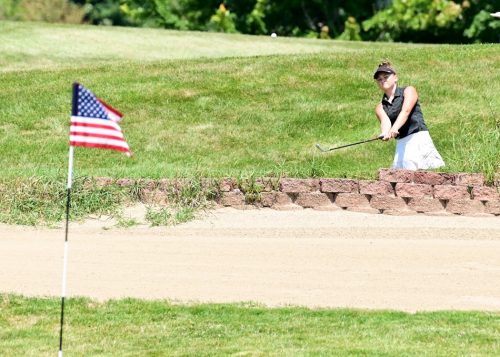 Warsaw’s Abigail Davis chips onto the 18th during play at the NorthWood Girls Golf Invite.

“The kids get along really well together,” said NorthWood head coach Adam Yoder. “I think there was a feeling that we weren’t going to maybe be as good as we were in previous years, and that may still play to fruition. I think they kind of like not having that target on their back as much as maybe we’ve had in the past. That is relaxing, that is freeing. It allows Bre and Cybil to just go out and play and do well. The other three can come along.”

Stillson started with a triple bogey on her first hole, but rallied to sit even after four and played one under the remainder of her round. Stillson outplayed Penn’s ace, Delaney Wade, who shot a 73 to keep pace with the NorthWood No. 1.

Breanna Goss followed Stillson with an 83 for fifth overall in the tournament and Riley Kitson was eighth at 87 for the top three for the Panthers. NorthWood got a much needed 91 from Bella Sechrist in the five hole, which put the Panthers over the Kingsmen for the team title.

“For her to do that, that was so cool,” said Yoder of Sechrist. “I have to give our assistant Payton (Grubbs) credit. He kind of took the back end of the lineup and I took the front end and we switched it here and there. He’s been doing a great job with our four and five and they are doing really well.”

Warsaw, paired with NorthWood and Penn for the afternoon, hung a 377 on the board to finish fourth on the team aggregate, eight strokes behind Mishawaka Marian and one better than John Glenn. 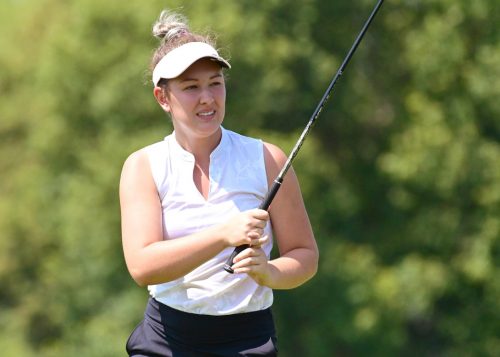 Marie Frazzetta, who had the toughest assignment of anyone in the field playing with Stillson and Wade, and shot a respectable 92, which was matched by teammate Olivia Robinson-Gay. Abbey Peterson fired a 93 from the five spot for the Tigers, Abigail Davis had a 100 and Delaney Byron had a 101.

After shooting a 399 at Knollwood Tuesday at the Penn Invite, Warsaw head coach David James was very happy to see his team shave off 22 strokes.

“From Knollwood to here, dropping 22 strokes shows a lot of improvement, but it also shows there’s room for a lot of improvement,” said Warsaw head coach David James. “There were a lot of places where we should have done better, but obviously when you drop that amount of strokes, it shows we can play at a high level.”

Wawasee tied Fairfield with a 417, falling off the pace with four of its five scores in triple digits. Taylor Cripe had the top score for the Warriors with a 93 and Rylee Firestone wasn’t far behind at 100, but Morgan Reel had a 107, Ayla Torres had a 117 and Izy Losee had a 127 for the girls from Syracuse.

“I think our youth and inexperience showed today,” said Wawasee head coach Steve Coverstone. “We played a couple that has a lot of trouble on it and we found a lot of trouble. Right now we are just trying to play our own game and get better. I haven’t seen our girls really worry about other teams or what scores are coming in. That’s all we really can do.” 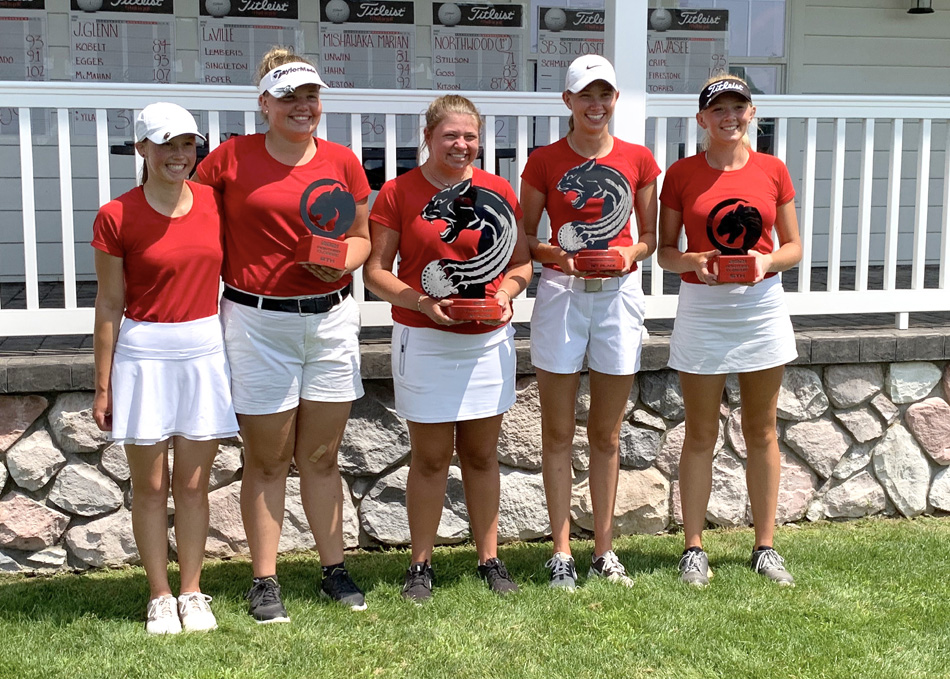 NorthWood poses with their hardware from its championship at the NorthWood Girls Golf Invite. From left to right are Kira Schrock, Riley Kitson, Bella Sechrist, Cybil Stillson and Breanna Goss.