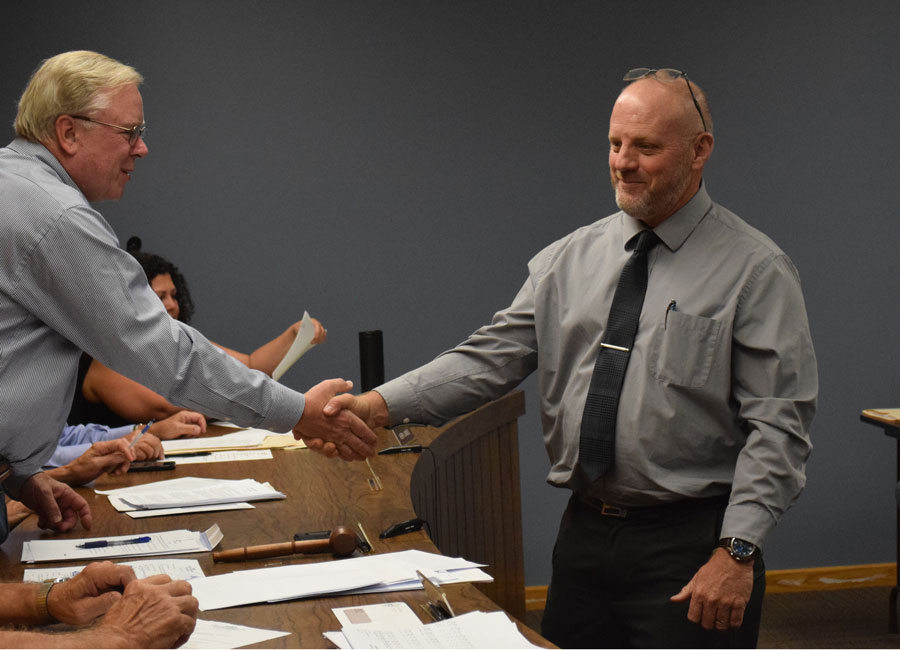 Syracuse Town Council President Larry Siegel, left, welcomes David Wilkinson as the new town manager. Wilkinson was approved by the council at its July meeting and signed his contract. His first official day as town manager will be Aug. 2

SYRACUSE — By the end of the Syracuse Town Council’s regular meeting Tuesday night, July 20, the town had a new town manager and a new public works superintendent.

The council approved contracts with David Wilkinson as the new town manager and Mark Aurich as the new public works superintendent. Wilkinson will start Aug. 2 while Aurich will begin Aug. 9.

Wilkinson is currently the human resources/purchasing agent for Whitley Manufacturing in South Whitley. Prior to his employment there, he worked as the chief of police and town manager for South Whitley.

Wilkinson said after working in the private sector for a while he wanted to get back to a “24/7 schedule.” He said he believes coming to Syracuse is the right career move for him at the moment, saying Syracuse is “a bigger and more progressive community to work in.”

Aurich said he was excited to work in Syracuse saying, “This town is a dead ringer for the small town I grew up in, in Michigan and I’m homesick.” 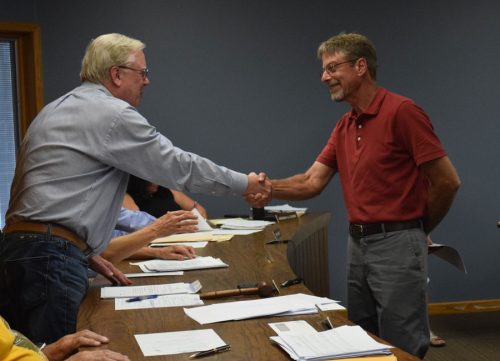 The council also took a first look at the proposed 2022 budget. Scanning over the budget, Councilman Bill Musser questioned the increase in the clerk-treasurer’s office. Virginia Cazier, clerk-treasurer, explained health insurance went up 20 % this year. Also trash collection and insurance increased as well.

Musser noted an increase of 50% in house cleaning and mowing in the clerk-treasurer’s budget. Cazier explained Wildman now comes in to deep clean the restrooms once a month and the new cleaning lady cleans the building twice a week. She also noted there have been increases in fuel costs.

The council approved amending the zoning of the Old Syracuse Elementary School to residential. Marlin Schwartz of Artisan Builders Group, came before the council to explain the project his company has for the old school.

The gym will remain a gym. Schwartz said Eastlake Athletic Club has shown an interest in partnering with Artisan Builders Group in operating the gym. If that doesn’t work out, Schwartz said something will be worked out with the tenants.

The company owns several commercial buildings in St. Joseph and Elkhart Counties, but has sold most of its multi-unit apartment units to come closer to Goshen and Middlebury and to focus on the Syracuse project.

Musser asked if the developers were aware of the parking restrictions and regulations. Schwartz said they were.

Councilman Paul Stoelting asked if there were any concerns regarding mold or lead. Schwartz said he believed there wouldn’t be any issues with either mold or lead and he’s having an asbestos review done on the building. He hopes to be able to start work within the next two months.

The town approved hiring Phend & Brown for work at Main and Railroad Streets for a cost of $250,853. A date for the work to begin still needs to be set.

In the public works report the town approved spending $59,199 on a new pump, rails, and control panel for the Burger King lift station. Work is to be completed within 60 days.

Chad Jonsson, park superintendent, reported it has been a busy summer for the park department. This weekend will be slower with no activities planned. The next big event will be the triathlon.

Jonsson also reported this season the farmers market has seen an uptick in vendors and customers and there has been a lot of improvements done in the town’s parks this summer with more projects scheduled.

Musser complimented Jonsson on the 400 bike riders for the Tours des Lakes this past weekend and the 300 participants for the Mudtastic. Councilman Larry Martindale also reported an erosion plan has been approved for the new ball fields so the bull dozers will be moving in soon.

Due to a conflict of interest CF Environmental, which as overseen the public works operations the last few months, requested David Menefee, who has a class III rating, be allowed to sign for the waste water treatment plant for July. The council approved.

Prior to the town council meeting the Syracuse Redevelopment Commission met briefly to approve paying claims.