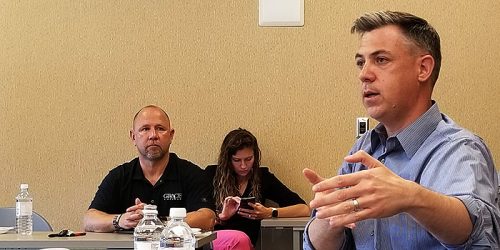 Congressman Jim Banks makes a point during a luncheon with the Kosciusko Chamber of Commerce in Warsaw on July 13. InkFreeNews file photo.

WARSAW — Third District U.S. Rep. Jim Banks, of Columbia City, has been appointed by House Minority Leader Kevin McCarthy to serve on the new select committee that will look at the Jan. 6 attempted insurrection on Capitol Hill.

The committee is expected to begin work as soon as next week.

“I have accepted Leader McCarthy’s appointment to this committee because we need leaders who will force the Democrats and the media to answer questions so far ignored. Among them, why was the Capitol unprepared and vulnerable to attack on January 6?”

Banks’ stature rose earlier this year when he became chair of the Republican Study Committee and is now poised to lead Republicans on an investigation that will very likely gain significant national attention.

As the leader of the largest conservative caucus, Banks has emerged as a top ally to Trump as he seeks to establish a Republican agenda that reflects many of Trump’s policies.

“If we really want to get to the bottom of what happened on Jan. 6 and prevent situations like that or the riots that occurred last summer, we should have a truly bipartisan effort to study it and make sure those situations never happen again,” Banks said.

He said he’d liked to have seen the scope of the investigation expanded to looking into “hundreds of violent political riots last summer when many more innocent Americans and law-enforcement officers were attacked.”

“Make no mistake, Nancy Pelosi created this committee solely to malign conservatives and to justify the Left’s authoritarian agenda. Even then, I will do everything possible to give the American people the facts about the lead-up to January 6, the riot that day and the responses from Capitol leadership and the Biden administration. I will not allow this committee to be turned into a forum for condemning millions of Americans because of their political beliefs.”

The Jan. 6 attack on the Capitol happened as members of Congress were preparing to certify results from the presidential election. Five people, including a Capitol Hill police officer, died in the attacks.

President Donald Trump talked to supporters prior to the attacks and encouraged them to head to Capitol Hill. Trump had urged Vice President Mike Pence to intervene and block the certification.

Some of the rioters talked of lynching Pence and others.

Banks, as well as Jordan and Nehls, voted to overturn the results of the November election.