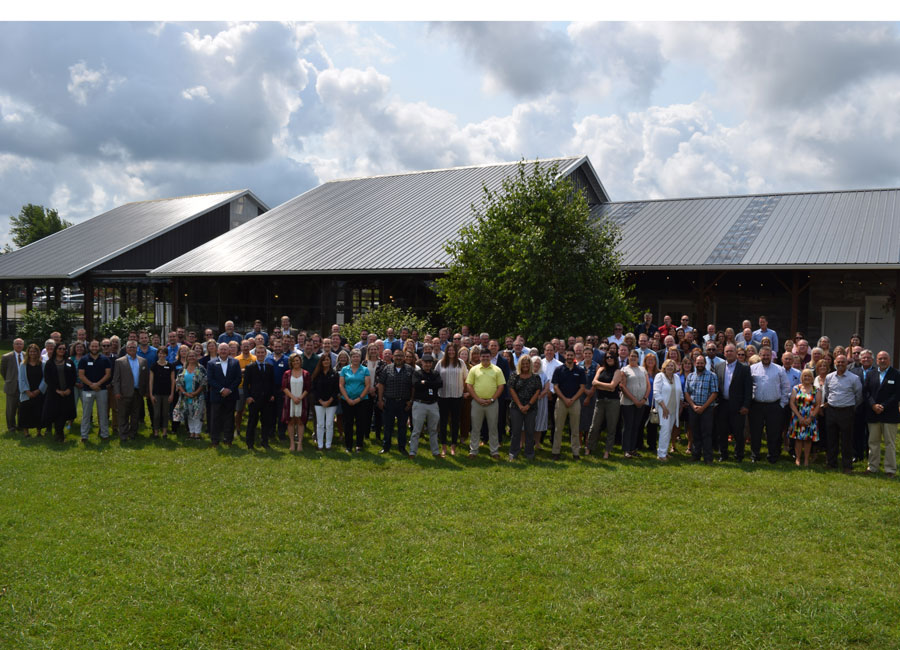 Members of the Kosciusko Chamber took time out from a luncheon honoring its membership for a group photo.

Farmhouse Kitchen and Catering, down the road from The Blue Barn, catered the lunch with Light Rail Café and Roaster, Winona Lake, providing cookies for dessert.

“As you know we do this in January on the coldest day of the year,” Rob Parker, chamber president and CEO, joked. “At least it’s not the hottest day of summer.” After a group shot of all the attendees, Glenn Hall, executive director of Kosciusko Home Care and Hospice, gave the invocation.

Parker did a quick review of how the Kosciusko Chamber dealt with the pandemic and statewide shut down, which included starting a Facebook page, To Go Kosciusko. Even with businesses opening back up, the Facebook page continues to have 8,000 interactions every day.

A vaccine video the chamber produced received 44,000 views. “The week we released that video we saw a 35% to 40% spike in people getting vaccinated,” Parker told the crowd.

The Kosciusko Chamber of Commerce was a finalist as chamber of the year for the state. To better serve member municipalities better, the chamber is working with smaller communities in setting up satellite offices, starting with Milford. “We want to make sure everyone has a voice,” Parker said.

The chamber has partnered with K21 Foundation, Live Well Kosciusko and other groups to work together to encourage community members to be as healthy as possible.

LaunchPad, the chamber’s initiative aimed at addressing the lack of child care, is offering fingerprinting for child care workers. “It’s quite busy, it’s challenging but it’s the right thing to do,” Parker said.

The chamber has also met with the Kosciusko County Commissioners and Council to discuss changing zoning laws to encourage more child care facilities to open in the county.

Dave Findlay, president and CEO, of Lake City Bank, the premier sponsor of the event. praised Parker and the chamber’s staff for their hard work during the pandemic. “I know it’s more than a return to normal,” he said about the luncheon. “I’m not a hugger, but I’ve become one.”

Findlay told the crowd how he was recently asked by his board where he saw the bank’s growth coming from, Indy? South Bend? Findlay told his board he expected areas of Kosciusko County would be competitive with larger areas when it came to financial and economic growth in the coming year or two.

After Findlay’s remarks, the awards were handed out.

Polywood received the Business of the Year Award which welcomed 160 new employees last year, and is in the process of expanding its manufacturing facilities.

Winona IT received the Raising Star Award. Winona IT is a fairly new company and has grown in the number of employees and its customer base in its first two years.

The Health and Wellness award went to Kosciusko Government. County government recently conducted a health risk and biometric assessment of its employees and used the results to develop a comprehensive wellness program for county government employees.

The Ambassador of the Year award went to Heather Lardino of 1st Source Bank.

The Woman of the Year Award went to Angie Ritchey, chief technology officer at Lake City Bank for her work in the community, work and at home.

The Man of the Year Award went to Dr. David Hoffert, superintendent of Warsaw Community Schools. Hoffert was described as an exemplary leader who is an inspiration to others. “Whatever it takes” is a common phrase heard from him as well as “how can I help.” 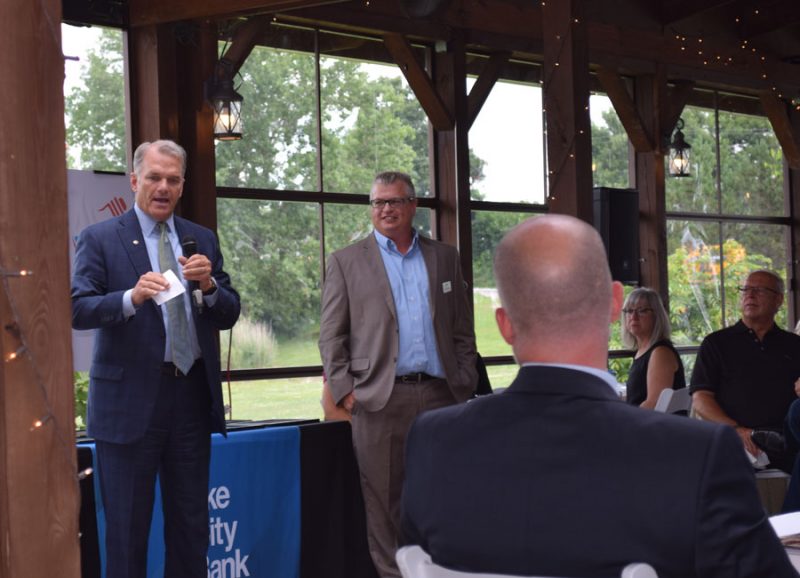 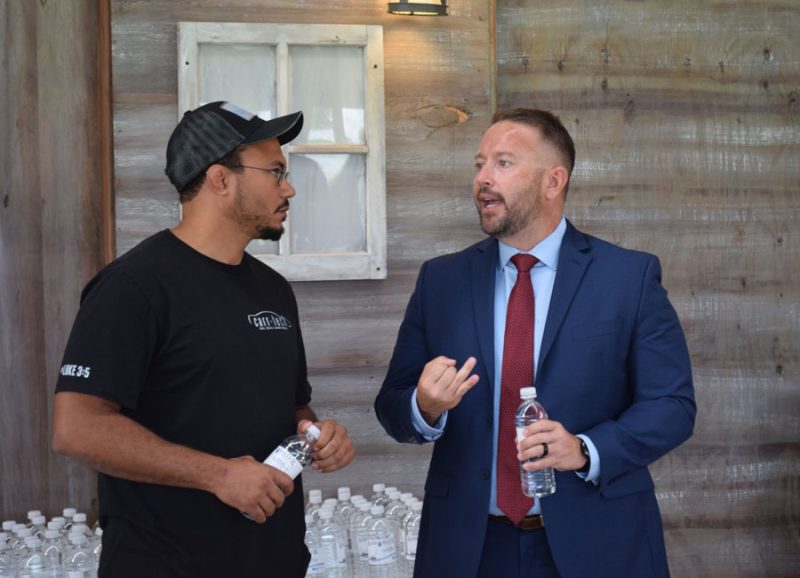 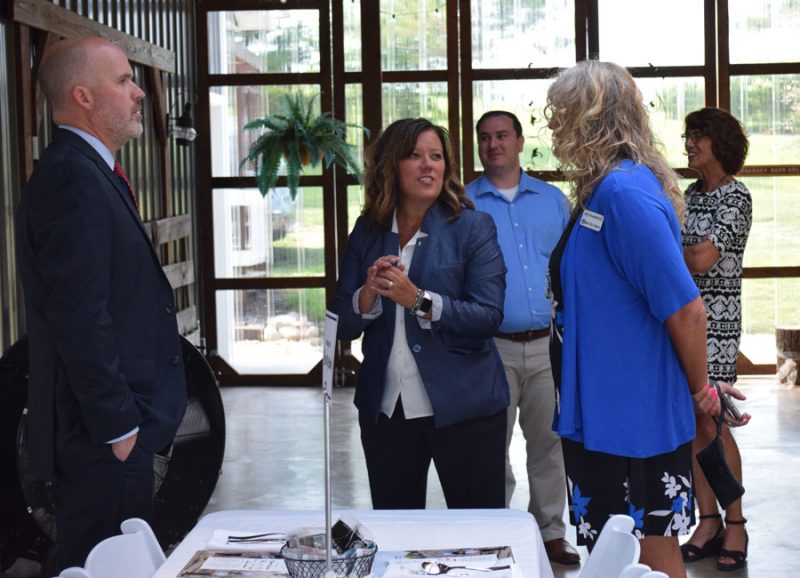 Don Robinson, left, chats with Stephanie Leniski and Kim Strawbridge, all from Lake City Bank, during the networking portion of the Kosciusko Chamber’s membership luncheon. 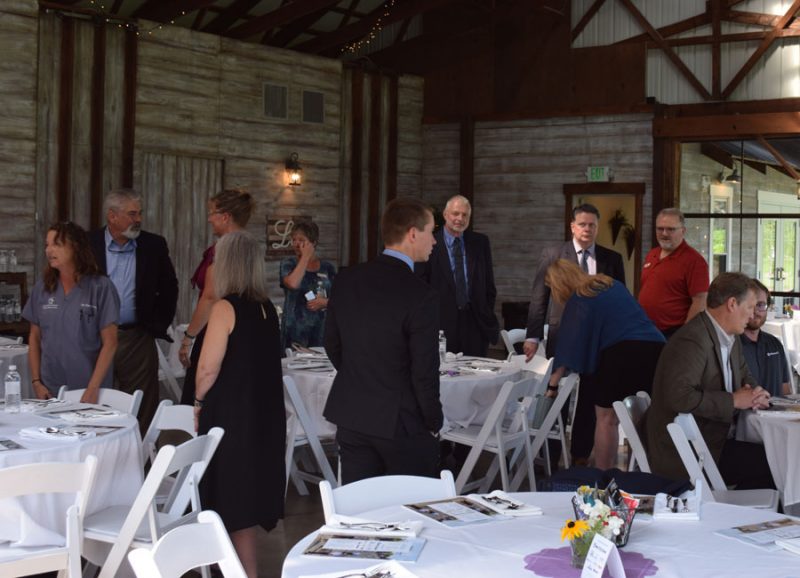 Chamber members start to gather for the Kosciusko Chamber’s membership luncheon. About 250 people attended the event which was held at Blue Barn Berry Farm in Syracuse