Officials believe the turnout at the grandstand Tuesday night, July 13, was the biggest in years. InkFreeNews photo by Dan Spalding. 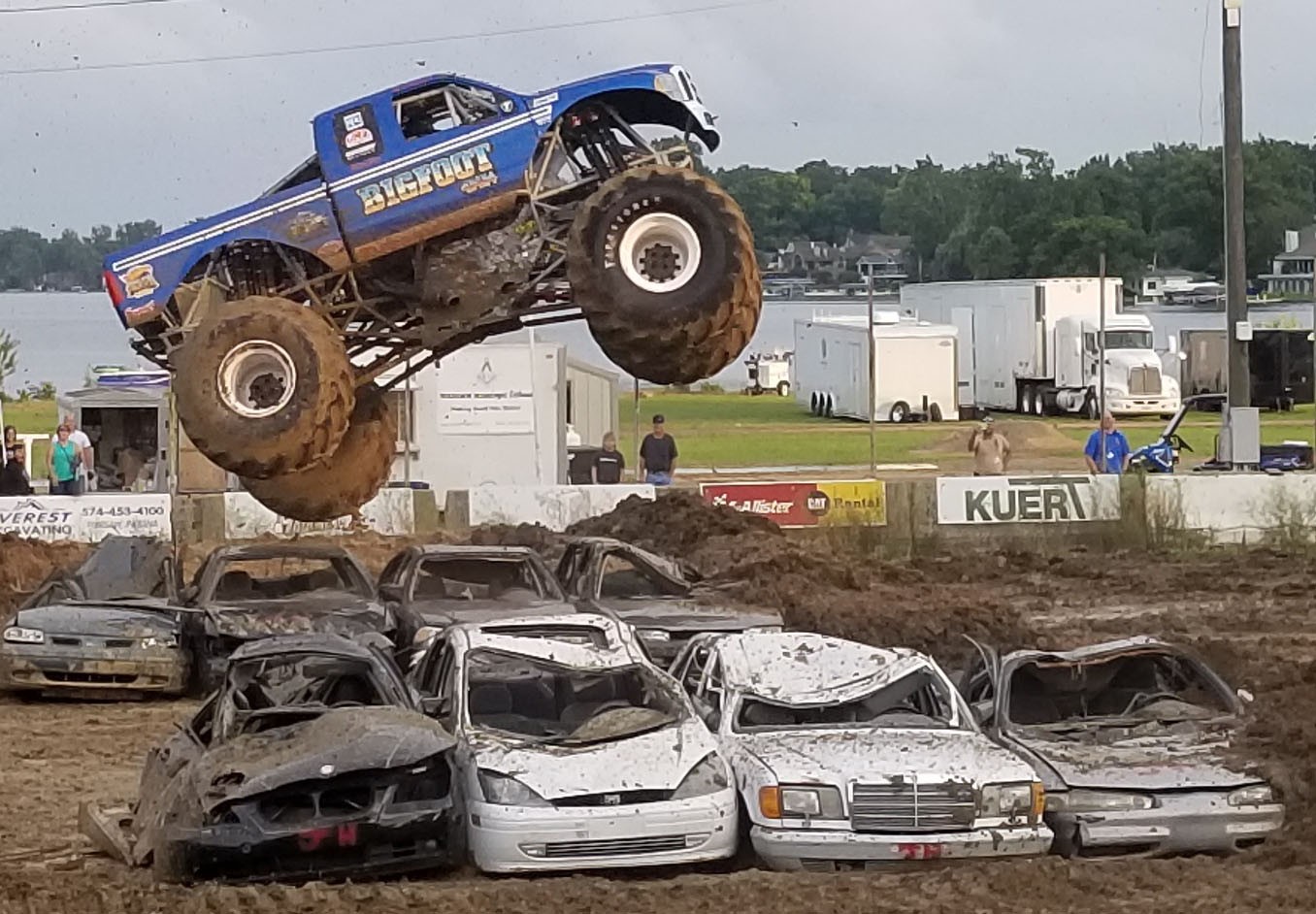 Many of the trucks took flight over demolished cars during a monster truck show Tuesday night. InkFreeNews photo by Dan Spalding. 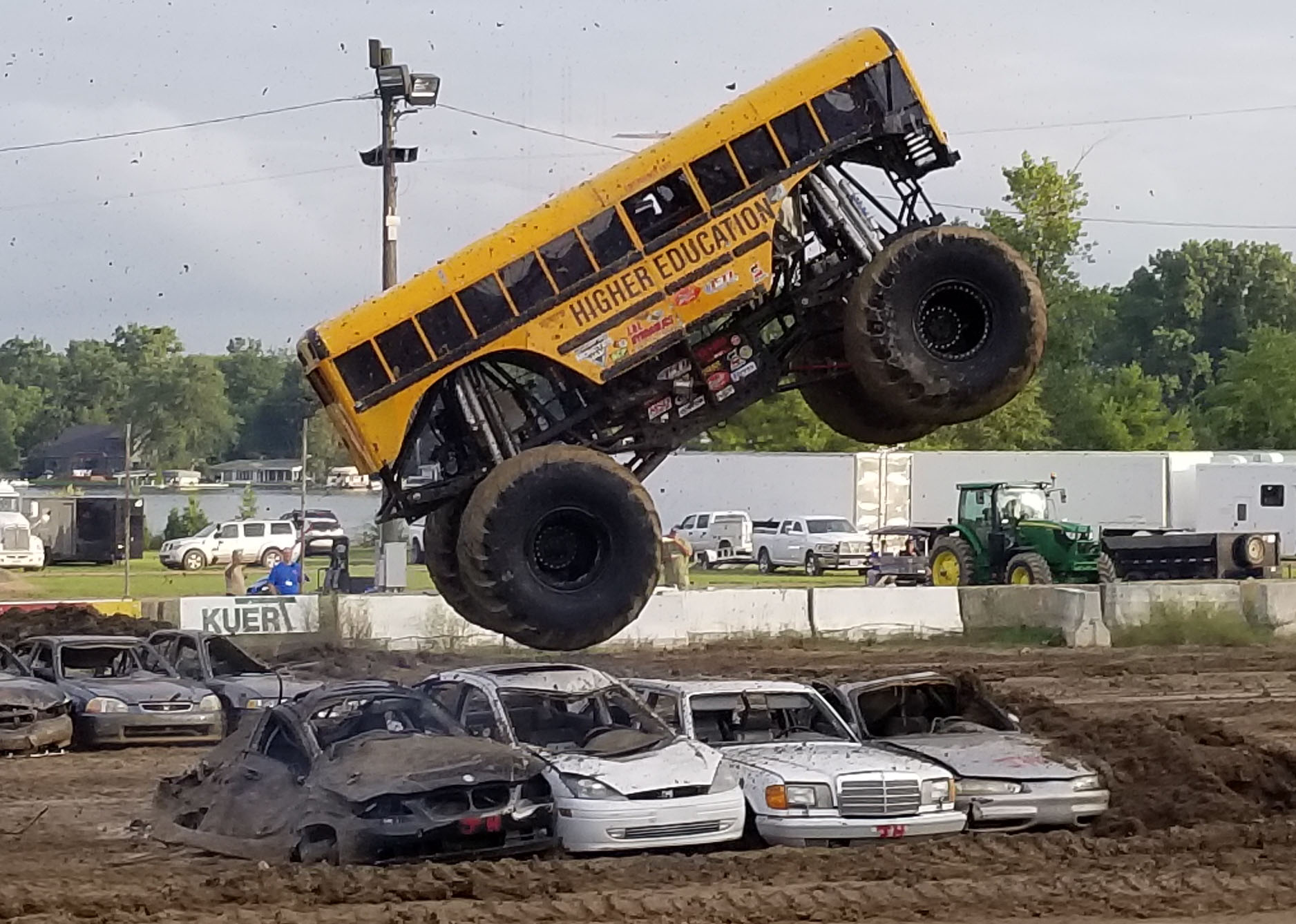 A truck named Higher Educations jumps over some cars Tuesday night at the county fair. InkFreeNews photo by Dan Spalding.

Unlike many events in recent years, the grandstand was packed with people who came to see The Monster Truck Mash Tuesday night.

50 minutes after the show’s 7:30 p.m. start time, people were still passing through the grandstand entrance but were milling around trying to find an open seat and creating a bottleneck.

Woods, moving around with an orthopedic boot on one of her feet, was busy trying to break up the bottleneck by encouraging fans to sit in the lawn areas beyond the metal seats.

Bottlenecks at the entrance have been rare over the years as organizers have tried an assortment of entertainment and were forced to give up on motorized racing after a recent lawsuit.

But Tuesday was different.

Woods said the entire grandstand on the north side was packed. She estimated the crowd to be “at least 3,500” people.

Woods, who has been with the fair for 12 years, strained to think of a bigger crowd in recent years. She distantly recalled two tractor pull events that had a strong turnout.

“It’s a wonderful problem,” Woods said over the din of monster trucks revving engines in the background.

She said she was ecstatic and “over the moon” about the turnout.

A late afternoon shower gave way to pleasant conditions Tuesday night with temperatures in the 70s.

Fair-goers no longer have to pay for parking and admission to grandstand events are now free.

Woods said she thinks that might be part of the reason for a good crowd but says the ruck show operators, have built up a good reputation for putting on entertaining shows.

Much of the credit she said, goes to Darrell Hicks, a Warsaw man who volunteers his time to organize the shows.

The show included a little bit of comedy mixed in with a series of trucks that flung mud and took to the air as they ramped up over collections of demolished cars.

Determining a winner is based on crowd reaction, giving kids a fun way to get involved.

She said Wednesday that they did not yet have attendance figures for Tuesday.

The race is one of several harness racing events at the fairgrounds this summer and officials are hoping it catches on.

“We’re hoping it is strong,” she said. 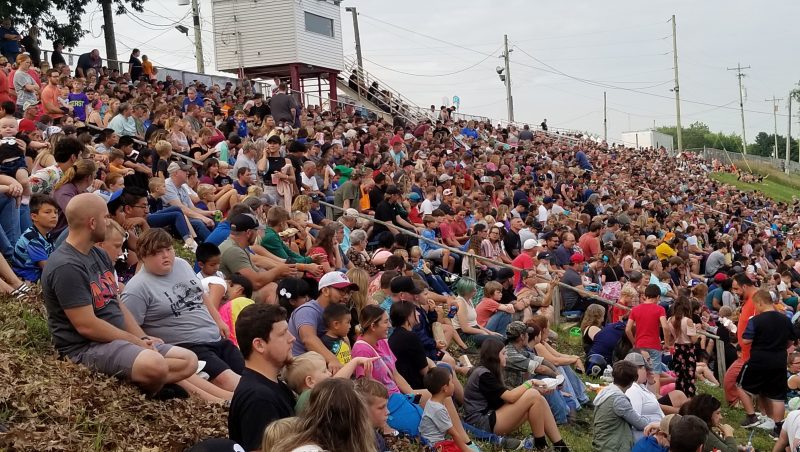 Another view of the grandstands. InkFreeNews photo by Dan Spalding. 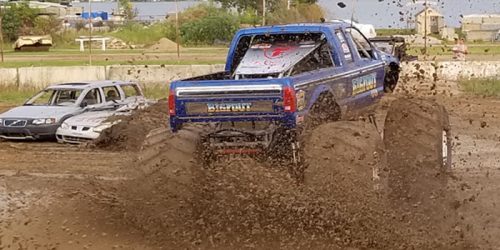 The mud was flying Tuesday night at the fairgrounds. InkFreeNews photo by Dan Spalding.

Fans were still entering the grandstand 25 minutes after the show began. InkFreeNews photo by Dan Spalding.