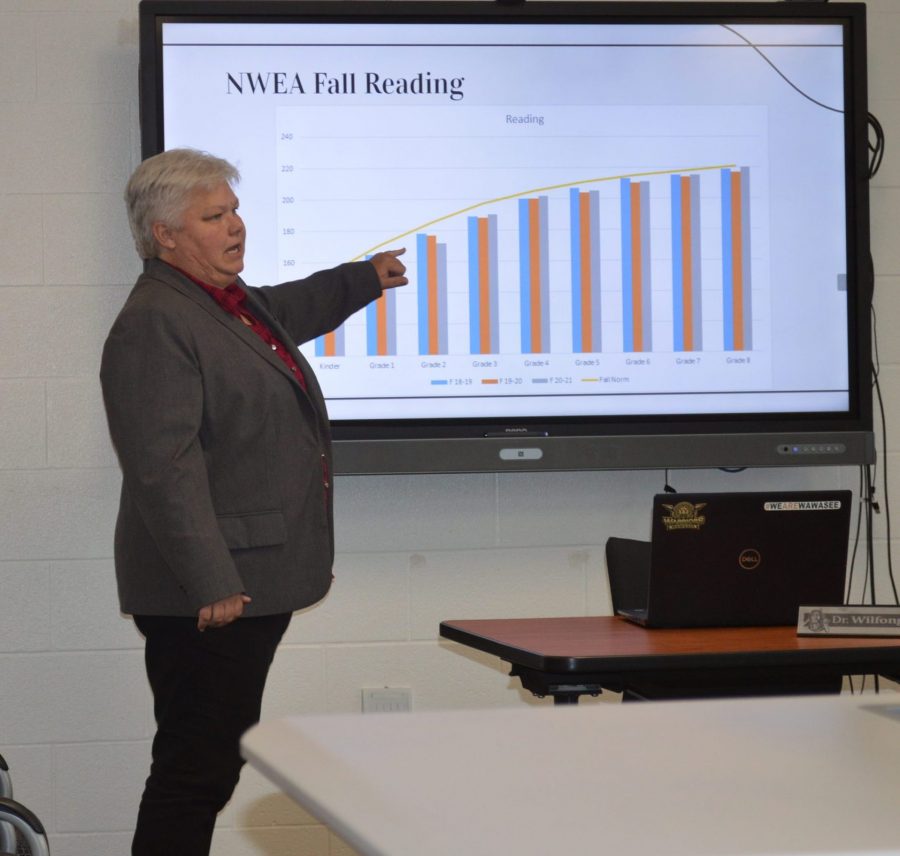 SYRACUSE — How much learning loss really occurred as a result of COVID-19? It has been a topic of discussion and concern and during the regular monthly meeting of the Wawasee School Board Tuesday evening, July 13, in Syracuse the board heard a brief report about it from Dr. Shelly Wilfong, assistant superintendent.

Wilfong used NWEA testing results for her report. NWEA is a research-based organization providing national benchmark testing data assessments that has been used by the Wawasee Community School Corporation for several years.

She noted, generally speaking, as the kids get older there was less of a dip in learning of reading. But in math all grades except the fourth showed a drop from previous years. “We are still above the norm nationally but not where our students normally are at the end of the school year,” she said, adding some grades made significant progress.

Wilfong cautioned the aggregate information does not identify individual student achievement. Some students may have achieved better results than they ever have while others may have had significant learning losses.

In regards to addressing the results, properly understanding the data will be focused on, students will be met at their current level, the one size does not fit all approach will be used and strategic support of students will be emphasized.

In other business, the board heard from patrons Vicky Morton and Dave Stookey. Morton said she is concerned about two groups becoming active at the local level — Purple for Parents of America and Citizens Renewing America. She said they spoke last week at a meeting in Winona Lake and have stated “they are out to take over local school districts.”

The groups are opposed to the Critical Race Theory and want the government out of schools and no “government sanctioned racism.” She said she wanted to make the school board aware of the two groups.

Stookey, a long time track and cross country coach, said he wanted to know if Wawasee plans to hire a strength conditioning coach with the proper background since the previous one had apparently left for another school corporation. He said Wawasee High School simply can’t compete in sports without a strength coach against schools who have a full-time strength coach.

And the coach needs to be paid in accordance with their credentials, he added.

Both Morton and Stookey were told by Dr. Steve Troyer, superintendent, he would be in contact with them.

Also on the agenda, the board approved “to continue the discussion” about establishing a Wawasee Early Learning Center in Polywood in Syracuse. It would be for children ages 3 by Dec. 1 to 5 or entering kindergarten. Polywood would reserve 20 seats for children who meet the age criteria and are also children/dependents of staff at Polywood.

It would be open from 4:30 a.m. to 3:30 p.m. at a cost of $40 per seat or a total of $800 per day. Staffing the early learning center is still tentative because it is not yet known how many kids would be dropped off and at what times of the day.

No contract has been signed with Polywood and the school board will be informed of additional developments.

In other business, the board approved Troyer’s recommendation the wearing of masks be optional for students and employees effective July 1. Troyer noted Gov. Holcomb’s executive order about facemasks in schools expired June 30 and local school districts can now establish their own policies.

Troyer cautioned the county health department is still being consulted and if there any changes due to another rise in COVID cases, the issue can be addressed again.

Board member Mike Wilson said he wants to make sure students who do wear masks are not mistreated. Troyer said those situations would be addressed through normal student codes.

• A $25,000 Views On Learning grant was approved by the board and will help the school corporation meet instructional technology goals.

• Milford School teacher Mary Brower was one of only 12 out of 96 participants to achieve the highest level of certification as a Ford Next Generation Learning Certified Project Based Learning trainer.