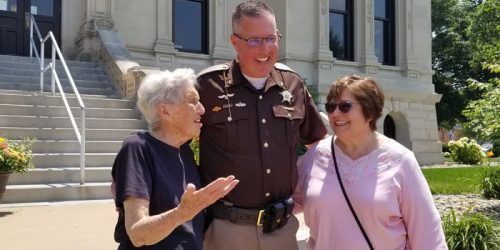 WARSAW — Kyle Dukes ushered in a new era less than three years ago when he was elected sheriff of Kosciusko County, and he’s hoping to extend his tenure for another four years.

And the announcement coincided with a plum endorsement from Jean Northenor, the former Kosciusko County Republican Party Chair who continues to wield political influence locally.

Three years ago, Northenor supported incumbent Rocky Goshert in the Republican primary when Goshert was challenged by Dukes and two others.

Northenor said she generally supports officeholders for a second term if they’ve done good work in the first term.

“I’d like to see him have another term to continue what he’s doing,” Northenor said.

In his first run for office, Dukes’ campaign theme was a “Fresh Start.” This time, he’s embracing “Community First” as a mantra.

“It’s more than just a slogan. My decision-making has always been what is best for Kosciusko County,” Dukes said.

He said he’s “very proud of the sheriff’s office and the direction we’re going and it would truly be an honor to be re-elected sheriff of Kosciusko County.”

Dukes said they’ve worked hard to create a unified approach to policing in the county, part of that being a multi-agency drug task force, NET43, which has conducted numerous high-profile drug raids.

He said he thinks NET43 is making a dent in drug trafficking.

“We’re going to keep the same game plan for NET43,” he said.

He also touted the drug interdiction program in the jail that’s known as JCAP, and said he’d like to see that program expanded.

Dukes also hinted that changes could be in store for the work-release program that would involve community partnerships.

He was asked about the challenges of hiring officers in light of some of the controversies law enforcement agencies across the country have faced in recent years.

Dukes said the number of job applications received in the past year is less than half of what was seen during his first year in office.

“Looking at our wages, we are lower than surrounding agencies and it’s time to catch up – and I believe – go beyond that,” he said.

Kosciusko County Sheriff’s Deputy Jim Smith announced his intentions to run as a Republican for sheriff earlier this year.

The Republican primary will be in May 2022.

Dukes said he plans to remain positive during the campaign and brushed aside a question about whether he thinks others will choose to jump into the race.

“My main focus right now is running the sheriff’s office,” he said. 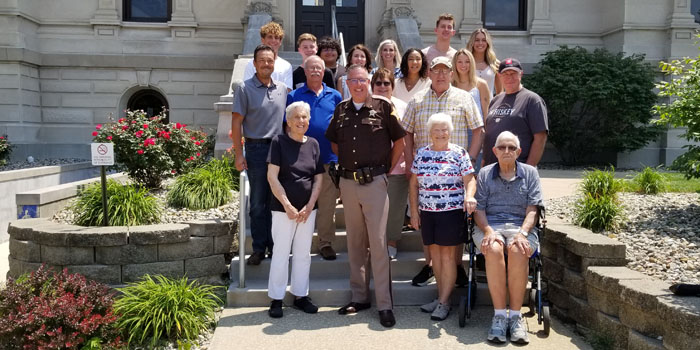 Dukes (C) stands with supporters outside of the courthouse on Tuesday before announcing his bid for re-election.