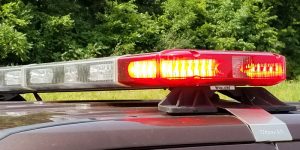 SYRACUSE — Brenda Foster, 68, Milford, and Allan Foster, 72, Milford, were both transported by helicopter to a Fort Wayne hospital following a two vehicle crash Tuesday, July 6. The crash, which occurred at 10:18 a.m., was at CR 29 and CR 52, north of Syracuse.

Brenda Foster sustained internal injuries and is said to be in critical condition. Allan Foster complained of chest pain, which was reported as nonlife-threatening.

The front end of Garrett’s vehicle hit the driver’s side of the Foster vehicle. The Garrett vehicle caught fire after impact.

Garrett was cleared by medics and released at the scene. He was cited for disregarding a stop sign causing bodily injury.