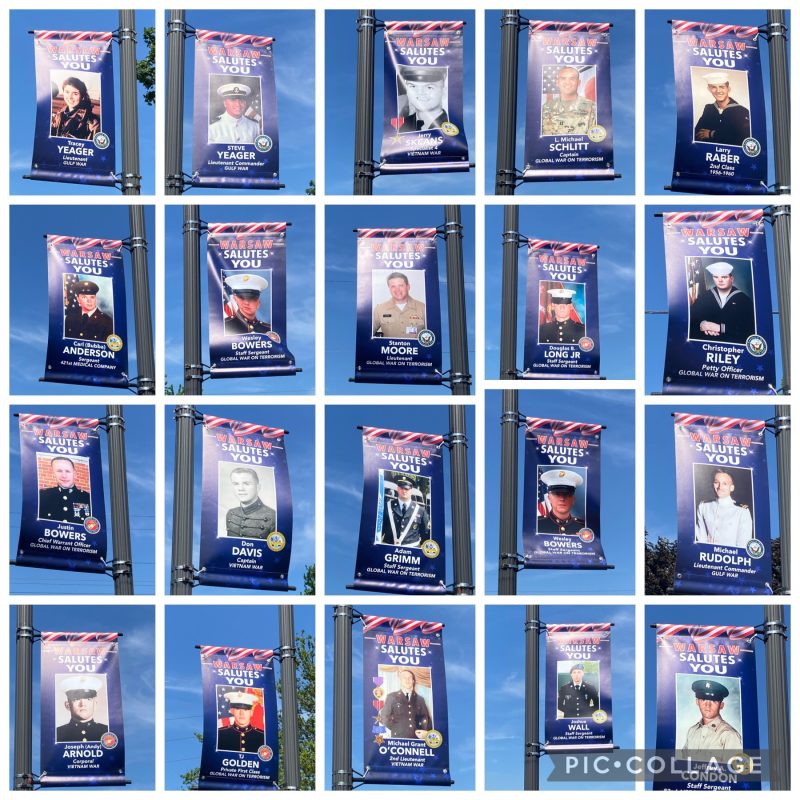 Stone was inspired by her older brother, Nate, a former KYLA member and WCHS grad, who is currently serving as a Lieutenant in the U.S. Navy.

The Warsaw Salutes You Banner Recognition project was Stone’s 2020 KYLA Service project; unfortunately, the KYLA program was postponed due to COVID.

Stone was determined to finish the project and ensure the service men and women were honored.

The first banners were displayed on Veterans Day 2020.

“There was such overwhelming support and interest that she continued the project with the help and support of my mentor, Navy mom Miechi Petro,” Stone said. “The beautiful artwork was created by Tara Haack and designed and printed with the help of Graycraft Printing of Warsaw and with cooperation of the mayor’s office and Warsaw Street Department. Truly a Warsaw hometown team effort.”

“Banner applications were submitted by families of service men and women and represent all branches, ranks and eras. Many touching stories of service and heroism were shared in the process, including Purple Heart and Medal of Honor recipient, Vietnam veteran, 2nd LT Michael O’Connell, whose banner was anonymously sponsored by a generous military veteran who sent a check and letter expressing her desire to honor a veteran,” Stone said.

The 20 new banners hung for Memorial Day feature the following:

Samuel, Rachel and Jack Yeager, who are lifelong friends of Stone, chose to surprise their father, Steve, with a special Christmas gift. They ordered banners honoring their parents, Tracey and Steve Yeager.

This was very special to Stone, because Steve and Tracey were influential in inspiring Elizabeth’s brother. Nate led the “Race for Trace” to honor Tracey Yeager as his 2011 KYLA project.

Stone would like to see the banner cycles continue; however, because she is beginning her next chapter of college life, plans are in the works for the project to be managed by another group who will maintain the integrity of her original project.

To qualify, honorees must be a former or current resident of the greater Warsaw area and must be serving or have served in the United States Navy, Army, Air Force, Marines, Coast Guard or National Guard. The banner will be 19” wide x 40” tall, made of a heavy vinyl, printed the same on both sides and will display the service person’s photograph, including their full name and branch of the military they are serving or served in. The addition of rank and era of service are optional additions to the banner.

The banner will be displayed on the Market Street corridor. Banners will be placed on a first come, first served basis. All banner locations shall be determined solely by the City of Warsaw Parks Department. The Warsaw Salutes You Banner Recognition Program is not responsible for replacing banners that are stolen, damaged, or destroyed due to age, vandalism or any acts of nature. Once the banner is no longer used, it will be returned to the applicant.

Questions may be sent to [email protected]