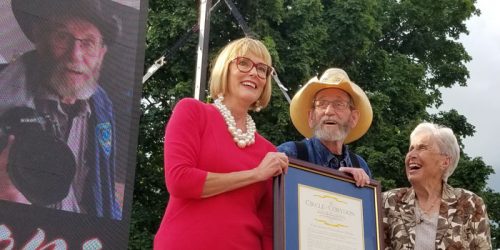 With an image of him to the left, Al Disbro (C) poses with longtime friend Jean Northenor (R) and Lt. Gov. Suzanne Crouch after being presented with the Circle of the Corydon award for community involvement. InkFreeNews photo by Dan Spalding.

WARSAW – After a lifetime of avoiding the spotlight, Al Disbro could not escape.

On Friday night, July 2, the man who has literally taken tens of thousands of photos in Kosciusko County, was the center of attention at Warsaw’s First Friday, when he was surprised with a state award.

A spotlight on hometown heroes set the stage for a surprise presentation honoring Disbro for his photographic work in the community.

The 82-year-old retired banker has been taking photos for 70 years and is widely considered to be the community’s eye behind the camera, having captured photos of events, people, moments and plenty of Kosciusko County Republican politics.

The presentation was part of a ruse arranged beforehand in which – midway through a presentation about hometown heroes at First Friday – Jean Northenor (who worked with Disbro for decades at Lake City Bank) lured him to the stage after asking for an extra hand as she made her way there.

Organizers had no problem making sure he would be at First Friday since he’s almost always there taking photos. But they also knew he could become a “flight risk” if he figured it out too early and were nearby to prevent him from ducking away.

Northenor, who formerly served as county auditor, bank president and chairwoman of the Kosciusko County Republican Party, then admitted her role Friday was simply to coax Disbro to the stage.

“He’s been my buddy all these years, getting me into and out of trouble,” Northenor said onstage, drawing chuckles.

Even after being on stage, Disbro kept looking for photo opportunities as others spoke about being a hero.

Tom, a former Ambassador of the United States to the United Nations Agencies for Food and Agriculture, threw out a few hints in his short address, suggesting the recipient was known to put the “focus” on others while always being modest, humble and uncomfortable in the spotlight.

“Those who shape our world are those who go unnoticed,” Tom said. “And that’s about to change.”

Crouch then read the proclamation, which was nominated by State Sen. Ryan Mishler, Bremen, saying the recipient has demonstrated “the best qualities exemplified by our state’s greatest citizens.”

“Having been deemed worthy of such recognition, Al Disbro is included and declared to be a member of the distinguished member of the Circle of the Corydon – signed by Gov. Eric Holcomb – congratulations Al,” Crouch said.

Disbro suggested he knew something was up when he heard his favorite song played in the background at First Friday and then saw his daughter was in attendance.

“I can’t believe this,” Disbro said, nodding to Northenor. “Only she could get me up here.”

A series of video thank-yous were then shown on a big screen where other heroes were also highlighted.

Afterward, Disbro was the center of attention for other photographers.

Disbro said he caught the photo bug in 1949 when Pat Collier, who ran the boys club and was known as the hometown photographer, showed him how to develop photos.

“When I seen that paper in that solution and that image, I was hooked. My folks bought me a camera that year for Christmas,” Disbro said. 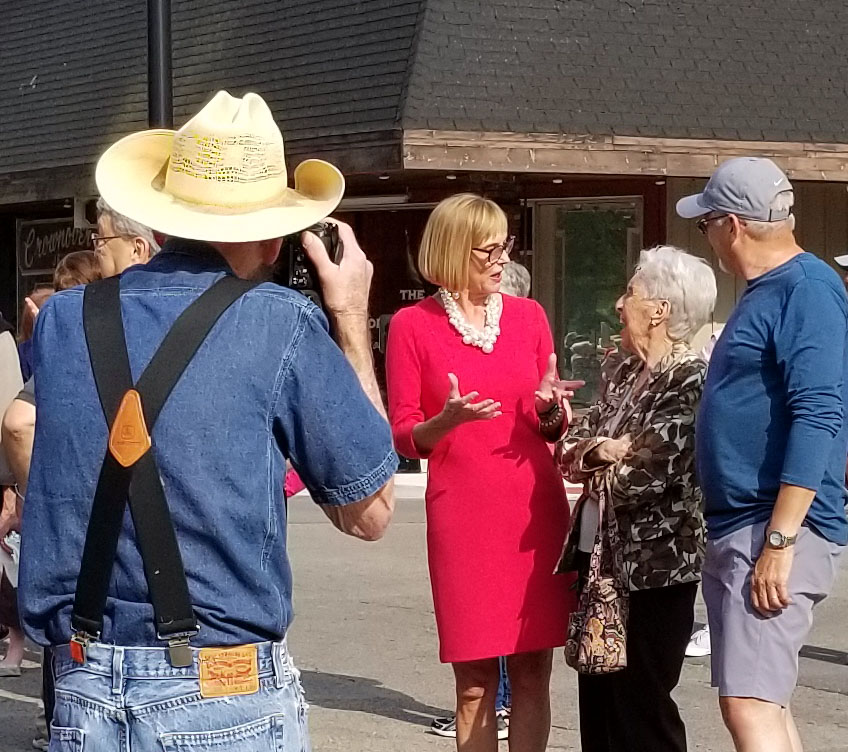 Before the ceremony, Al Disbro (L) was doing what he always does at First Friday, this time framing up a photo of Lt. Gov. Suzanne Crouch (C) with Jean Northenor and an unidentified person to the right. InkFreeNews photo by Dan Spalding. 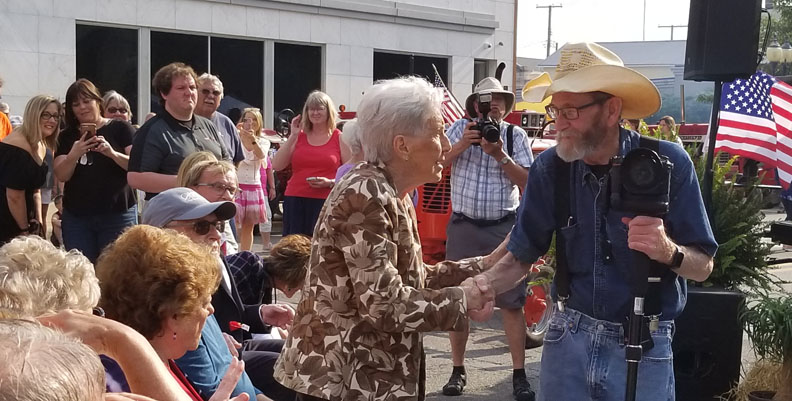 Longtime friend and Republican leader Jean Northenor asked Al Disbro for an escort up to the stage where he was then presented with a suprise award for community involvement. InkFreeNews photo by Dan Spalding. 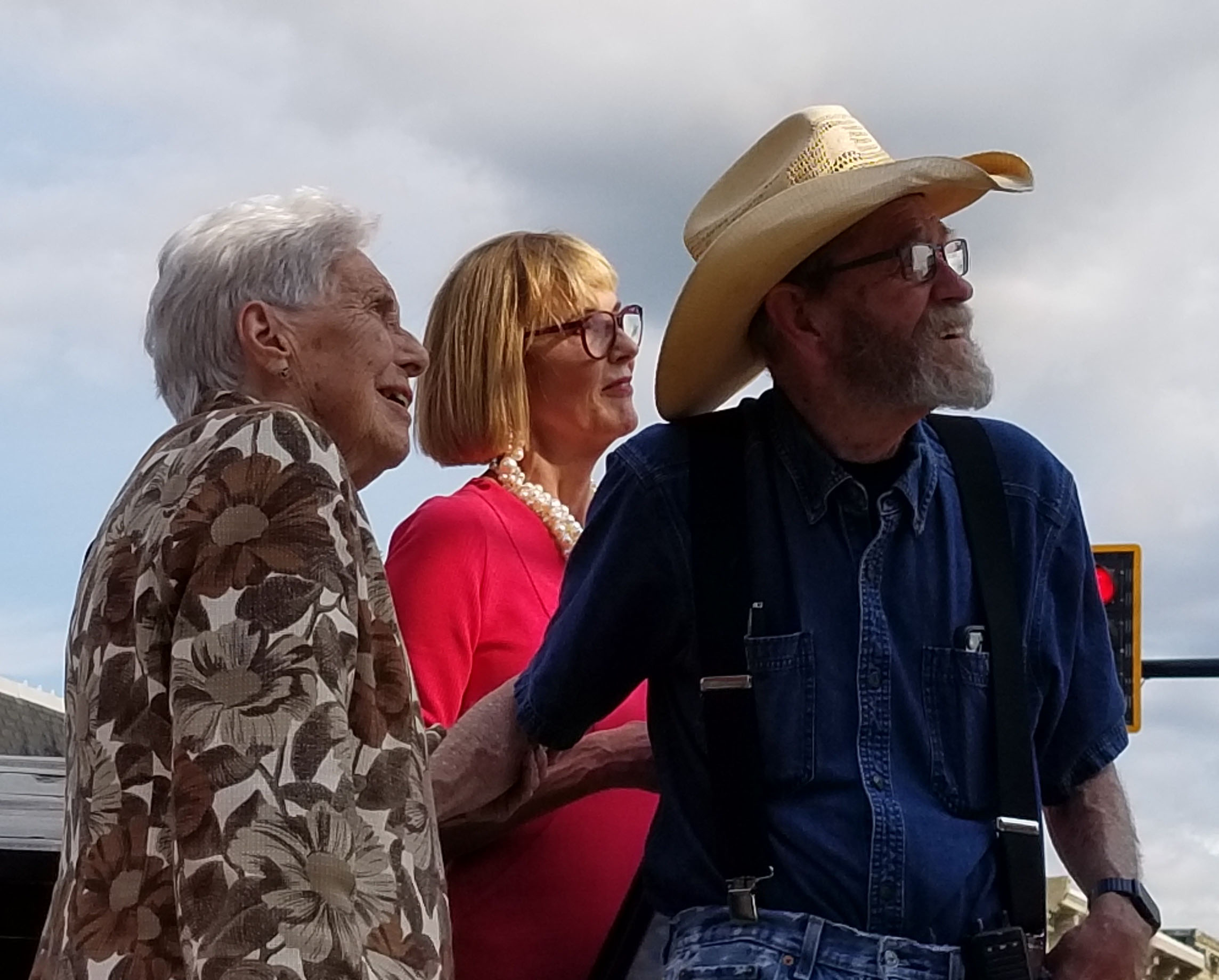 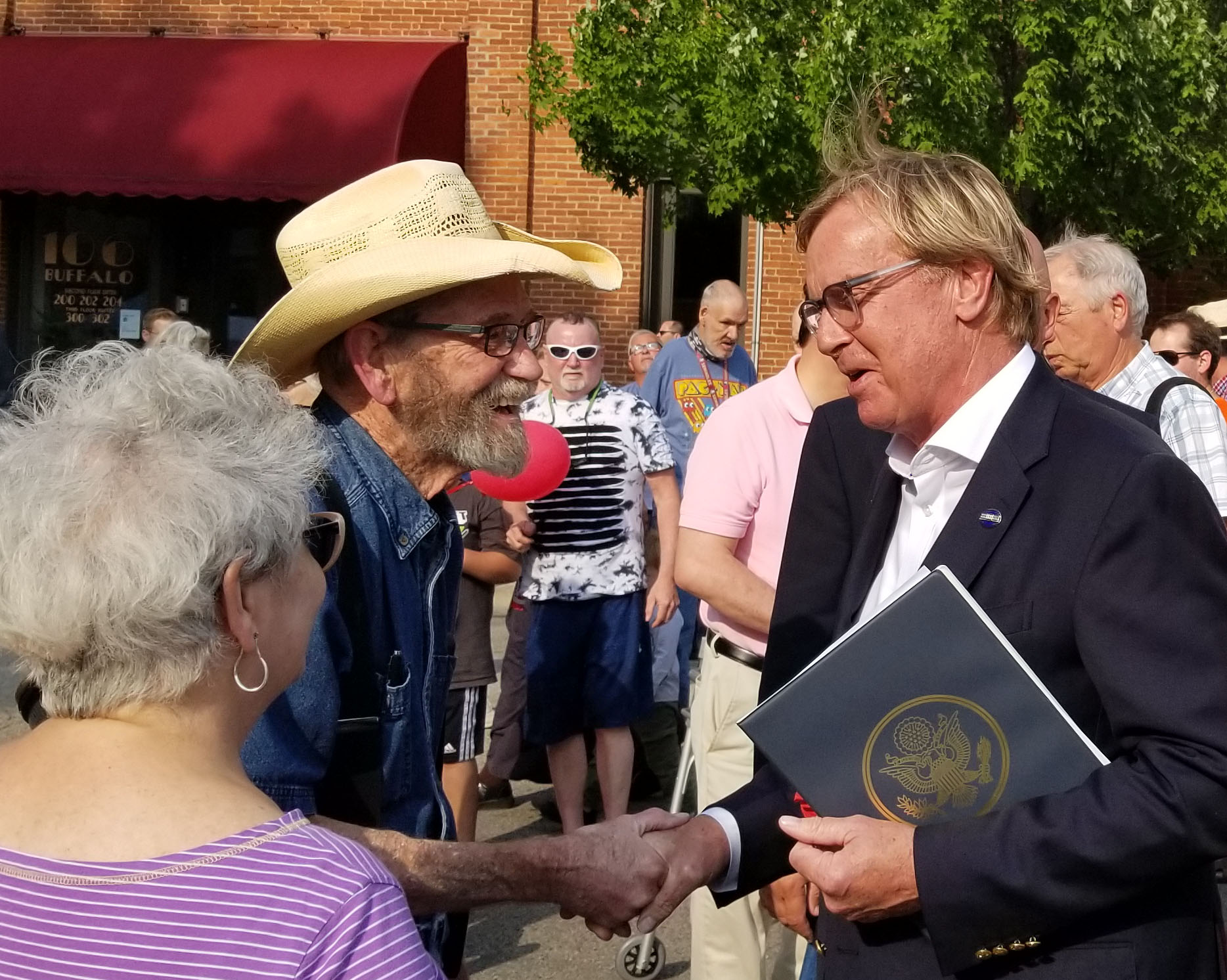 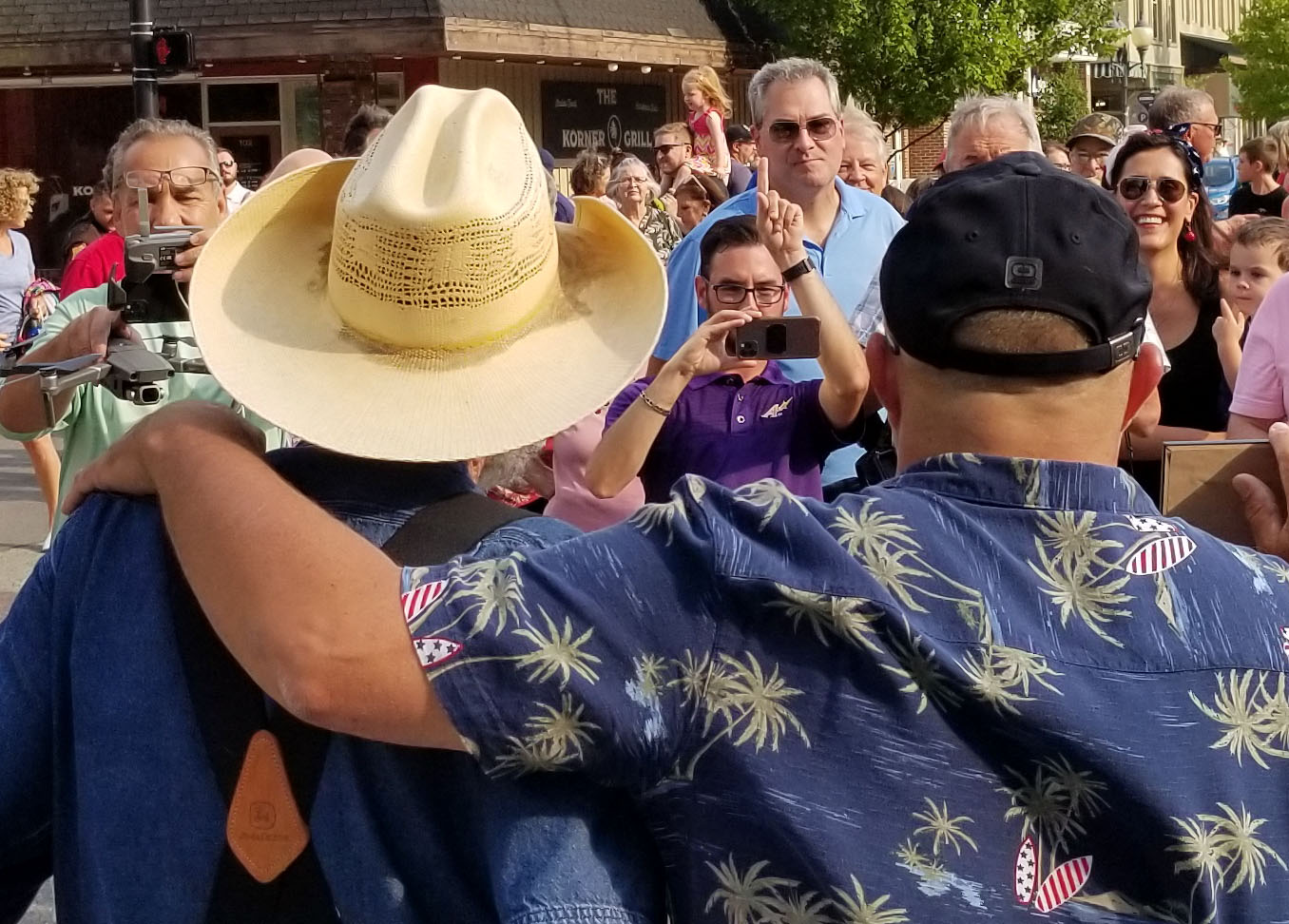 Al Disbro was the one being photographed Friday night after he was presented with a state award. Pictured with him to the right is Mike Loher, who organized the surprise presentation. InkFreeNews photo by Dan Spalding.