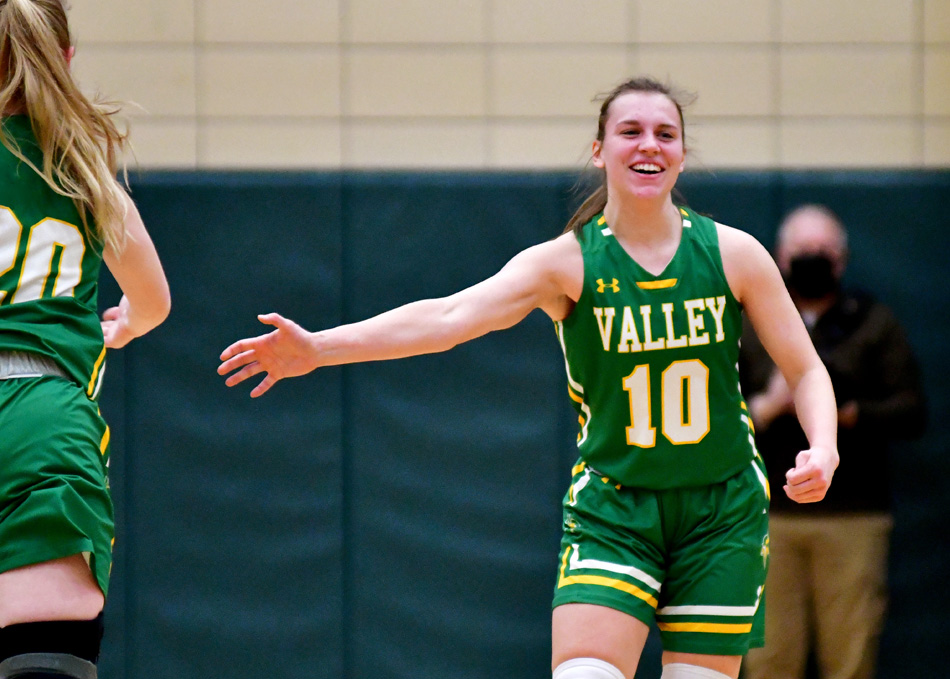 Sidney Wagner had a huge girls basketball season for Tippecanoe Valley, then went ahead and had an impressive track campaign. InkFreeNews photo by Mike Deak

AKRON – The next ‘ONE’ for Tippecanoe Valley girls basketball sure didn’t disappoint. Sidney Wagner is next in the InkFreeNews Top Ten athletes for 2020-21.

Wagner grew up watching Anne Secrest and Sophie Bussard (among many others) display greatness on Rita Price Court and around the area for head coach Chris Kindig and the Vikings.

Wagner was quick to heap praise on Bussard for her leadership in helping her grow as a point guard and overall player after a stellar career.

The super-versatile Wagner kept up the tradition of great Valley players over the years in her four-year career that saw her total 1,012 points, grab 434 rebounds, dish out 291 assists and swipe 261 steals. She finishes her career among those idols who played before her, ending seventh all-time in career scoring and the eighth Lady Vike to surpass 1,000 points.

She took her own path, however, to garnering IFN Girls Basketball Player of the Year honors this past season, mixing in a strong track and field career and building a strong reputation as a motocross rider, just for good measure.

On the hardwood this past season, Wagner averaged 19.6 points per game, and opponents were only able to hold her under double figures one time (seven versus Warsaw). In addition, her stellar senior campaign saw her average 7.7 rebounds, 5.0 assists and 4.5 steals on her way to a commitment to Trine University next year to play for head coach Andy Rang. Her points per game tied her for 29th-best in the state, her assists were 20th and steals were 21st in a show of just how well-rounded and elite her game was this past season. Even rebounds, she was tied for 120th, not too shabby for a point guard.

She topped the 20-point mark 11 different times during the season against some very quality opponents and exploded for 37 points in a late season win over SouthWood (58-43). And she did it when it counted most. Seven of those twenty-plus performances came in the last nine games of the season as she seemingly, at times, had to carry quite the load on her shoulders for the Vikings.

Those shoulders are strong ones, though, as it turns out. In those last nine games, she notched double digits in rebounds four times and averaged over five assists and steals per game in that stretch.

As a pole vaulter, high jumper and sprinter for Jenny Moriarty and the Vikings track and field team in the spring, Wagner made her mark as well. That included being the Vikings’ MVP for field events and scoring in the pole vault, high jump, 400-meter dash, and 4×100 meter relay in the IHSAA Bremen Sectional this past spring.

As if all that was not enough, Wagner also excels in a non-IHSAA sport, motocross, earning a number of sponsorships and personal accolades as a rider.

Tippecanoe Valley has had its share of stand-out girls basketball players for sure, but this ‘ONE’ was different, and the same, all at once.