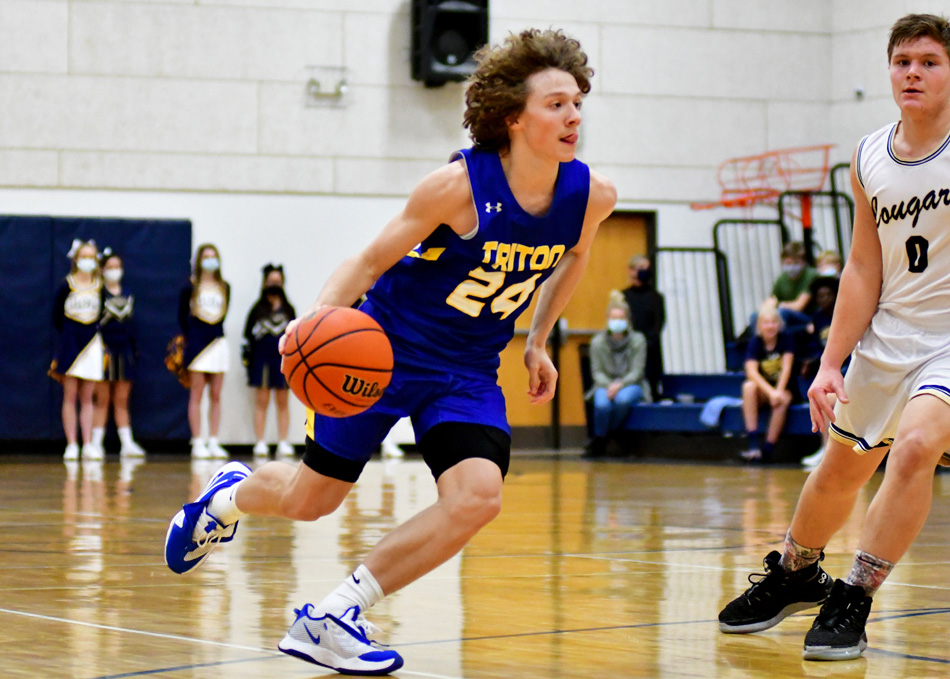 Triton’s Tyson Yates was one of the major players in Triton’s rise back to hoops prominence. InkFreeNews photo by Mike Deak

BOURBON – The Triton boys basketball team and head coach Jason Groves had a lot of weapons at its disposal this past season, which was evident in winning the Hoosier North Athletic Conference title (shared with LaVille), a sectional championship, amassing 20 wins (the most in eight years for the Trojans), and reaching the Class 1-A Elite Eight.

The constant throughout it all: Tyson Yates.

The HNAC coaches saw it by naming him the conference’s Player of the Year, and we see it as well. Yates is first up on our Top Ten athletes of the year in the InkFreeNews list for 2020-21.

In a season in which Groves raved about his team’s ability to continue to face adversity and improve throughout the year, the junior started all 26 games for the Trojans, helping keep the ship steady in a mode of consistency that ultimately Groves rewards in his program.

As one of the leaders of the team, both figuratively and literally, Yates finished first on the team (and wasn’t the point guard) in assists and second on the team in scoring and rebounding. All told, Yates averaged 13.3 points, 4.4 rebounds, 3.4 assists and 2.0 steals per game while helping Triton reach the regional finals. He shot over 59 percent from two-point range and over 71 percent from the free throw line, as well.

The junior was the Trojans leading scorer in 11 different games, including a team-high 19 in the regional final loss to the Kouts Mustangs. Yates also had a season-high 28 points in a HNAC win over Pioneer and eclipsed the 20-point threshold three times and led his team in rebounding on five different occasions.

The HNAC POY award was certainly earned. Yates seemed to turn it up a notch in those conference games where he upped his scoring to 16.4 points and improved in every other statistical category in the conference slate versus the rest of the regular season.
His season high of 28 points versus Pioneer was followed with 22 more versus Winamac and 20 versus North Judson in HNAC contests to lead the championship march that would conclude with a win at Knox in the last game of the regular season.

He joined classmate Ashton Oviedo on the First Team for the HNAC, and teammates Bruce Johnson, Cole McKinney and John Gardner were all named Honorable Mention as well.