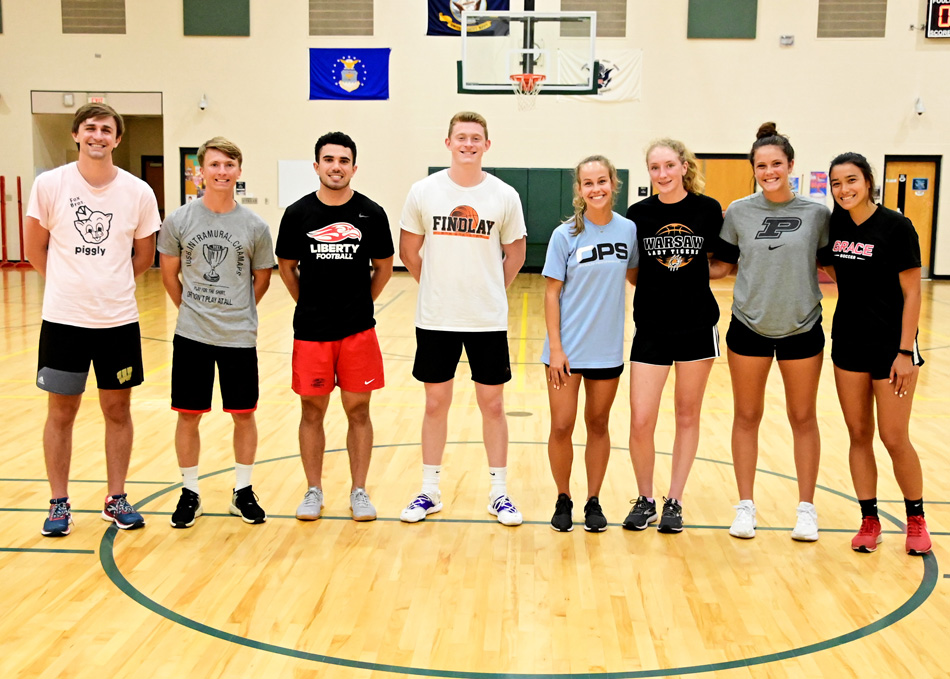 NORTH WEBSTER – It was muttered more than once Saturday morning at the Tournament of Champions, “At least Tommy isn’t here.”

The boys in the Shoop Sports Foundation competition were referring to perennial champion Tommy Hickerson, who dominated the TOC for years. Now out of the area, Hickerson wasn’t around for the competition, opening the door for someone else to grab the big check.

Jairus Boyer was the one to step forward and claim the big check, leading the way at the 2021 TOC at North Webster Elementary School. Boyer took first place among the male competitors, taking the $2,000 scholarship. The tournament, a scholarship event put on by the Shoop Sports Foundation, is a 10-event competition where athletes are tested in several different disciplines as points are accrued for first through fourth place totals. 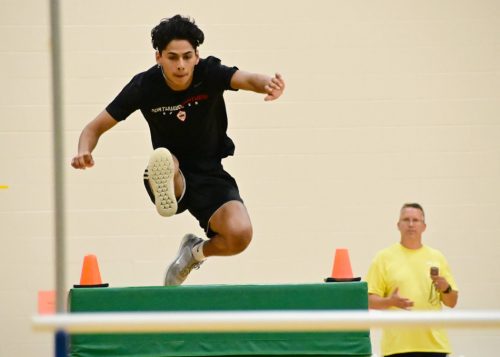 Sebastian Guillen leaps over the first obstacle in the obstacle course.

Boyer absolutely needed to come through as the last shooter in the three-point shootout, and scored eight points to tie Bryce Willard for second. Those points turned into $500 as Boyer passed Brady Willard for first place overall with 18.5 overall points to Brady’s 17. Boyer finished first place in the obstacle course, soccer course and football throw for four points each, then was second in the 40-yard dash and long jump along his winning performance.

“I’m very competitive and knowing just about everyone here is a college athlete, you really have to step up,” said Boyer, a Wawasee grad and current Taylor University product. “Little things like putting the blocks down or don’t knock over a cone, you have to pay attention to details.

“It’s fun to be among some of the guys who have won this before,” continued Boyer. “I competed against Tommy the first year I did this and he’s a freak. It’s an honor to say I walked away in first place, and blessed we have something like this that the Shoop Sports Foundation puts on for us. Very happy to be a part of this.”

Brady Willard pulled in $1,500 to take back to Liberty University, the Fairfield High School grad was tops in long jump and the 40, and was runner-up in the mile run and pull-ups among his work.

NorthWood grad Ben Vincent was third at 13.5, scoring points in seven of the 10 events, including the top mark in pull-ups taking runner-up in the obstacle course and shuttle run. His $1,000 will help counter costs at Cedarville University.

The race for fourth was tight, and came down to Eric Yankosky and Isaac Beatty. Yankosky scored in five events, but had big points in taking first in the shuttle run and second in both the long jump and the 40. eventually tallying 12 points. Beatty, a national champion distance running star for Grace College, opened the day easily conquering the mile, then hit the gym and tied Jaydon Boyer for first in free throws. But just a third in the obstacle course, which he led for over half the competition before Boyer and Vincent eventually trumped his time, left him short key points.

In the final three-point shootout, Beatty and Yankosky both finished outside the top four, leaving Beatty at 10.5 points and outside the money. Yankosky, who is working on becoming a nurse via IUSB’s program, gets $500 for what will likely be quite a hefty set of school tuition costs. 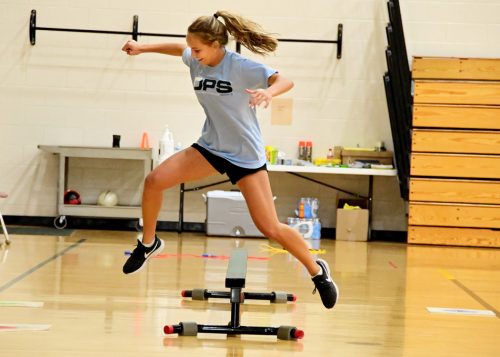 Moving to the girls competition, just five females were on hand Saturday, meaning four were going home with some money. Taking the big check was Warsaw graduate Kendall Wayne, who scored in all 10 events and was at least second in eight of them in running an impressive 32 points.

Wayne, who is leaving for Taylor University and a role with the women’s basketball program, was first in free throws, three-point shootout, shuttle run, the 40 dash and pull-ups.

“It was a cool experience, fun to go out and try a bunch of things I wouldn’t normally be doing,” Wayne said. “I’ve never done soccer like this before, so I was pushing myself mentally to stay focused and just try to do my best.”

Wayne’s Warsaw basketball teammate, Audrey Grimm, tied Purdue volleyball star Maddie Schermerhorn for second at 19 points and each earned $1,250 for their efforts. Schermerhorn won the softball throw and long jump while Grimm took honors in the mile and soccer course, fitting as she is headed to Taylor University on a soccer scholarship.

Fourth and $500 further was Grace College’s Tori Calizo, who scored in nine of the 10 events to score 17.5 points.

After not conducting the Tournament of Champions in 2020 due to the pandemic, event coordinator Mitch Willaman was happy to get things back to normal again.

“What a great group of kids, all I heard today were positive comments from them,” Willaman said. “They were definitely encouraging each other the entire way. You could see it in events where maybe they weren’t as good, they were pulling for each other. The parents, too, everything was really positive. Just a great day. Really happy to be back here doing this again after missing this last year.”