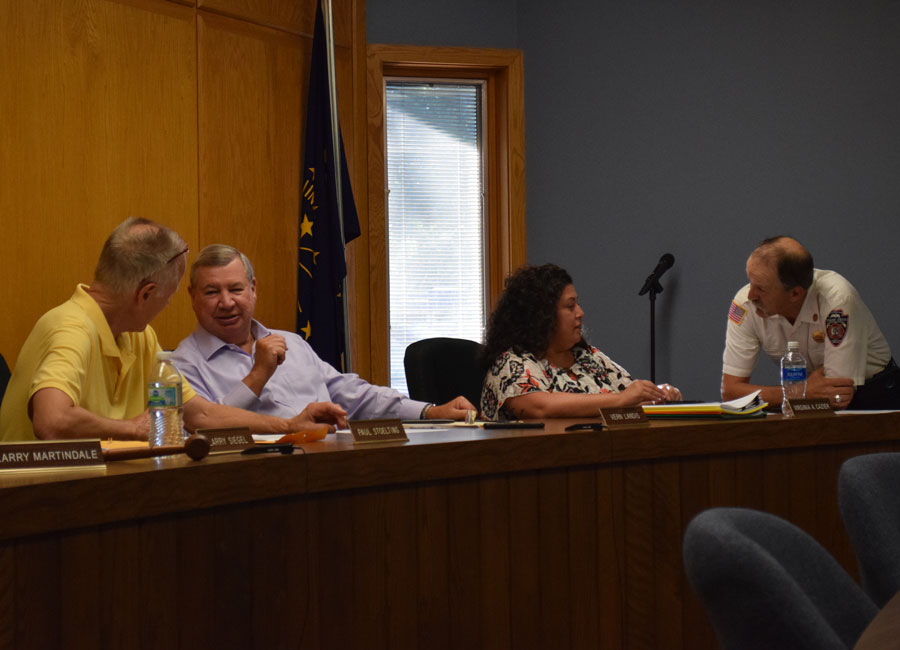 The council also approved designating the council president as the legal signer for the Town of Syracuse for Community Crossroads grants.

The council confirmed awarding the bid for the construction of the new ballpark to Beer and Slabaugh with Larry Siegel, council president, as the legal signee for the contract.

Jeremiah Mench was introduced to the council. He worked for the waste water treatment plant for 14 years and is now returning after being asked to come back. He will start sometime in late June, early July.

Mench needs to earn his Class II certification to become a foreman. He told the council with the 6 month probationary period, he should be able to accomplish getting his certification.

Jeremy Harding, Commonwealth Engineers, the town’s engineering firm, reported the state had funds available through a revolving loan program. He recommended applying for funds to paint the exterior of the north water tower and to do loop-in work on the Lakeside Drive waterline. Total cost for both projects would be around $900,000.

The application deadline for the grant is July 15 and if awarded the town’s share would be around $385,000. Siegel expressed concern about finding the $385,000. After some discussion the council approved going forward with the application process.

Harding also reported installing sewer at the new ballpark would cost around $175,000. Councilman Larry Martindale asked if permits would be needed for installing the sewer. Harding said yes, the contractor should take care of that. Harding asked for paperwork to be routed to him so he could review it and make sure it was in order.

The opening bid for roadwork at Main and Railroad Streets came in under budget. The engineering estimate was $307,923.23. Phend & Brown won the bid coming in at $250,823. Work on the project will probably begin sometime after Labor Day and be completed before asphalt season ends for the year.

Police Chief Jim Layne reported one of the two cars on order has come in while the department waits on the second one due to a back log.

An officer is leaving the department June 24 to join the Goshen Police Department. Applications are being taken for Tier 1 Trained candidates until June 30. If none are received, Layne will look at an open process for applications.

Councilman Tom Hoover asked if town ordinances allowed the town to fine homeowners for code violations. Layne explained the fine structure needs to be better defined and funds need to be made available so the town can pursue code violators in court if it needs too.

Siegel suggested notifying both the property owner and occupant when there is a code enforcement issue.

Chad Jonsson, park superintendent, reported the Mudtastic is scheduled for Saturday, June 19. So far close to 270 participants have registered and 300 are expected.

The Fourth of July will look like it did before the pandemic with the Lake Area Band playing in Lakeside Park, there will also be food trucks and more.

The parks and recreation department is looking to update Henry Ward Park. The boardwalk and fishing pier were recently redone. Jonsson told the council updating the playground and restrooms are future projects.

Siegel raised concerns about people swimming past the buoys chasing toys such as inflatables or balls that floated away. He said he’s seen instances where swimmers are nearly hit by boaters and asked if more buoys could be put out to better mark the swimming area. Jonsson said he would look into it.

Fire Chief Micky Scott noted a correction to the Fire Territory article that appeared in The Mail-Journal. The K21 Foundation gave the Turkey Creek Fire Territory $168,149 for new 800 hertz radios. The department will pay $42,035. The numbers were backwards in the earlier report.

Scott explained the difference in the type of radios the department uses now to the new ones as comparing an analog flip phone to a digital smart phone.

The department’s annual barbecue will be held July 3.

Virginia Cazier, clerk-treasurer, reported the air conditioning in her office is not working. She is getting quotes and suggested both the unit at her end of town hall and the unit for the police department be replaced.