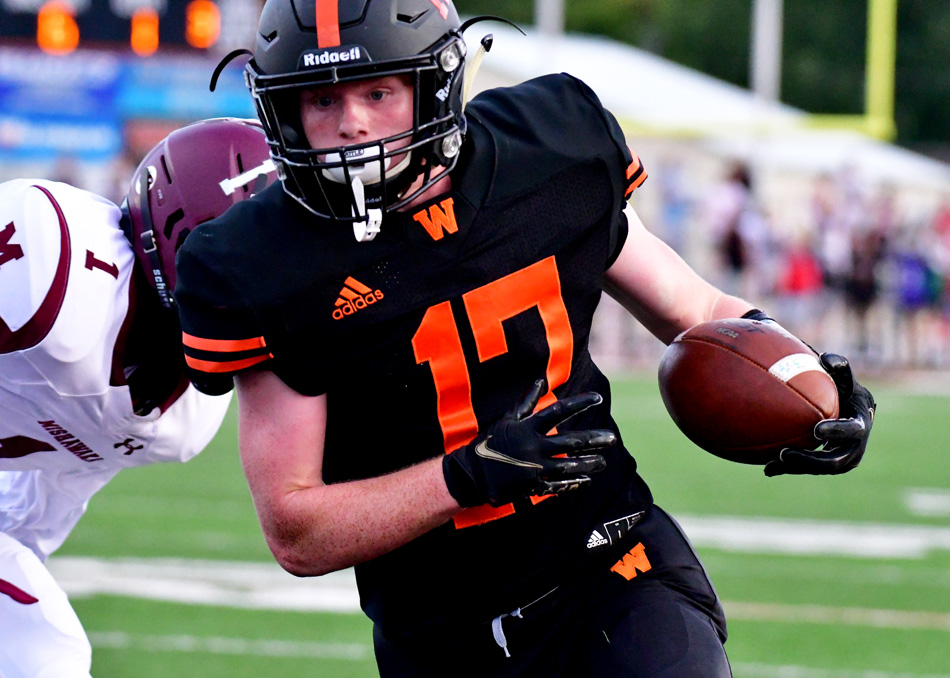 A rematch of 2020 NLC co-champs Warsaw and Mishawaka will take place in week six in 2022 as part of a new realignment announced by the league on Wednesday. InkFreeNews file photo by Mike Deak

DUNLAP – The Northern Lakes Conference has voted to begin a rotating football schedule beginning in the Fall 2022. The current schedule will remain in place for the 2021 season.

In order to make this work, one week throughout the series (through 2033) had to have an opponent that was always in the same slot. That opponent has to be someone on the opposite side of the even / odd home split. Week nine was chosen because it ensures that a week nine opponent was also not a potential first-round sectional opponent.

“I think it’s a nice change up to a schedule that has been set in place for a long time ,” said Wawasee football head coach Jon Reutebuch. “Avoiding playing teams twice in a row, last regular season game and sectional first round was important. It will be fun to see different teams at different times of the year. I feel it only adds to the competitive balance with respect to all schools in regards to home games.”

The schedule works in two-year increments starting in 2022 (home and home with each other conference team for two years). Then it shifts in the following way.

This establishes a truly rotating schedule that for the duration of the format, each team plays every other team in every available week of the conference season (weeks 3-8).

“There has been discussion of this type of change for many years, but a number of obstacles prevented the change. The NLC football coaches worked together to formulate a plan that addressed the obstacles,” said Dave Preheim, Concord High School Athletic Director and NLC Football Chairperson.

“One of the big strengths of this plan is that it ensures teams have an equal distribution of home and away games throughout the season. No coach or athletic director would be excited about being away four of the first five weeks. This plan keeps that from happening. Additionally, it prevents the potential for teams to have play each other in week nine and then again in the first round of the sectional. The football coaches should be commended for their efforts to seek viable solutions to the previous problems. With a few changes when teams have joined or left the conference, the schedule has been the same for at least 35 years. We think this will be a positive for our teams, coaches, and fans in the years to come.”

Warsaw will open next season with a home game with Plymouth, then follow on the road at Concord and NorthWood, host Mishawaka, at Wawasee, home with Goshen and at Northridge to conclude the regular season

Wawasee will open with a home game with Goshen, then follow at Plymouth, versus Concord, at Northridge, versus Warsaw, at NorthWood and hosting Mishawaka the final week of the regular season.

NorthWood will host Concord then visit Northridge, followed by a home game with Warsaw, two road games at Plymouth and Mishawaka, then host Wawasee and Goshen to conclude the regular season.