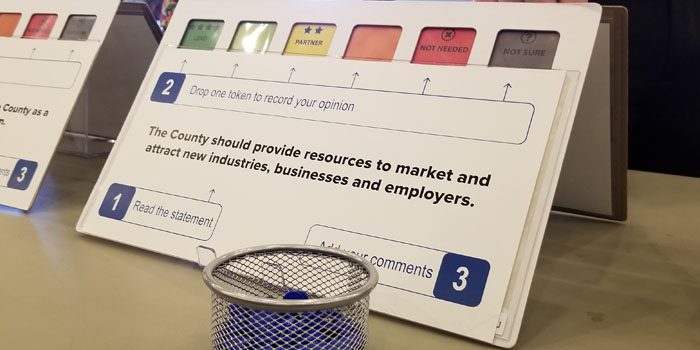 One of numerous questions was posed for visitors to consider during a meeting at Creighton’s Crazy Egg Restaurant in Warsaw Thursday night. InkFreeNews photo by Dan Spalding.

WARSAW – Kosciusko County’s ongoing steps toward adopting a new comprehensive plan look far different than the last time officials made such an endeavor 25 years ago.

In 1996, when county leaders last approved a comprehensive planning document for the county, they did it “in-house” and without the benefit of the Internet.

This time around, the county is using a consultant (paid with grant money) and has the support of Kosciusko County Community Foundation and K21 Health Foundation.

Two years ago, the foundation hosted a series of “chats” in various towns seeking input on what people see as their priorities and concerns when it comes to planning for continued growth.

Some of those results are now being highlighted in another series of meetings that began Thursday with an event at Creighton’s Crazy Egg restaurant.

The open house format allows the public a chance to view some of the findings and provide more input through a series of questions. Surveys are also available online at ForwardKosciusko.com.

In addition to an overall county plan, officials are seeking specific input about plans in Warsaw and 12 other communities.

Turnout Thursday was light, but still better than a public meeting 25 years ago that was held in western Kosciusko County that only saw one person show up.

“I’m hoping we might get more when we stretch out to the south and to the north, but this is good. This is what you have to have. It’s a great thing for Kosciusko County and it’s only going to help,” Richard said.

By next March, the consultants will provide recommendations on growth, development, infrastructure, and quality of life aspects.

The final report will also include a capital improvements plan that looks at roads, bridges and utility infrastructure.

That plan, she said, will not address the fledgling US 30 reconstruction project that would stretch across northern Indiana, including Warsaw.

According to preliminary information from the survey, residents are saying quality Internet service is a top concern.

The need for improved broadband isn’t a secret, but the results confirm how important it is.

“It’s really become the utility that people rely on, just like water and sewer,” Clark said. 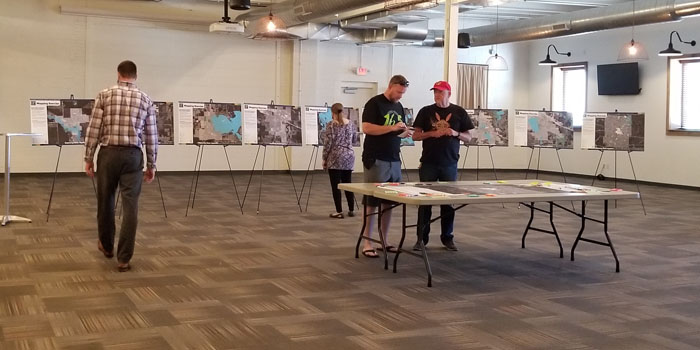 Here is a chart featured Thursday that looks at projected population growth in Warsaw and communities in Kosciusko County.