On Thursday, June 3, James M. Smith, an Army veteran with 16 years of experience in law enforcement, announced his intention to seek the Republican nomination for the office of Kosciusko County Sheriff in the May 2022 primary election. 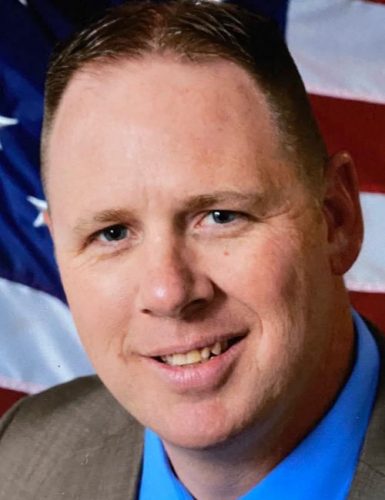 In announcing his candidacy, Smith said that he intends to bring a “common sense approach” to the office, emphasizing the need for “effective law enforcement with a fiscally conservative mindset.”

A lifelong resident of Kosciusko County, Smith graduated from Warsaw High School in 2000. He joined the U.S. Army Reserves, where he served for 12 years, including a nine-month tour in Kuwait and Iraq during Operation Iraqi Freedom in 2003.

He served as a reserve officer for the Syracuse Police Department from 2005 to 2007 and then as a full-time officer for that department until 2011, graduating from the Indiana Law Enforcement Academy in 2008.

In 2011, Smith began service as a deputy for the Kosciusko County Sheriff’s Office, where he continues to serve today.

Smith is a certified hostage negotiator, a certified field training officer, and a certified Indiana Law Enforcement Academy instructor for S.T.O.P.S. (Strategies & Tactics of Patrol Stops), a survival course designed to train officers to safely conduct high-risk tactical traffic stops, and E.V.O. (emergency vehicle operations). He formerly served as the Kosciusko County Reserve Coordinator and is currently a member of the Rescue and Recovery Dive Team.

Outside of law enforcement, Smith’s community involvement includes membership in the North Webster-Tippecanoe Township Chamber of Commerce, the Leesburg Lions Club, and the Fraternal Order of Police Lodge #149, in each of which he served a term as president or vice president. He is also a member of the Warsaw Morning Breakfast Optimist Club, where he serves on the organization’s board, the North Webster American Legion Post #253, and the Kosciusko County 4-H Swine Committee. He attends the Warsaw Community Church and the Clunette Methodist Church.

Dukes, also a Republican, is in his first term as sheriff. He has not announced his intentions for re-election.

Smith resides in Warsaw with his wife, Trish. They have two children:  Zachary, 18; and Isabelle, 16.

The end of his statement included the following phrase: “More Service, Less Politics.”