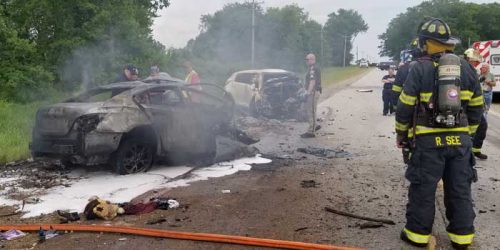 The front ends of both vehicles were obliterated in the crash. InkFreeNews photo by Dan Spalding.

PIERCETON – Andrew Jewell knew exactly what happened when he saw a huge plume of black smoke as he headed home on Old Road 30 Thursday afternoon, May 27.

Minutes earlier, Jewell, of Wolcottville, said he and another motorist were forced off the road by a car traveling eastbound on Old Road 30 and speeding upward of 90 mph.

Jewell called 911 to report the reckless driver after he saw two more vehicles forced off the road by the car.

He then saw billowing smoke ahead – and after cresting over a hill – found the remnants of a fiery two-car collision.

The vehicles appeared to collide head-on and the car that had been speeding was on fire.

Two people in the other car, a white Kia Sportage, died at the scene, which was about a mile east of SR 13.

Officials were unsure how many people were in the car that caught fire.

Jewell was one of the first motorists to arrive and tried to use a fire extinguisher to put out the blaze.

The crash was reported around 4 p.m. 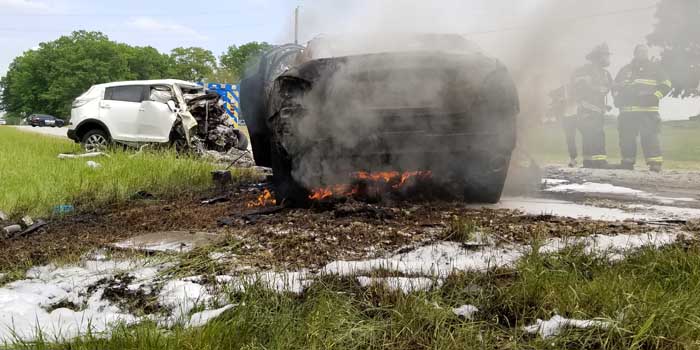 One of the two cars caught fire after impact along Old Road 30 East north of Pierceton. InkFreeNews photo by Dan Spalding.