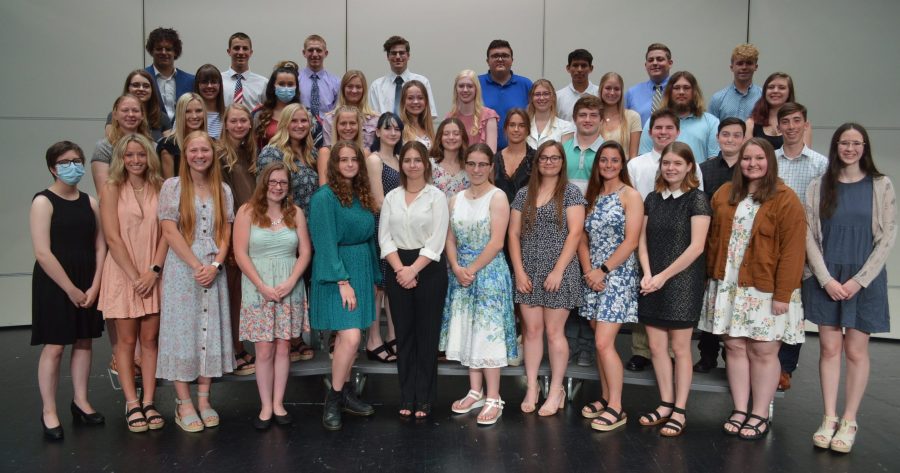 SYRACUSE — When visitors come through the main entrance of Wawasee High School soon they will notice several group photos displayed on the walls. Those inducted into the school’s Academic Hall of Fame are remembered for years to come.

On Sunday afternoon, May 23, in the high school auditorium a total of 49 more students were inducted for the class of 2021. They will eventually join previous inductees in having a photo displayed.

This year’s induction ceremony was different than those of past years. Because of the uncertainty due to the coronavirus when or if the banquet would be held was in doubt and it was rescheduled twice. No food was served this year and several of the students inducted made videos in which they named and thanked the teacher who they chose as having the most influence on them.

Geoff Walmer, WHS principal, noted the food portion of the banquet is dependent on fundraising and “I just didn’t feel right asking businesses for donations after what they have been through the past year.”

WHS Teacher Jeff Phillips gave the opening remarks and said parents should be recognized for what they do to help students succeed academically. He also said it is an honor for a teacher to be selected as having the most influence on a student and “that’s a situation we don’t take lightly.”

To be eligible for the Academic Hall of Fame, a student must have a cumulative grade point average of at least 10.0 on a 12 point scale by the end of their 11th trimester.

In closing remarks, Walmer said the 49 students “stepped up to the plate and hit not just a home run, but a grand slam or whatever is beyond that.”

He encouraged the students to “do the right thing” and make the right choices based on the information they have at the time. Mistakes will be made, but they can be overcome.

“When mistakes are made and you knew it was the wrong decision, those are the ones that will jump up and bite you,” he said.

Following are the students inducted with the names of their parents, college choice, major, future plans if any and the educator they chose as having the most influence.