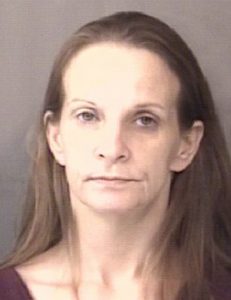 PIERCETON — A Pierceton woman was recently arrested for animal cruelty after officers discovered a dog on her property had a steel cable wrapped around its leg.

Elaina Rochelle Howard, 41, 791 N. SR 13, Pierceton, is charged with cruelty to an animal, a class A misdemeanor.

On April 2, a Kosciusko County Sheriff’s officer went to a location regarding an eviction notice. The officer made contact with Howard, the property’s occupant, at the scene.

While at the property, the officer noticed a dog outside of the house. The dog did not have a shelter and was unable to stand.

According to court documents, the dog had a steel cable wrapped around its rear leg several times. The steel cable was embedded around the dog’s leg and the leg was swollen.

When the Kosciusko County Sheriff’s officer and Pierceton Police officers pointed out the dog’s condition to Howard, she said that “it wasn’t too bad.” Officers were able to cut the cable off of the dog’s leg. However, the dog was still unable to walk.

This same dog was at a neighbor’s property on March 12 and was trying to attack chickens. A Kosciusko County Sheriff’s officer responded to that incident and issued Howard a citation for the unrestrained dog. That same day, the dog was taken to the AWL.

The shelter’s records show that Howard picked the dog up that same day.

Howard was booked in the Kosciusko County Jail for this case on May 21.