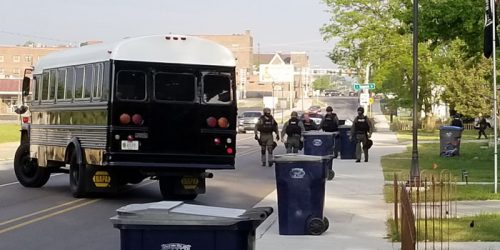 Part of East Market Street was closed off and police were seen shortly before 8 a.m. The incident was in the 600 block. InkFreeNews photo by Dan Spalding. 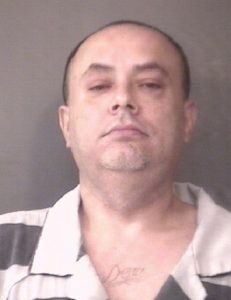 WARSAW — One person was arrested on Monday after Warsaw Police’s Emergency Response Team responded to a report of a man refusing to comply with law enforcement.

Around 1:12 a.m. Monday, May 24, Warsaw patrol officers were called to the 700 block of East Center Street for a possible domestic disturbance based on screaming in the area.

Continued investigation led officers to 615 E. Market St. A man yelling at the rear of the residence was seen going back into the home. Officers noticed the man moving around inside the residence; however, he did not respond to investigating officers and appeared to shield himself in a back room.

A short time later, another man approached officers and explained that he had been staying inside of 615 E. Market St., where he was house-sitting for a relative. He informed them he was kicked out by Tamez after an argument ensued.

It was discovered that Tamez had an active felony warrant and an active protection order against him from the residence’s owner, who was found to be at another residence at the time.

Officers made a positive identification of Tamez as the person inside the residence refusing to comply with law enforcement. His active felony warrant was confirmed.

A search warrant was written and authorized. Based on circumstances surrounding this case and prior history, the Warsaw Police Emergency Response Team was activated and sent to the scene. Officers breached the residence and took Tamez into custody without any further incident or injuries.

After the execution of the search warrant for Tamez, additional evidence presented itself, requiring another request for a search warrant. That paperwork was also authorized, and drug/narcotic evidence was recovered inside of 615 E. Market St. That portion of the investigation is still ongoing.

Tamez was taken to the Kosciusko County Jail, where he was booked in for his active felony warrant for bond revocation, along with new charges of invasion of privacy and resisting law enforcement.

Warsaw Police were assisted by Lutheran EMS as a stand-by for ERT operations.