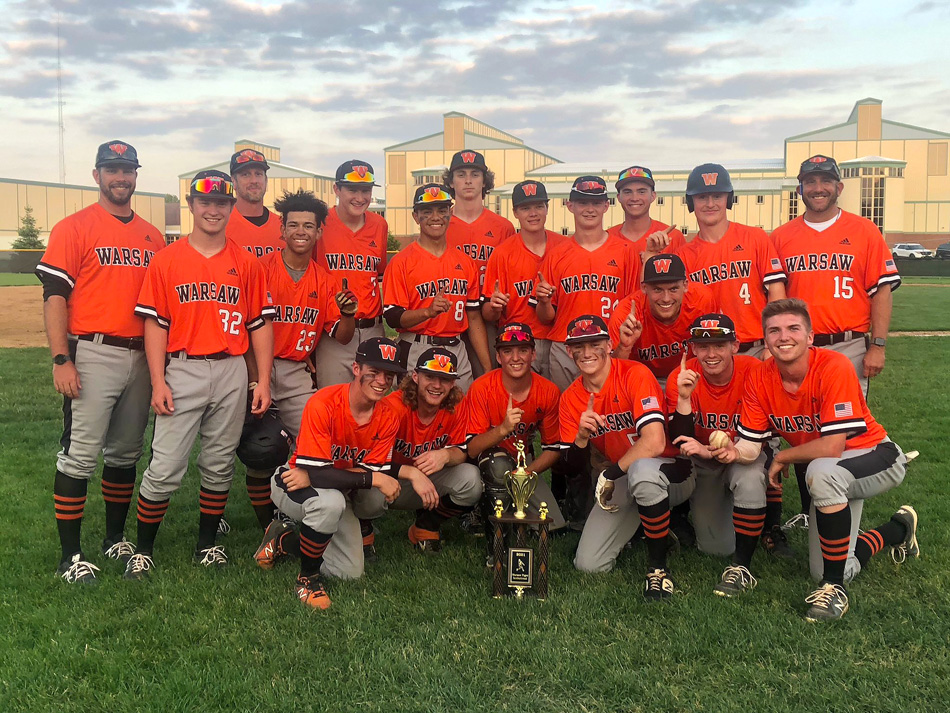 Warsaw beat DeKalb and Penn to claim the title at its home tournament on Saturday. Photo courtesy the Warsaw Athletics Twitter

Warsaw grabbed a pair of quality wins Saturday in its home tournament.

Against the Barons, the Tigers piled up 12 hits to keep the pressure on. Joey Springer, Sam Justice, Aaron Greene and Drew McCleary all had two hits, and McCleary and Nico Luna both drove in two, three of the four RBI came in the fifth when Warsaw broke open what was a 3-2 game at the time.

Springer scattered six hits in the complete game win, not walking a DeKalb batter in the semi-final.

Warsaw won its tournament title by rallying past the Kingsmen.

Penn led 8-3 after hanging a six-spot on the board in the fifth, Jason Migas with a two-run single in the frame. Ryan Buckley homered earlier in the game.

Khareus Miller led off the bottom of the eighth with a walk, and came around to score on a pair of Penn errors to give the Tigers (13-12) the title.

Greene, who was named the tournament’s MVP, also scored two runs in the championship game. He was on the hook for the loss after allowing nine hits and eight runs into the fifth, but had Justice, Kyle Showley and Miller work 3.2 innings of scoreless relief. Miller got the win, working the eighth on the hill.

In the sectional preview between the two teams next week, Lakeland patched together an improbable rally to sting the Warriors in LaGrange.

In a game that featured 12 extra base hits and 31 hits in all, Lakeland had seven of them, including homers from Dylan Stump and Cole Schiffli. The Lakers trailed 14-7 after Wawasee scored three runs in the sixth, but responded with six runs in the bottom of the sixth, one in the seventh and walked off in the eighth.

Blake Sturdivant got the win for Lakeland, pitching 2.1 innings of scoreless relief.

The game also saw every starter collect at least one hit and all but one player scored at least one run. Grant Brooks had a homer among his three hits and drove in four. Five other Warriors (15-12) had two hits. Kam Salazar took the loss, pitching the eighth.

The Trojans won both ends of a doubleheader Saturday in visiting the Dragons.

In game one, Triton had two hits each from Dominic Smith and Luke Kaufman, the two combining for three RBI. Jeremiah Farrell had two RBI, and struck out 10 Dragons in his pitching performance that yielded a win.

In game two, the Trojans (4-17) had two RBI each from Smith, Nate Amsden, Evan Briles and Jacob Pitney and Brayden Cunningham scored two runs. Pitney got the pitching win in relief.

Valley (12-11) lost both of its games at Saturday’s Twin Lakes Invite.

Stats for the games were not immediately provided.

Wawasee (12-7-2) hosted its home JV tournament, and beat the Eagles and Apaches.

Josh Patterson and Jay Duncan each had three hits and combined for three runs scored in the Busco win. Cole Turner struck out four for the pitching win.

Zach Griffith had the game-winning, walk-off double to put Wawasee over on Wabash. Griffith had four hits and two runs scored. Gavin Malone added a double and four RBI for the Warriors.

Warsaw concluded its regular season 3-3 in its final week after losing Saturday at Manchester.

The duo of Avery Isley and Brittnay Evans held Warsaw in check, allowing just three hits and one walk in the regular season finale for the two clubs.

Lindsey Bradley had the lone RBI for the Tigers (17-8), which played six games in its final week. Tori Tackett worked all seven innings once again, who completed 24 of the 25 regular season contests. Tackett gave up six hits and struck out four.

Isley had two hits and two RBI for the Squires.