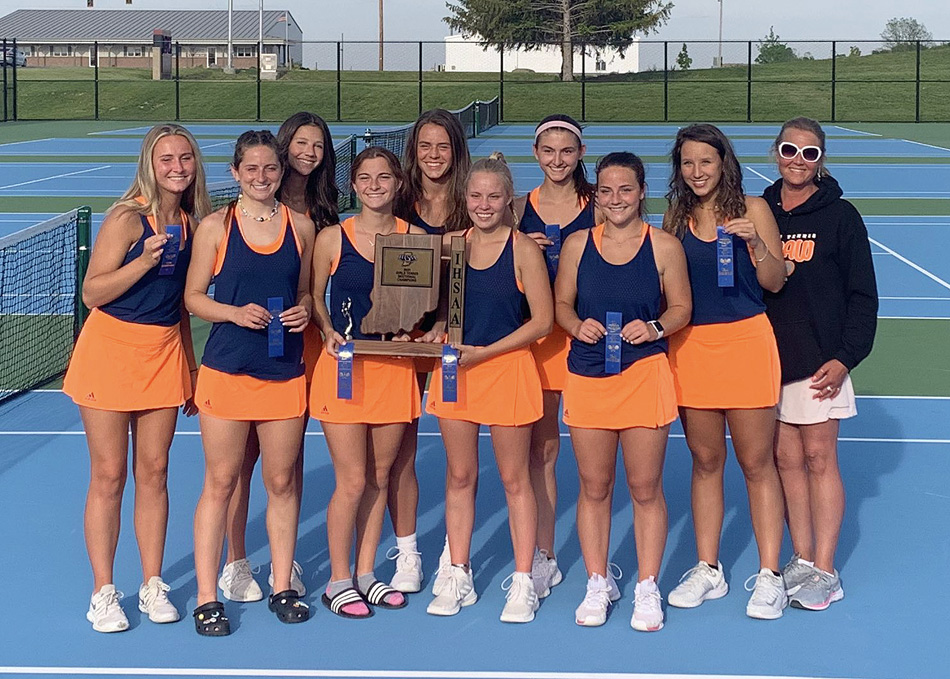 It’s an even 20 now for the Warsaw girls tennis team, as in 20 championships in a row after edging the Eagles in Columbia City.

Warsaw made due with a pair of straight set winners from both of its doubles teams, along with Megan Mishler at No. 3 singles. Peri Britton and Marie Frazzetta put out Mollie McCoy and Anna Schrader quickly at No. 1, 6-1, 6-1, and Anna Brehany and Kennedy Wiedeman won a slugfest with Noelani Stahl and Ashleigh Hoskins 7-5, 6-4. Mishler also had to work, but found a way to knock out Madison Miner 7-5, 6-2.

The championship gives Warsaw 30 in its illustrious girls tennis history, and moves the Tigers to the Plymouth Regional semi-finals on Tuesday, where it will face Bremen. Culver Academy and Peru will meet in the other semi-final.

In the other area sectional involving local teams, Bremen ended a five-year title run by Plymouth with a championship on its home DeSantis Courts.

Bremen’s last title in 2014 ruined Plymouth’s reign, and in 2021, the Lions did it again by winning both doubles courts and at three singles.

Katie Barnes knocked out Bella Kain quickly 6-1, 6-0, and the No. 2 team of Emilee Taylor and Sylvia Meyer got past Annie Plothow and Cassidy Riddle 6-4, 6-0. The clincher came in exciting fashion as Courtney Lawmaster and Grace Meyer won a pair of extended sets, taking the cake 7-5, 7-6 (6) over Taylor Delp and Ellie Jones.

Miranda German kept her season alive for Plymouth, winning No. 1 singles over Kelsey Lawmaster 6-1, 6-0, and Aubrey Vervynckt did her part with a 6-1, 6-2 win over Chloe Miller.

The title is the 11th in Bremen’s history.