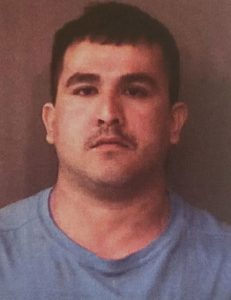 WARSAW — A Warsaw man was sentenced to 35 years in prison after molesting a child more than 20 times.

Jose Luis Izaguirre, 32, Warsaw, was initially charged with three counts of child molesting, all level 1 felonies. During a three-day jury trial in April, Izaguirre was found guilty on two of the charges.

Izaguirre was sentenced in Kosciusko Circuit Court on Thursday, May 20. He did not give any type of statement during court proceedings. A translator worked alongside Izaguirre to interpret what was said in court.

According to court documents, on March 29, 2019, a Child Protective Services caseworker received information that Izaguirre was having sexual intercourse with a child.

The child told the caseworker that Izaguirre began inappropriately touching them at the age of seven. The interactions turned into sexual intercourse two years later. The child said they would tell Izaguirre no but that he would hold them down and yell. They also said Izaguirre made them watch pornographic videos.

The child said the molestations continued about two times a month until February 2019.

A Warsaw Police officer spoke with Izaguirre about the allegations. Court documents state Izaguirre admitted to sexually touching and molesting the child more than 20 times. He also admitted to watching pornographic videos with them.

During court proceedings, Deputy Prosecuting Attorney Joseph Sobek called the child’s mother for testimony. She elaborated on how her child being molested has affected her family emotionally, physically and mentally.

“It’s affected everything,” said the child’s mother. “I’ve dealt with a lot of things a mother never should.”

The child also gave an emotional victim impact statement in court, asking Izaguirre to maintain eye contact with them during their testimony.

The child said when people ask them about being molested, they usually hear comments on how they’re now a much stronger person.

“I was a child, I didn’t need to be stronger,” said the child. “You don’t understand how hard it was to be here (for the trial.)”

Sobek listed several aggravators for the court to consider for sentencing, including the amount of damage caused, the child’s age at the time of the incidents and Izaguirre’s lack of remorse. He said Izaguirre having no criminal history is the single mitigator but that due to the aggravators, he is considered high-risk to reoffend.

“This crime itself was extremely brutal,” said Sobek.

Defense Attorney Jay Rigdon argued that Izaguirre has not shown remorse because he entered a not guilty plea and that that cannot be used as reasoning.

For the second child molesting count, Kosciusko Circuit Court Judge Michael Reed sentenced Izaguirre to 40 years in the Indiana Department of Corrections. Izaguirre was sentenced to 30 years in DoC for the third count. Five years of the sentence was suspended on probation. Both counts will be served concurrently, or at the same time. In total, Izaguirre received a 35-year prison sentence.

Per Indiana Code 35-31.5-2-72, Izaguirre is considered a credit restricted felon. This applies to a person who has been convicted of child molesting involving sexual intercourse for a crime committed before July 1, 2014; or other sexual conduct for a crime committed after June 30, 2014, if the offense is committed by someone at least 21 years of age and if the victim is less than 12 years of age. For every six days Izaguirre serves for his sentence, he will receive one credit day.

“The aggravators clearly outweigh the one mitigator,” said Judge Reed. “This was a plan perpetrated over years. He failed to take remorse for the actions he was convicted on.”

Izaguirre has 783 days of jail time credit in this case, plus good time credit as calculated. He is also subject to sex offender rules and must register as a sex offender.

Izaguirre said he intends to pursue an appeal regarding the court’s sentence.