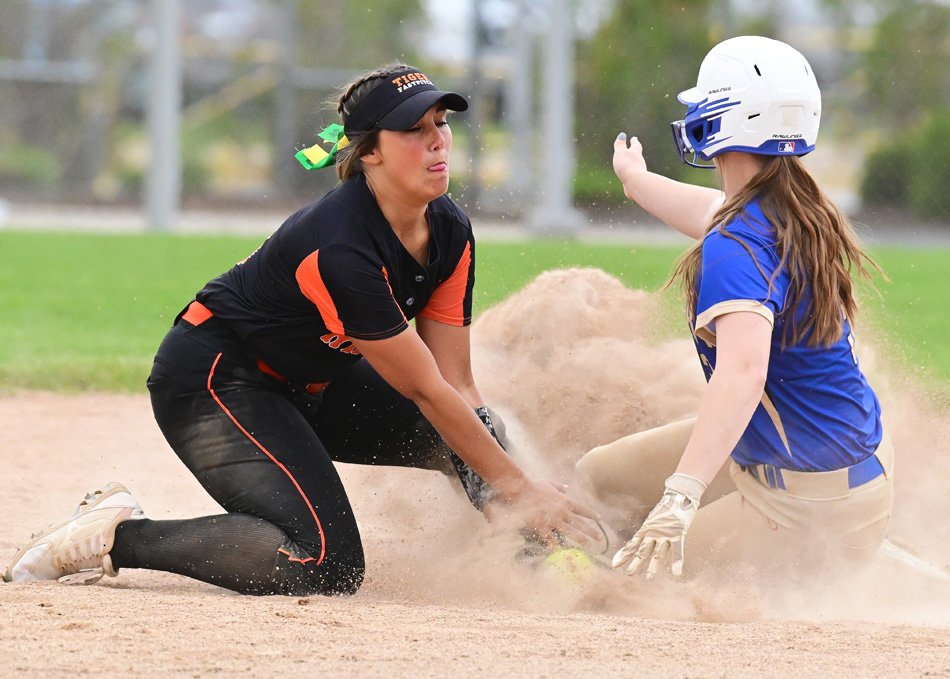 Warsaw’s Lindsey Bradley tags out Leeah Wade on a stolen base attempt during play Tuesday at Warsaw. InkFreeNews photo by Mike Deak

Valley returned to the field for the first time since its teammate lost his life, and perhaps did him proud Monday evening in Bunker Hill.

Valley (11-7) scored three runs in the first, another in the second and seven more in the third to overwhelm Maconaquah, playing in the honor of Brendyn Stump, who passed away Monday.

Stats for the game were not provided. Valley plays at home Wednesday against No. 1 Southwood.

An eight-run fifth was the only inning the Falcons struck, but it was enough to get the non-conference win in Syracuse.

The Falcons had three hits and three RBI from Michael Slabaugh and an RBI double from Owen Miller.

Parker Young and Colt Dolsen each had two hits and an RBI for the Warriors (13-11), which also had a hit and stolen base from Ty Brooks.

Valley recovered from a tough Monday to claim an emotional win Tuesday evening.

Brayden Baney and Corinna Stiles each doubled and tripled, Stiles adding two RBI. Mercedes Snapp added two hits and an RBI and Abby Bowers had a triple and run scored.

Bowers got the win for the Vikings (11-13), pitching the complete game and striking out seven.

Emma Sweeney had a solo homer for the Eagles.

Once Elkhart got the wheels moving, there was no stopping the Lions in Tiger Town.

A 3-1 Elkhart lead into the fifth got much bigger with a six-run fifth, then after a run in sixth, scored five more in the seventh.

Wade had 10 strikeouts in the circle for the Lions, Tori Tackett punching out eight of her own for the Tigers (15-6), but allowing eight hits and nine runs in five innings.