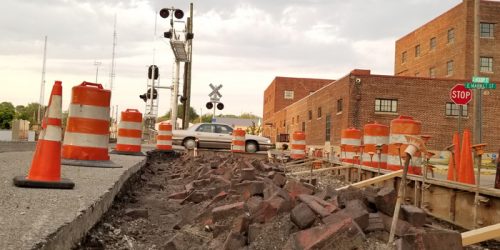 WARSAW – The slow pace of construction and the current lack of synchronized signalization of traffic lights at some newly updated intersections is frustrating Warsaw city officials.

The massive multi-million project coordinated by the Indiana Department of Transportation and Norfolk Southern should have been finished last year, but might not be complete for another six months, according to Jeremy Skinner, the city director of community and economic development who addressed the issue Monday night, May 17, at a city council meeting.

The multi-faceted improvements include a redesign of Hickory Street which runs parallel to the north-south railroad tracks used by Norfolk Southern in an effort to limit parking near the tracks and improve safety.

It also involves the installation of a series of new traffic signals on a handful of intersections along North Detroit Street, just west of the tracks to provide better traffic flow that will coordinate and accommodate train traffic passing through the downtown.

The new signals were added along Hickory to keep westbound motorists from being stranded on the tracks when trains are passing. The new controls have left many motorists befuddled since traffic lights for North Detroit are just a few yards away.

Sensors that are part of the signalization have already been installed under the pavement.

Mayor Joe Thallemer said recently that signalization would be synched after INDOT completed new paving along North Detroit Street, but officials recently learned the signals will not be updated until the entire project is completed.

That didn’t settle with numerous officials.

To a great degree, he said, the city is at the mercy of INDOT.

Councilwoman Cindy Dobbins, who often speaks on behalf of downtown merchants, said the problems are hurting business in the downtown and she believes some people are boycotting the downtown because of slow traffic.

Dobbins said it took her 14 minutes to travel from Center Street near Park Avenue to her store on North Buffalo Street. Some of that was due to a train, but the problems are being made worse by the lack of synchronization.

She said she was told that traffic on Smth Street has become heavier, likely by motorists trying to avoid the congestion.

Dobbins said she thinks the new set of traffic signals should not have been activated until the project was complete.

Skinner said he’s been in contact with INDOT officials expressing their concerns. Most recently, INDOT said the final synching of traffic lights will not be done until everything is complete.

“I would agree with you and probably a lot of the community that has reached out to us that the timing is not working. It’s something they need to work on. I’m sure they know that. The sooner the better for us. I don’t know what the hold up on their end is,” Skinner told council members.

The genesis of the project began in 2013, Thallemer said.

Skinner said INDOT contacted the city last week saying they wanted to alter the plan. He said the city is not interested in a new plan, but apparently, Norfolk Southern claims they never saw the plan.

The northern part of Hickory has newly defined parking areas, new curbs, and some trees. Work on the southern part of the road is still far from being complete.

A spokesperson for INDOT said Tuesday morning that signals are already synchronized, but will become more efficient when more “detection” is in place. However, the railroad has yet to do some work.

INDOT will continue to work with the city to improve operations in the area, he said.

Work on Hickory Street will be done during the second week in June, he said.

The SR 15 paving project, which started on Fort Wayne Street, will continue all the way south to SR 14. That will conclude sometime in October, he said.

Construction on the north half of Hickory Street appears to be close to completion. InkFreeNews photo by Dan Spalding. 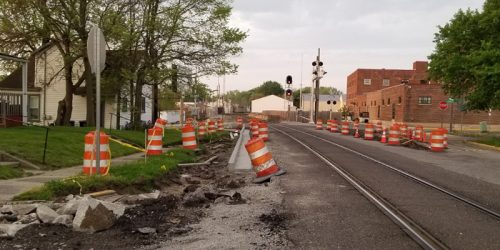 The southern portion of Hickory is still far from complete. InkFreeNews photo by Dan Spalding.