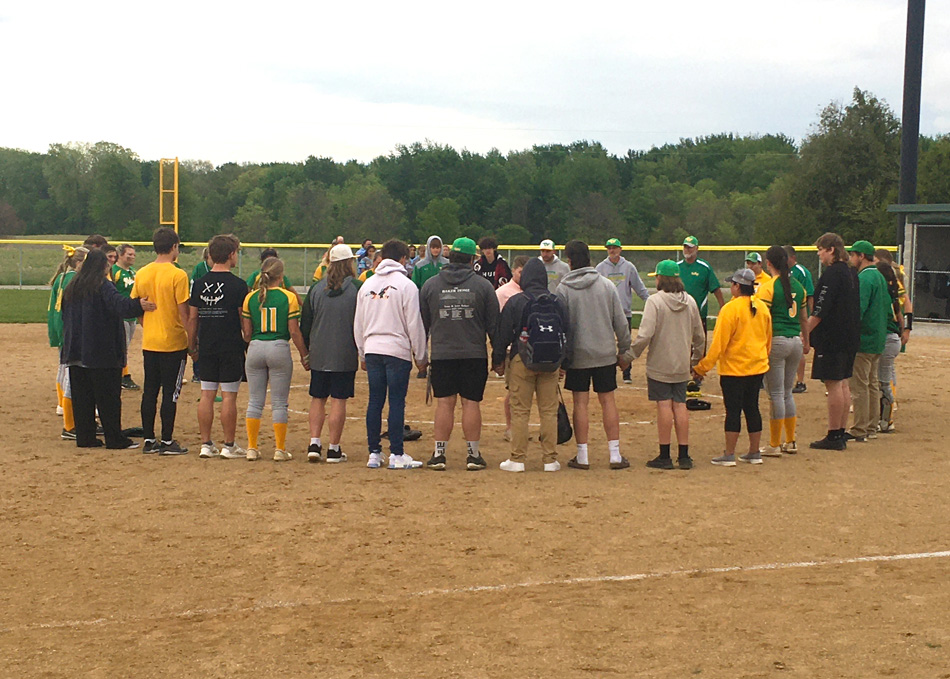 Valley softball and baseball programs gathered on the softball diamond Monday in a moment of prayer following the news that its classmate, Brendyn Stump, had passed away. InkFreeNews photos by Mike Deak

AKRON – Monday afternoon was supposed to be another day like any other. It likely will become one many in the Valley community won’t soon forget.

The girls tennis and softball teams were both on campus Monday, preparing to play conference games, tennis getting in a Three Rivers Conference dual with Northfield while softball squared off with Maconaquah. Baseball was postponed to Tuesday after the weekend’s news that its teammate and classmate, Brendyn Stump, was in an automobile accident and was fighting for his life in an Allen County hospital.

The team was still around, as were some stragglers from track after its practice ahead of sectionals this week. Kids were playing spikeball both in the outfield of the baseball field and at midfield of Bibler-Shriver Memorial Field.

At 4:48 p.m. Monday, Stump passed away from the injuries he suffered from the one-car accident on Saturday. He had just played in a doubleheader with the Valley baseball team, and was said to have been preparing to play in an AAU basketball tournament when his car left the road on SR 14 and hit a utility pole.

It wasn’t more than 10 minutes later that Rick Shepherd left a group of track athletes near the discus area just beyond right field, hopped in his patrol vehicle and drove to a closer parking spot near the baseball stadium entrance. It was in those moments that life got very real for the Valley baseball program, and the community as a whole.

Shepherd and the baseball coaches, including head coach Jarred Littlejohn, motioned over a dozen or so players and told them the news.

“Brendyn was a big part of our team, and like everyone down here, he’s family,” offered Littlejohn. “We know he’s not replaceable, but we also know he wouldn’t want us to quit on his behalf. We’ll play (Tuesday, at Maconaquah), we’ll play in his honor. It’s hard right now, but it will be good for our guys to get out and play.” 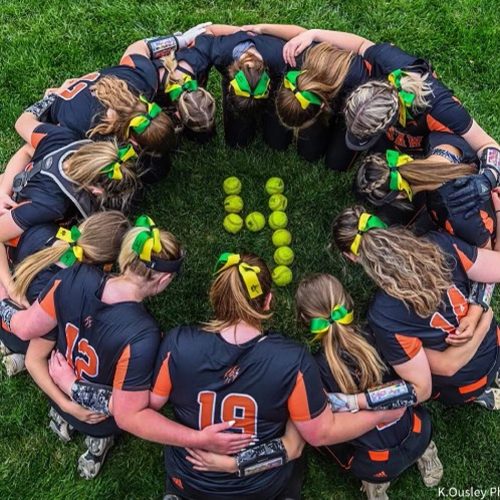 Warsaw softball showed its support for their Valley neighbors with a moment of prayer before its game Monday against Concord. Photo courtesy Kerry Ousley

As word slowly worked its way east from the diamond to the tennis courts, the baseball players who didn’t stick around at the field worked to the tennis bleachers. Many were sunk into hoodies, comforted by girlfriends or classmates, a handful on their phones texting between heavy breaths and tears.

The tennis team was unaware of what was happening as its first sets were underway with Northfield. Their match was paused, though, as softball PA announcer Drew Thompson read a brief note about Stump and asked for a moment of silence, but didn’t tip the news as Valley’s administration didn’t want the athletes to hear of the news during their games. So tennis continued back to play unaware, soon to fall 3-2 to the Norse.

Valley split its doubles courts, Kaitlin Neese and Mackenzie Costello winning two and four to keep its string of success going. Hannah Engstrand was last on the court, going the distance to win 3-6, 7-5, 7-6 (7-3) in a match she had to rally from down 5-4 in the second set to force the third set.

While tennis coach Andrew Luce was aware of the situation from the weekend, he didn’t immediately know Stump had passed. He was as shocked as anyone. “The girls knew the situation coming into tonight’s match. We decided to just play for him, stay focused in the moment, and work through it,” said Luce, then learning of the passing. “It’s a shame he wasn’t able to pull through. He was a great kid. I’ll talk with my girls more about this tomorrow.”

Softball had also ventured into its scheduled competition. With nearly every girl with a ‘B’ on one cheek and a ‘4’ on the other, signifying his moniker referred to by many that knew him – along with his baseball and basketball numbers – their support was blatant and forthcoming. The assembled crowd easily had to have surpassed 100 into the cozy seating area on Valley’s side of the field. And it wasn’t just the prototypical moms and dads. Nearly every baseball player was there. A host of Valley sports coaches were in and out, and not just spring coaches.

In what has unfortunately been attached to the Valley community the past few years, perhaps a decade or so, they had to rally around one another again in the wake of a tragic loss. What is more impressive in this day and age when technology rules the roost, not one Valley softball player found out about the news until the final out of the 4-1 loss to the Braves.

Mercedes Snapp drove in Valley’s only run on a single in the first, bringing home Molly Moriarty. But as luck would have it for the Vikes, the team hit too many at-em balls, and saw a leadoff triple by Snapp in the sixth go to waste when Maconaquah doubled her off at home on a nicely executed double play to erase a threat.

As the game ended, though, the looks on the baseball player’s faces told the bigger story as they headed for the field for a postgame prayer.

“I picked on him a lot, knowing him personally as a teacher, it’s been rough on me,” said Valley softball head coach Brittany Mathias. “I hurt more for my girls, I saw them hurting all day, and then out here. You just want to hug them and hold them. Getting ready for a game, you look at the crowd, half the community was here because they knew the girls were going to need it.”

As Maconaquah turned their postgame focus to kneeling in silent prayer as Valley baseball and softball programs united in the middle of the infield, human element once again took over.

“There’s no manual in how to handle this,” said a red-eyed Valley athletic director Aaron Butcher as players found moms and dads for consolation.

Butcher gathered himself after a few moments and offered, “Brendyn was a great kid. He was selfless. He didn’t care how many points he scored or how many hits he had in a game, if the team won he was happy. Brendyn celebrated his teammate’s success as much as his own. Brendyn will certainly be missed here at Tippecanoe Valley.” 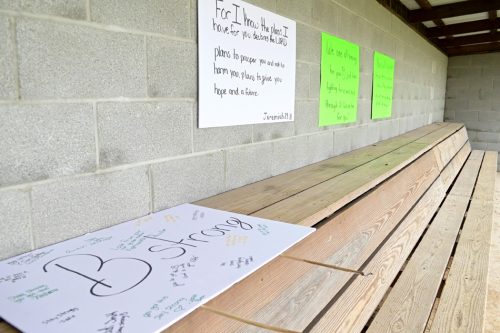 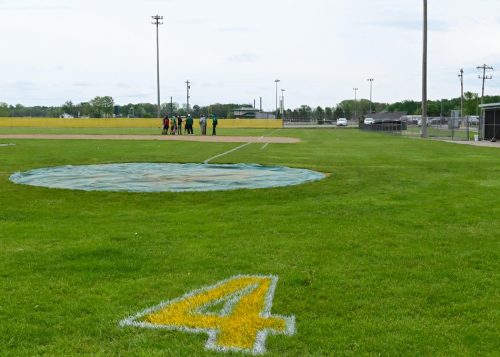 Valley baseball painted Brendyn Stump’s ‘4’ on its field Monday. In the background, the team is finding out the unfortunate news of Stump’s passing. 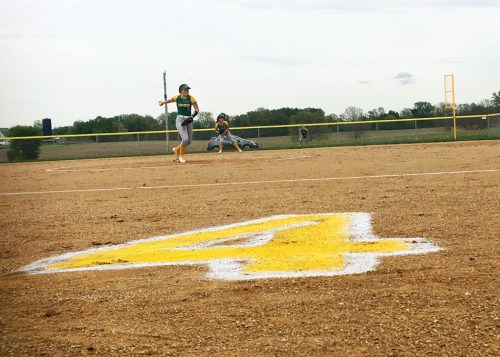 Valley softball had Brendyn Stump’s ‘4’ on its field Monday. 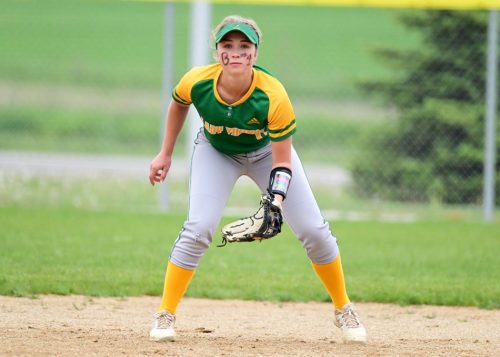 Valley shortstop Brayden Baney, like her teammates, played with ‘B’ and ‘4’ painted on her face in show of support for her peer, Brendyn Stump. 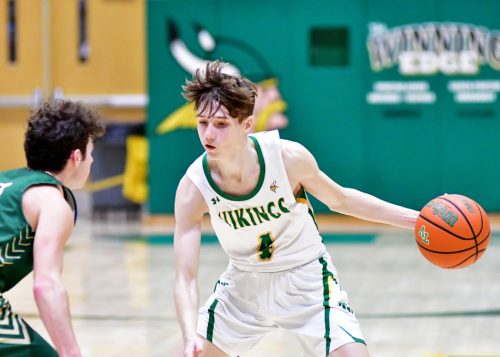 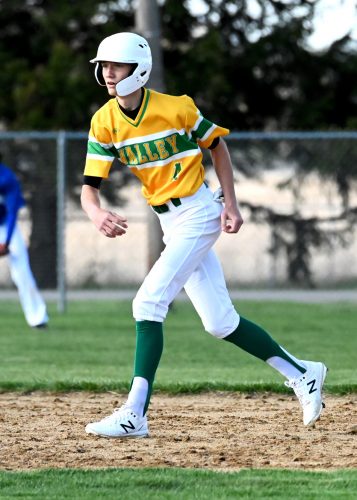