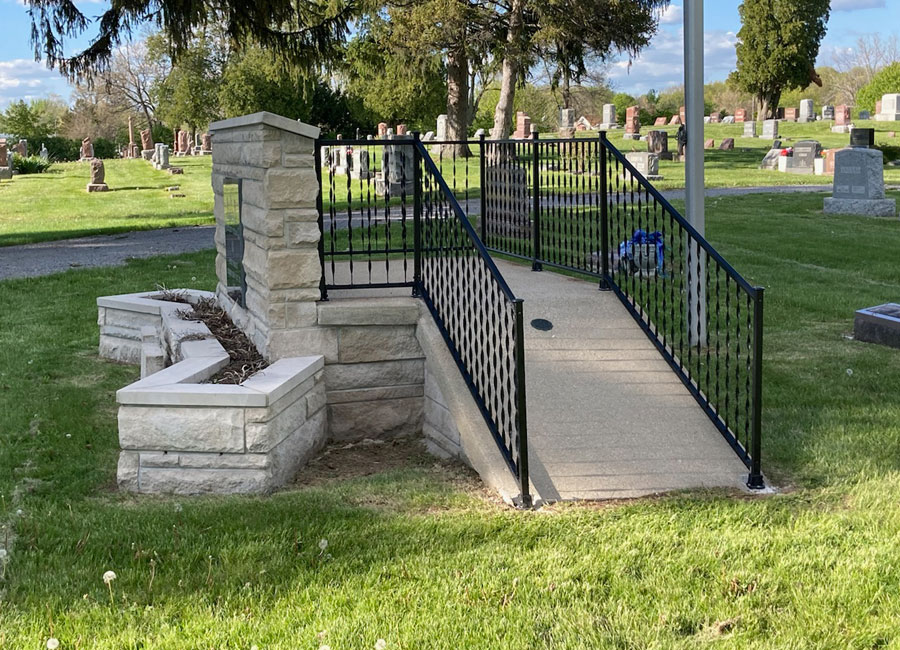 The review stand in North Webster Cemetery has been outfitted with new railings. Scott Gerke installed them. Clean up is going on in all four Tippecanoe Township owned cemeteries in anticipation of Memorial Day the township board learned at its May meeting. Photo provided.

Resolution 2021-3 was approved regarding free grave sites for military personnel and emergency responders in the township managed cemeteries. These are Mock, North Webster, Oak Grove and Shock cemeteries.

According to the resolution, “United States Armed Forces consists of the Army, Marine Corps, Navy, Space Force and Coast Guard.” No mention was made of the Air Force. The deceased must be active duty or honorably discharged.

Emergency personnel are law enforcement, fire department and emergency medical service personnel with a minimum of 20 years of service. The deceased must have resided within the township boundaries. The associated costs of grave opening, closing and established cemetery rules still apply.

NIPSCO has informed the township trees will be trimmed on the east side of North Webster Cemetery to protect the lines.

“Health insurance bids for 2022 will be open for competitive bidding,” noted Francis. Smith asked the current carrier send representatives to the next meeting. The board approved $2,000 per current employee to be added to health insurance accounts for 2021.

The board approved asking the town of North Webster to pay half the consultant fees for the new fire territory and transfer of the township owned ball fields on Blaine Street to the Wawasee Summer League, a non-profit youth baseball organization. Francis thanked Mike Kissinger for his assistance in survey work on the ball fields.

It was noted the operating budget has been submitted to the state and a payroll issue was corrected with the board’s permission.

Assistant North Webster Fire Chief Dave Rensberger brought several photos and a concerning issue to the township board. Water damage has been observed in the walls and floor of the fire station, particularly on the north side. There is not room for a person to pass through between the station and the building to the north. It is owned by Classy Canines LLC, doing business as The Dog House according to Kosciusko County tax records.

The board agreed to foot the bill for inspection of the fire station’s structural components to determine where the problem was originating and what can be done about it. “Get back to us with the results,” said Smith.

Some issues with radio reception were reported by Rensberger. He feels when the new towers are up and running things will improve. There were 58 EMS runs, 15 fire runs and four runs to Noble County during April.