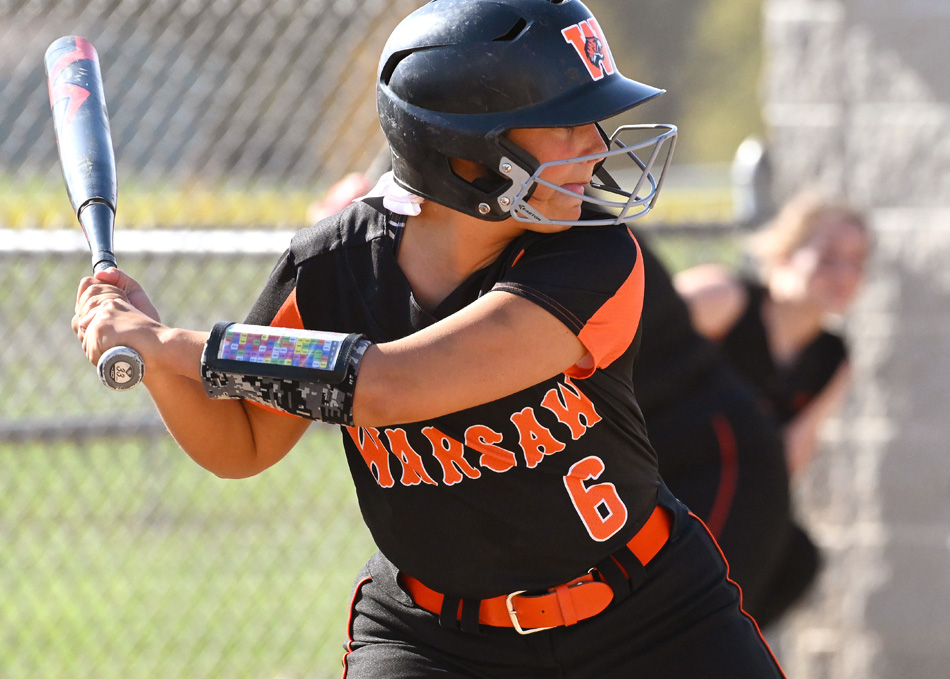 Warsaw continued its roll in the Northern Lakes Conference with a dime of Plymouth in Tiger Town.

Mia Wojcik was a bright spot for the Pilgrims with a pair of homers and three runs driven in.

Lauren Duncan was light’s out for the Warriors (15-4, 6-0 TRC) in a dominant performance Monday evening in Denver.

Duncan fired a one-hitter, walking one and striking out 11 on just 77 pitches.

At the plate, Duncan helped her cause with an RBI triple while Taylor Tinney and Reese Hoover both had two hits and two RBI.

Abby Bowers had Valley’s (9-9, 2-4 TRC) lone hit while Corinna Stiles struck out eight in the losing effort in the circle.

The Trojans dropped its third straight in the Hoosier North Athletic Conference Monday against Culver.

Triton struggled in all facets, committing five errors, giving up 10 walks and allowing 10 hits while the Cavs built its dime.

The Pilgrims hung a crooked number in the sixth to pull away from the Tigers at Bill Nixon Field.

Plymouth scored four runs in the sixth to claim a six-run lead to hold off the Tigers.

Cam Shively, Michael Sheely and Tanner Feece all had two RBI and Bradey Pittman added a double and a run for the Pilgrims.

Alex Light doubled twice among his three hits and drove in two. Joey Springer had a hit, two walks and a run scored and Kyle Showley threw five innings for the Tigers (7-11, 4-5 NLC), on the short end of four Ks and no earned runs allowed.

NorthWood (11-5, 6-3 NLC) moved into second place in the conference standings with a victory in Syracuse.

Wriley Symons and Karson Kirby combined to pitch a two-hitter at the Warriors, walking four but fanning five. Symons helped the cause with a triple and three RBI while both Jacob Raasch and Gage Gongwer each drove in two.

The two JV teams played shortened ends of a doubleheader, Wawasee winning game one 3-2 and game two 5-2. For the Warriors, Cole Turner had four hits, two doubles, three stolen bases and an RBI in the two contests and Zach Griffith swiped four bases and scored a run in the first of the two games. Turner and Kaleb Salazar earned the wins on the hill.

Valley saw Owen Kirchenstien step forward with a quality pitching effort to help the Vikes (8-7, 3-2 TRC) to a road win.

Kirchenstien allowed just one hit and one walk in the complete game shutout. That was absolutely necessary as Valley didn’t plate the game’s only run until the top of the seventh when Noah Prater scored on a wild pitch. DJ Estep and Annikan Pettit had hits for the Vikes.