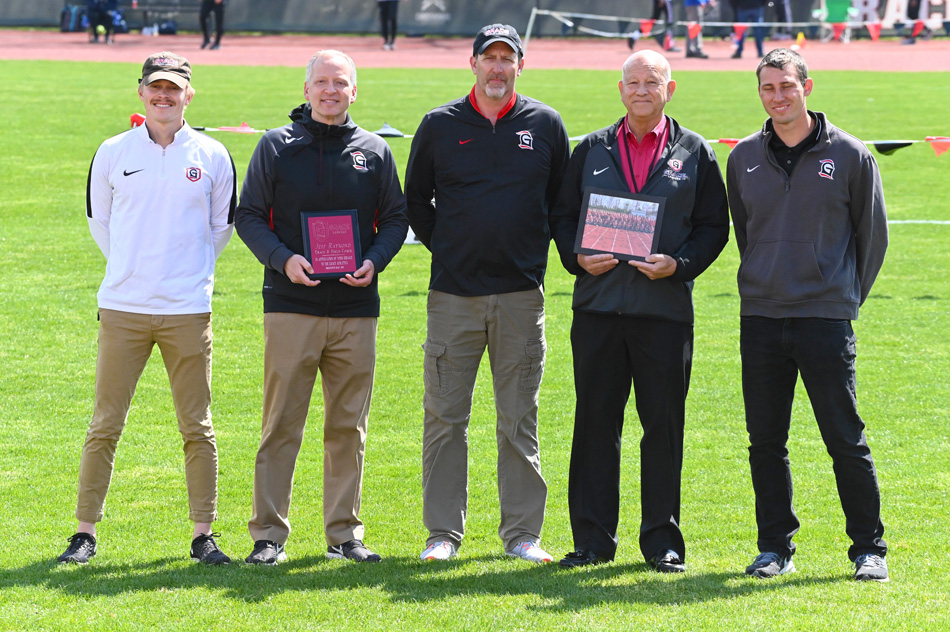 WINONA LAKE – It wasn’t quite the victory tour some coaches experience after announcing their pending resignations. But Friday’s final day of the Crossroads League Track and Field Championships was a perfect setting for Jeff Raymond to say his goodbye.

Raymond, the longtime track and field coach with the Lancers, announced earlier this year he is resigning from the post after 11 years with the track program. Also coaching cross country in Winona Lake for several years, Raymond chose to step down from the post in lieu of accepting a position with the Grace College sports information department.

“I’ve been involved with collegiate track and field as an athlete or coach for almost every year since 1983,” stated Raymond. “Along the way, however, I worked in media relations for more than 15 years. Stepping back into that world is something I’m looking forward to. I genuinely enjoy a wide variety of small-college sports and feel I have a good insight into what the players and coaches go through because of my past experiences.

“I hope I can take a little pressure off Josh Neuhart and an SID job that can easily become a 24/7 endeavor. While all the specifics of the job are still in the works, I will most likely cover selected sports at Grace, write game stories and post information online. I also hope to write a feature story every month, highlighting a specific athlete or coach.” 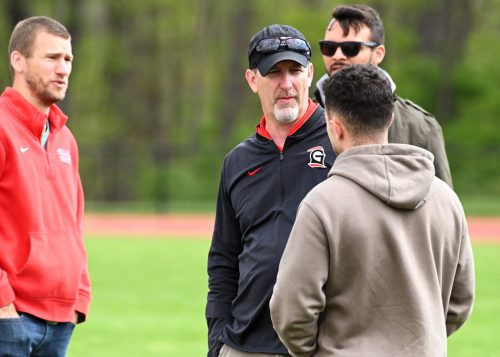 Jeff Raymond speaks with members of his track team Friday morning at the Crossroads League Track and Field Championships.

The SID office at Grace largely has been a one-man operation with Neuhart getting selected help from student interns and the occasional grad class helper. But the office will now get Raymond’s professional service, to which Neuhart has already been honored by CoSIDA as one of the top outfits in the country.

“Our coaches and student-athletes will be immediately impacted by having Jeff join our athletics communications staff at Grace,” said Grace Assistant AD/SID Josh Neuhart in a statement earlier this spring. “His experience and organization will greatly enhance our communications efforts, and I’m thankful to be able to serve alongside him.”

Raymond, however, hasn’t had much time to rearrange the desk and filing cabinets. Grace is currently working through the final weeks of its track and field regular season, Friday in the second day of the Crossroads League Track and Field Championships. The NCCAA National Championships are set for next weekend and the NAIA’s are at the end of the month, both of which Raymond expects to have athletes eligible to compete.

Transitions will have to wait.

“Honestly, I haven’t had much to think about it,” Raymond said. “The next few weeks are the biggest part of our track season, and that takes most of my time and focus. The fact that I will still be at Grace, working with the same people and in the same surroundings, makes this career move more of an easy transition instead of a major change in direction.”

In the meantime, Grace honored Raymond with a brief ceremony Friday morning at day two of the Crossroads League Championships. It was a small gesture for a broad body of work Raymond has achieved at Grace, including seeing through a pair of NCCAA titles from area athletes and a myriad of program records.

“We’ve been blessed to have some local athletes be part of our teams and several have competed at a high level,” stated Raymond. “Johanna (Boren) Palladino came from Lakeland Christian and ended up setting several records and being a conference champion in the 400 meters. Tommy Hickerson (Warsaw High School) won league and NCCAA titles in the javelin. Walker Hobbs joined us from Whitko and set a school record and won an NCCAA title in the shot put. Our current athlete, Heather Plastow (Lakeland Christian), became the first female individual track and field NAIA All-American in school history earlier this year at indoor nationals when she placed fourth in the mile. She was recently named the Grace Female Athlete of the Year.”