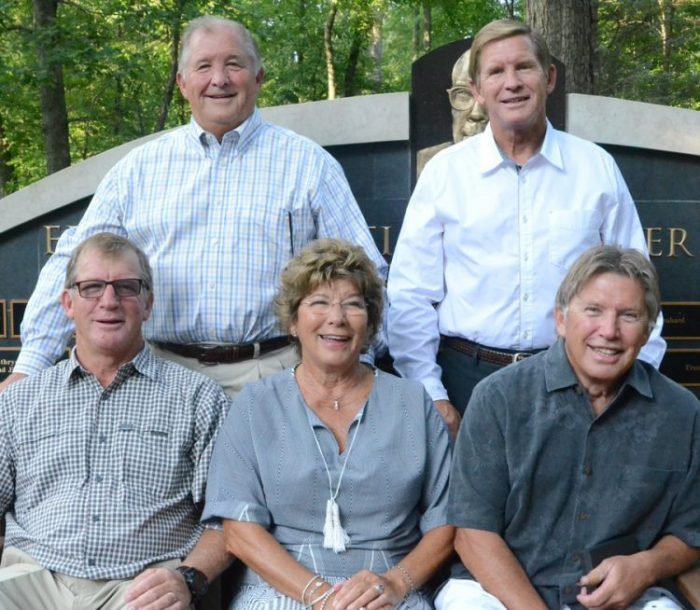 Shown are five of the six Herdrich siblings. Seated in the front, from left, are Jeff, Jan Herdrich Hackleman, and Chris. Standing in back are Bill and Bob. Not present is Joyce Herdrich Wilke.

SYRACUSE — Since the early 1900s, succeeding generations of the Herdrich family have played an integral role in the Lake Wawasee community. In recognition of a century of involvement, the Wawasee Flotilla Committee chose the Herdrichs to be commodore of the 60th Wawasee Flotilla taking place July 3.

“We were excited,” said Jeff Herdrich, the second to the youngest of six siblings, the children of Jim and Joyce Ruth “Jinks” Herdrich and a fraction of a large, extended family spread across the country. “It’s the first time they picked a family … There’s so many we don’t want to single anyone out.” Six generations of Herdrichs had their first experiences with water on Natti Crow Beach. “It was our vacation area instead of Florida.”

This is not the first time the Herdrich family’s efforts on behalf of Lake Wawasee have been recognized. In 2017, they were inducted into the Wawasee Area Conservancy Foundation Eli Lilly Lifetime Founders Society.

The first Herdrich on Lake Wawasee was a great aunt, Annie Kolb Herdrich, whose husband owned a “fishing shack” on Natti Crow Beach when the area was platted in 1918. Family members visited regularly and began renting other shacks along the beach south of the Crow’s Nest, eventually expanding into buying lots on Natti Crow Beach in the late ‘30s.

Jeff remembers a different Lake Wawasee in the 1950s. “When I was little there were a lot of fishing shacks … it’s wall-to-wall houses now.” One thing has remained constant, however. “It’s always been a sporting lake.”

And it was the sport of sailing, no motor, just the wind and water, they were particularly drawn to. “My father said you just need to go out and sail if you want to truly enjoy the lake and get close to Mother Nature,” Jeff recalled.

Jeff’s father Jim and uncle, Frank, both World War II pilots, were instrumental in building the lake’s E-Scow sailboat fleet around 1950. “A good gust of wind and you were slapping across the lake … you had to know what you were doing or you’d be upside down.”

“Uncle Frank and Dad rescued a lot of boats,” Jeff recalled. This was before cranes and official emergency personnel. His father always carried binoculars and was ready to help, often bailing out boats with trash cans.

Jeff’s oldest brother, Bill, went on to win numerous sailing competitions, at the local and national level. These days he pilots the rescue boat for Wawasee Yacht Club regattas.

Jeff, who characterizes himself as a “cruiser” rather than a racer, has been a WYC junior sailing instructor for 13 years, showing roughly 150 children ages 8 to 15 how “the wind controls everything.”

Jeff’s sister, Jan Herdrich Hackleman, was the first in the family to become involved with Wawasee Area Conservancy Foundation, and Jeff joined shortly after. He has been WACF land manager for eight years and earned the Cattail Award. It is thanks in part to the efforts of the Herdrichs and others that, as Jeff observed, “The water is still clear.”