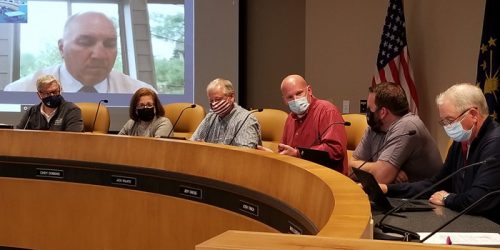 Warsaw City Council’s meeting Monday, May 3, was the first time in the past year in which council members sat in their normal council chamber seats without exercising social distancing. Everyone in the room, though, continued to use masks. Pictured from left are Mayor Joe Thallemer and council members Cindy Dobbins, Jack Wilhite, Jeff Grose, Josh Finch and Michael Klondaris. City Attorney Scott Reust is pictured on the screen. InkFreeNews photo by Dan Spalding.

WARSAW – Three months after Mayor Joe Thallemer pledged to look at hiking city police salaries, the city council took its first step toward doing so on Monday, May 3.

Thallemer and a three-person wage committee threw their support behind a plan that would boost all officers’ pay by $200 per two-week pay period.

The change represents a 10% increase in base pay, which amounts to $200 more every two weeks.

The increases would cost the city $187,000 annually if the department was fully staffed with 42 officers, according to Jennifer Whitaker, the city’s director of human resources.

What is being considered right now is a pay hike for the second half of 2021 for 32 officers, Whitaker said.

The proposal received unanimous support in a preliminary vote and would take effect in late June with a second vote expected later this month.

The city’s Board of Works and Safety would also have to approve the change.

The rare mid-year salary move for an entire department is an attempt to make city openings in the police force more competitive with other nearby police agencies, Whitaker said.

The proposal comes as Warsaw copes with a nationwide difficulty in recruiting new officers.

Whitaker said their new officers with the city often become targets of headhunters trying to lure them away with better pay.

“We really have to get aggressive with these wages for these officers and this is a good start,” she said.

No changes in rank pay are part of the plan, she said.

The wage committee looked at the salaries of other nearby communities while researching the issue.

“It was quite an eye-opener to see that we weren’t really measuring up to the task in what we were paying our base patrol officers,” Dobbins said.

“Once we delved into it, we just had to make this effort,”  she added.

Quance said they will revisit the ordinance again next year.

Officials also acknowledged that the city is looking at other changes in salary to improve competitiveness.

The committee was “seeking to make reasonable increases that we can sustain over a long period of time,” Quance said.

In another matter, the council voted to create a fund to “park” the estimated $3.1 million being sent to the city after Congress approved the American Recovery Act.

Thallemer said the city and other recipients of the COVID-19 relief package are waiting for details on how the money can be spent. He said he and other government leaders, including Kosciusko County officials, will work together to determine how best to use the money.

Kosciusko County, the city of Warsaw and other towns will receive a combined $21 million from the relief package dubbed ARP.

Half of the money is expected to arrive within weeks and the remaining portion within the next year.

Receiving the money, Thallemer said, is not a commitment to spend the money.

Plans for how to use the money will eventually be presented to the council.

Thallemer said last week there is no rush to use the money. The deadline to spend it is 2024.